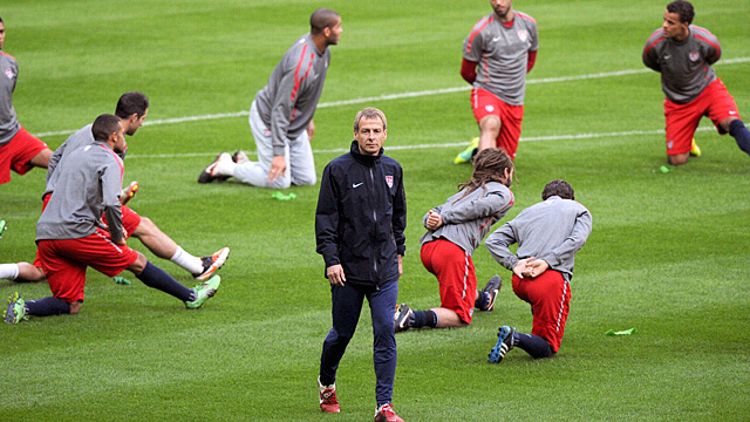 When Jurgen Klinsmann took over the United States men’s national team in the summer of 2011, United States Soccer Federation president Sunil Gulati tasked the former German star with two objectives: (1) qualify for the 2014 World Cup in Brazil, and (2) remake the American program in an effort to turn a middling soccer nation into something resembling a world power.

Twenty months into the experiment, Klinsmann has succeeded in some areas and failed in others. It’s been a battle, partly because those two goals come into conflict with each other. The need to win now butts against the development of players for the future. The head coach talks about imposing a system of high-pressure soccer, complete with skillful, one-touch passing. But changing a style and a culture while raising the overall level of talent takes time. And time is a luxury the squad doesn’t have if it plans to reach Brazil ’14.

To some observers, including yours truly, recent positive results — albeit ones that came during a blizzard and in inhospitable Azteca Stadium — show the German’s pragmatic side coming to the forefront. “[Rather than enforce a style] I think it’s much better to find a system ad hoc that suits the players that you have. I think that’s a lesson that Klinsmann is learning because he’s started to get results again,” says Leander Schaerlaeckens, a Fox Soccer columnist. “How has he done that? By going back to the old, bedrock American way of good organization, good work ethic, and grinding your way to results.”

Which is great. Good results, even ugly ones as the previous two matches very much were, are great. But it does raise questions about where the U.S. goes from here and how Klinsmann’s long-term vision fits into the short-term narrative of the American team. How does he balance the needs of now with those of the future?

Klinsmann’s most successful stint at the top of a program came when he remade Germany before the 2006 World Cup. He helped broaden the player pool, increase depth, reform the club system, and assist in other sweeping changes. Basically, he did everything he’s been asked to do for the U.S. program. However, his deputy, Joachim Low, was the man overseeing the day-to-day drudgery of actually coaching the national team, developing the tactics, and implementing the strategies. Klinsmann, for all his visionary qualities, doesn’t do details. In many ways, he’s better suited to a technical director role but that position doesn’t really exist on an international stage.

So he’s caught between two jobs. “The problem we see with Klinsmann is that he’s been given this sweeping mandate,” says Jason Davis, host of American Soccer Morning. “When he was hired, [the development] was the more important part of his job, but the United States is in this position where they have to scrap for every point and maybe he’s not the guy to do that.”

The rest of CONCACAF is improving, making this the most difficult World Cup qualifying cycle since the U.S. became a regional power. This new reality makes it harder to experiment with new styles in important matches. The organizational structure of the national team — where the coach is akin to a “cruise director,” in the accurate words of Davis — offers little time for dramatic changes.

Klinsmann, ironically, might also be guilty of overcoaching, not so much in terms of tactics but with running, training, and scheduling. From the beginning of his tenure, players have spoken about (overly?) structured camps, a stark contrast from previous coaches who gave their charges more freedom and downtime. The rigid schedule is part of how Klinsmann wants to transform the program into a more professional outfit, but it might be too much, too soon.

“The head coach’s job as I’ve understood it is to call up the right guys, keep them happy, keep them healthy, and to find tactics that fit during those few weeks out of the year that they are in your care. It’s not all that much of a coaching job. Klinsmann has made it that,” Schaerlaeckens says. “What you see at practices is that he’s really trying to improve a player’s skills and qualities, but does he really have the time for that? He’s trying to cram as much into a day as possible but I wonder if that’s really the way to go.”

“He thinks there’s all this potential — and I do, too — but I’m not sure he can do what he thinks he can do in the timeline he has,” Davis adds.

The current head coach might do well to adopt some ideas from his predecessor. “I think [Bob] Bradley was better at this,” Schaerlaeckens says. “He brought in players who were going to work well together, who were going to fit certain roles in the larger scheme, who suited the overall needs of the majority of the team. He created a critical mass and then he found parts that fit it. Sometimes that meant leaving out some of the better players, but he better resembled that traditional role of the national team manager.

“Maybe Klinsmann is trying to reinvent it, and credit to him, but I think that sometimes he tries to do way to much.”

The last few months suggest Klinsmann has started to realize he needs to do less, to focus more on the individual battles of the Hexagonal and less on the great Future of American Soccer war. For now, that’s the right answer. The future can wait; Brazil, however, won’t.