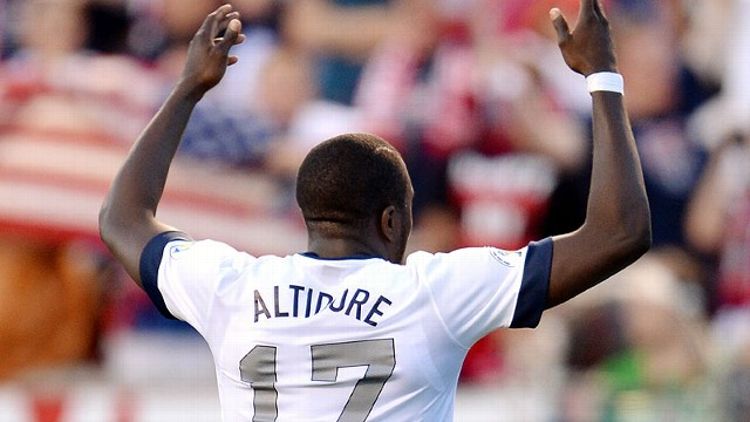 In the end, the quietest man on the field made the loudest statement. Jozy Altidore, who has stopped speaking to the media, scored in the 73rd minute to give the United States men’s national team a 1-0 victory over Honduras in Sandy, Utah’s Rio Tinto Stadium. The win, which leaves the Americans on top of the final “Hexagonal” round of CONCACAF World Cup qualifying with 13 points after six of 10 games, exacts a measure of revenge for February’s loss in San Pedro Sula and virtually assures the team a place in Brazil.

If an international soccer team is measured by results — which it is — Tuesday night was nothing other than a success. Combine the victory with a friendly win over Germany and two qualifying triumphs against Jamaica and Panama, and Jurgen Klinsmann’s squad has had a damn fine month. It is, after all, impossible to earn more than nine points in three World Cup qualifiers. Sixteen points will almost certainly be enough for one of CONCACAF’s automatic slots and 19 points definitely will. Qualification could easily come at home in September against Mexico, which would be sweet indeed.

If an international soccer team is measured by one game — which it also is — the match in Utah was less successful. The Stars and Stripes did not play as sharply in Real Salt Lake’s home as they did a week ago in front of 40,000 Seattle Sounders faithful. The team created a number of chances, especially in the second half, and was unlucky not to score earlier, but it also looked out of sorts against a personnel-depleted yet stout opponent. Whereas Panama came out and attempted to take the game to the U.S., the Catrachos forced the Americans to try to break them down. The first half turned into a war with failed crosses minimizing any scoring opportunities.

From the sideline, and presumably at halftime, Klinsmann excoriated his charges to play faster, faster, faster. The screaming paid off as the passes grew quicker, the creativity crept up a notch, and the pressure mounted. (Honduras, it seemed, started to believe it could score, which stretched the proceedings a bit as well.)

The goal came during one of these bursts. Michael Bradley reversed his momentum near midfield and gave a quick pass to Clint Dempsey, who took a touch then hit a casually elegant ball with the outside of his right foot. Graham Zusi, dangerous all match with his crossing, brilliantly dummied the effort, which found its way to a streaking Fabian Johnson. The Hoffenheim left-side player one-timed a pass to Altidore, who didn’t miss. It was the forward’s fourth straight game with a goal after going an astonishing 18 months without finding the back of the net for the U.S., despite tallying scores seemingly at will for his European club team, AZ Alkmaar.

Altidore is a Miami Heat fan, which is fitting since he’s the closest thing the U.S. soccer program has to LeBron James. In 2007, I watched the then-17-year-old answer questions during the New York Red Bulls’ media day. The fluidity of his movement struck me more than anything. In a roomful of older, stronger, more accomplished pros, he stood out as the best athlete by far, someone who possessed a grace that isn’t teachable, and an intuitive understanding of where his body parts were and what they were doing at all times. In other words, he moved like a mini-LeBron, which is amazing because he’s 6-foot-1 and rock solid.

Fast-forward to Sandy, and that athlete has become a soccer player. Altidore matured, figuring out the game and adding a mental component to his physical gifts. He’s been developing for some time now at the national team level — each match he got a little better, even when he wasn’t scoring — and Klinsmann said he saw this breakout coming. Whether that’s true or not, Altidore finally arrived in full. The 17-year-old man-child is now just a man. (Note: This is absolutely not an argument for why basketball players would make the best soccer players. If anyone brings up that tired trope in the comments, you have my permission to yell at them. Nicely, of course.)

Ultimately, an international soccer team in the midst of attempting to reinvent itself on the fly during a World Cup cycle is measured by on-field progress. By that metric, the five-match stint was nothing other than a success. Even the first game, an ugly loss to Belgium, produced some nice, and much-needed, finishing. The Fabian Johnson–at–left midfield experiment proved successful, as did the Graham Zusi–as–Landon Donovan-light research project. Dempsey didn’t score, but he was always lurking and the best part was the Americans didn’t need him to get his in order to win. Bradley grows better with each passing game. Eddie Johnson, Brad Davis, and others add depth off the bench or in case of suspensions. Mostly, the red, white, and blue have an identity, something they had been lacking under Klinsmann.

Still, questions linger. Matt Besler lapped Omar Gonzalez at center back. The Los Angeles Galaxy star continues to show occasional lapses that haven’t hurt too much against CONCACAF competition but could be deadly when the teams get better. (Hey, terrible giveaway against Belgium!) Klinsmann loves Jermaine Jones, but he and Bradley struggle to space themselves correctly. Geoff Cameron needs to be on the field, either as a center back or a central midfielder, but whom does he replace? What to do about right back, with Steve Cherundolo and maybe Timmy Chandler returning, and Brad Evans definitely available but maybe not good enough? While we’re there, does DaMarcus Beasley really start at left back in Brazil? And, always, the Donovan conundrum.

But Klinsmann has time to juggle more lineups, meditate on starting XIs, and ponder other questions during long walks on the SoCal beach, because the U.S. doesn’t play another World Cup qualifier until September, when the squad goes to Costa Rica and then takes on Mexico in Columbus. While the Gold Cup starts on July 7, it’s a lesser tournament that will give the head man chances to experiment with some lesser lineups. But he’s earned a brief break. The Americans sit two points clear of second place and five ahead of El Tri. That’s reason enough to scream with joy.

10 Key Thoughts on the Greatest, Most Insane NBA Finals Game in Years