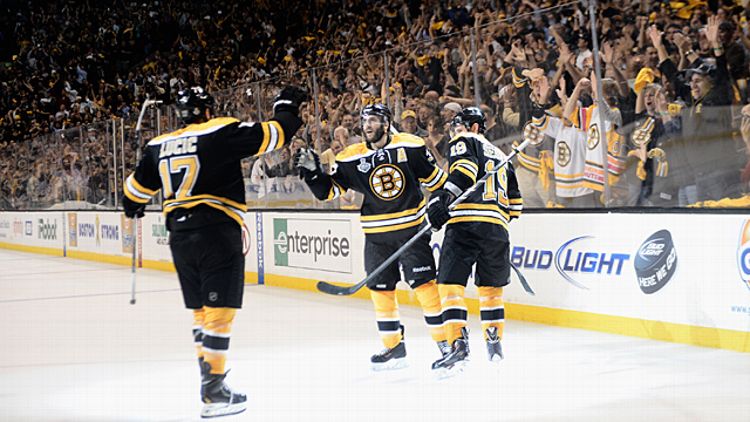 The Boston Bruins are starting to look unstoppable. After shutting down the Chicago Blackhawks on Monday night, they hold a 2-1 series lead in the Stanley Cup final heading into Game 4 at home tonight. They’re two wins away from a championship that would cap off one of the most impressive playoff runs in recent history.

Heading into tonight’s action, here’s how those teams have fared against Boston:

Without putting too fine a point on it, those numbers don’t make any sense. How could the Bruins be rolling over three of the best teams in the NHL so easily, when they needed a historic Game 7 comeback just to survive against a very average Toronto team?

Or, to rephrase the question in a more intriguing way: Is it possible that the Leafs knew something that everyone else has missed?

I floated a version of the question — What the hell happened in that Leafs series? — on Twitter a few nights ago. Here are some of the most common theories I got back in response, and my thoughts on whether there could be some truth to them.

The theory: Obviously the Leafs are the second-best team in the league!

The explanation: Right now, the Bruins look like the best team in the league. And since the Leafs were the only team to come close to beating them, then logically that would mean …

Does it make sense?: No. Also, this is stupid. Next.

The theory: OK, fine, nobody really thinks the Leafs are second-best. But maybe they were better than we all thought.

The explanation: Even the most optimistic Maple Leaf fans must realize that the team isn’t a contender yet, but what if they’re closer than everyone thinks? Or at the very least, better than that “very average” tag I dropped on them a few paragraphs ago?

Does it make sense?: While not as dumb as the first theory, this one isn’t much better. The 2013 Leafs were what they were: an awful possession team that relied on a top-10 caliber goalie and plenty of good luck to make the playoffs. They’re young, they have a decent amount of skill, and they can play a physical style. But are they better than the Rangers, Penguins, or Blackhawks? Maybe New York, if you really squint through a pair of rose-colored lenses. But Pittsburgh and Chicago aren’t even in the same ballpark.

And yet, the Leafs gave the Bruins fits. Something else must be going on here. Let’s dig deeper.

The theory: The Leafs were tough enough to match Boston’s physical game.

The explanation: The Bruins are an intimidating team, so much so that these days it’s practically become mandatory to add “Big Bad” in front of their name on first reference. But the Leafs were pretty tough themselves — they led the NHL in fighting majors and it wasn’t close — and they used players like Colton Orr to target Bruin stars like Zdeno Chara. The Rangers, Penguins, and Blackhawks weren’t as well suited to that type of game, allowing the Bruins to dominate those series physically.

Does it make sense?: On the surface, sure. But the problem with the theory is that the Leafs-Bruins series wasn’t all that physical. Given that the two teams were division rivals who had some history from seasons past, it was actually remarkable how little bad blood seemed to surface.

If anything, with the exception of targeting Chara, the Leafs seemed to play less physically against the Bruins than they typically did during the regular season. In fact, after the first two games the Toronto-Boston series was downright docile by playoff standards.

So maybe we need to flip this one around …

The theory: The Leafs didn’t get suckered in to trying to play Boston’s style.

The explanation: Rather than try to beat the Bruins in the alley, the Leafs threw them a curve by focusing on beating them on the ice.

Does it make sense?: The other three teams the Bruins have matched up with all seemed oddly intent on demonstrating that they could match Boston’s physical game. The Rangers promised a physical war, then were bounced in five games. The Penguins often seemed obsessed with proving that they could go toe-to-toe with the Bruins, and they failed miserably. Chicago dressed tough guy Brandon Bollig for Game 2, only to see his failed clearing attempt lead to Boston’s OT winner.

The Leafs, meanwhile, didn’t seem all that concerned with proving their manhood. They didn’t back down from physical play, but they didn’t go out of their way to initiate it. There may be a lesson there: You can’t intimidate the Boston Bruins, so focus your energy on something else. But what? Let’s keep going …

The theory: The Leafs’ speed created problems for Boston.

The explanation: Toronto is a surprisingly fast team, with even some of its less-skilled players being able to skate well, and Boston had trouble matching up.

Does it make sense?: There’s no doubt that the Leafs’ speed did create problems for the Bruins at various points. And that was especially true once injuries forced Toronto coach Randy Carlyle to finally dress defenseman Jake Gardiner, who may be the fastest Maple Leaf blueliner.

By comparison, the Rangers’ own coach called them slow against Boston, and the Penguins’ vaunted deadline acquisitions consisted of older, more plodding players. But on the other hand, Chicago is an exceptionally fast team, and so far they haven’t been able to show it much against Boston.

The theory: The Bruins couldn’t handle the Leafs’ forecheck.

The explanation: The Leafs committed to their forecheck, creating turnovers and hammering away at the Bruins’ defensemen.

Does it make sense?: Effective forechecking is basically the combination of speed and physical play, so given the last few sections, it would make sense that the Leafs would be strong here, too. And it was clearly an area of emphasis in the series for Carlyle, who loves to dump and chase. When it wasn’t Orr flying in for another kamikaze mission into Mount Chara, it was some other Leaf forward making sure to finish a check.

Did it help? Sure. The Leafs’ forecheck created occasional offense and helped wear down the Bruins blue line.

But it’s not like the Leafs are the only team to come up with the idea of forechecking hard in the playoffs. John Tortorella was notorious for his emphasis on the Rangers’ forecheck, and the Penguins had been extremely effective on theirs in Round 2 against Ottawa. The Leafs did fine in this area, but so has everyone else who matched up with Boston. So our search continues …

The theory: The Leafs went to the net and got traffic in front of Tuukka Rask.

The explanation: Toronto knew it didn’t have the skill to sit back and snipe on Rask from outside, so it planted a guy in front of him and looked for deflections and rebounds.

Does it make sense?: The Leafs certainly seemed more eager to try this against the Bruins than they did during the regular season, when they were often criticized for a reluctance to pay the price in front of the net. And it did work, especially in a Game 6 win when both Leaf goals came because of getting traffic in front of Rask.

But much like a strong forecheck, this isn’t exactly a unique strategy. Almost every team vows to go to the net during the playoffs, especially when facing a hot goaltender, and each of Boston’s other opponents have talked about doing so at some point. (For an example of it working, see Game 1’s pinball winner, as scored by Andrew Shaw’s shin pads.)

If going to the net was all it took to beat the Bruins, they’d have been golfing weeks ago. We’re starting to run out of options here.

The theory: Forget about the Leafs — the Bruins underachieved all year, then finally woke up.

The explanation: Boston just wasn’t the same team during the first round, not to mention much of the regular season. Maybe Toronto didn’t really do anything special beyond being in the right place at the right time to (almost) take advantage.

Does it make sense?: When I posed the question on Twitter on Monday, Leaf supporters and neutral fans offered up most of the theories above. But this one was the overwhelming response from Boston fans: The Bruins just flat-out stunk for much of the season, and the near-disaster against the Leafs was the wake-up call they needed.

It’s not like all the Bruins were slumping in Round 1 — David Krejci was pretty much unstoppable — but the team did seem off at times. Patrice Bergeron only had one point through the series’ first six games, Brad Marchand didn’t score at all, Tyler Seguin managed only one assist, and Chara was merely very good instead of outright dominant.

And perhaps most important of all, Rask was solid against the Leafs but then caught fire as the playoff wore on. And we all know that on any list of the five keys to winning the Stanley Cup, having a hot goalie is four of them.

So maybe “What did the Leafs do?” isn’t even the right question in the first place. Maybe it’s really about what the Bruins weren’t doing, but are now.

So after all that, have we figured out how to beat these guys?

In the end, the answer probably lies in some combination of “all the above,” arranged in increasing order of importance.

The Leafs were a decent team, who were physical enough to withstand the Bruins’ muscle but not dumb enough to try overpower it. They skated hard, they forechecked well, and they were more than happy to crash the net and score ugly goals. Combine all of those factors with a slumping Bruins team that couldn’t seem to get out of first gear, and you had the recipe for an upset.

That upset didn’t come, of course, and now here we are. The same Bruins who were two minutes away from a first-round exit are now just two wins away from the Stanley Cup.

It goes without saying that the Blackhawks aren’t dead yet. They could certainly stay the course and still win the series, because they’re a fantastic team that’s good enough to beat any opponent in the league on a given night.

But if they’re thinking of making some adjustments and are looking for a blueprint, they could do worse than revisiting the first round. The Maple Leafs haven’t won a championship of their own in almost five decades, but they may yet hold a few of the keys to wresting this one away from the Boston Bruins.