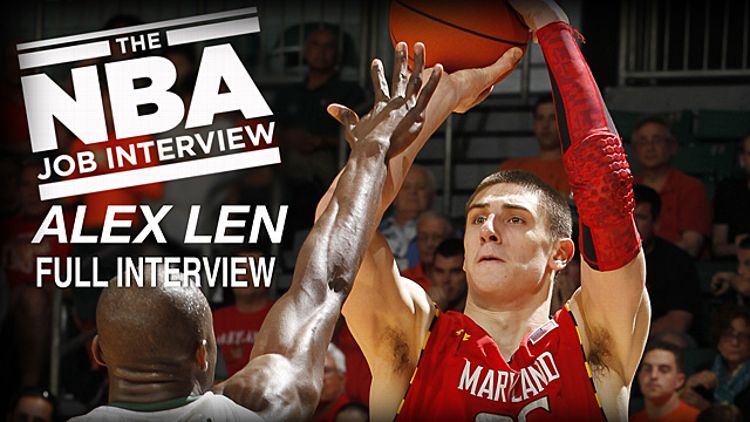 Jalen Rose and Bill Simmons question NBA draft prospect Alex Len about his injury, his adjustment to life in America, and his girlfriend, who can dunk. Check out a short clip below, followed by Brett Koremenos’s scouting report and the full-length video. Watch all the NBA Job Interviews here. And be sure to watch this space for more NBA Job Interview videos, featuring Bill Simmons, Jalen Rose, and some of the best young talents from the 2013 NBA draft class.

Alex Len might be the biggest enigma (literally) in the 2013 draft. Standing 7-foot-1, with nearly a 7-foot-4 wingspan, the Ukrainian center could be the best player of this class in five years. Len has an intriguing combination of size, skill, and athleticism. Though he will likely never be confused with Joakim Noah, Len is no stiff. He moves well on both ends of the floor and has shown the ability to catch and finish at the rim out of pick-and-rolls, an important skill at the NBA level.

Len’s offensive game, outside pick-and-roll finishing, has major questions. He has limited range and struggled to score consistently in the post. According to Synergy Sports, Len ranked in the middle of the pack (the 55th percentile, to be exact) when it came to producing points on the block against single coverage. That’s a worrisome sign.

Looking at it subjectively, it’s not hard to see why Len had issues in the post. Though blessed with good height and length, the 19-year-old center has trouble anchoring on his post catches. He also lacks a refined plan to score. The latter isn’t uncommon among players so young and can easily be taught, but the former is a bit more concerning. Len’s challenge in this area, and in general, will be trying to add strength without adding weight that could hamper his overall athleticism.

Getting a good read on Len isn’t easy. Each of his two seasons at Maryland were marred by extenuating circumstances. In his freshman year, Len missed nearly the entire non-conference season due to questions about his eligibility, and posted pedestrian numbers in the final 22 games. He was much improved this past season, but was hampered late by ankle pain that would later be diagnosed as a stress fracture, the same injury that has kept him from working out for teams before the draft. The question now facing talent evaluators is how much, if at all, this affects Len’s ceiling.