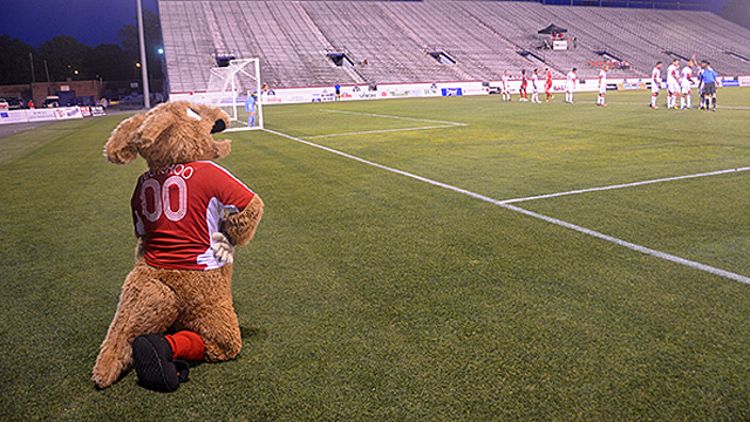 An army appears to be advancing on Dr. Babik’s bouncy castle …

The U.S. Open Cup third-round game between the Richmond Kickers and D.C. United has gone to penalties, and I’ve wandered down from the press box to hover with my camera behind one of the goals. Above me, a scoreboard glowers news of the stalemate beside a rickety looking telephone pole straight from Kinshasa, while on the far side of the field a packed home section of fans are being encouraged by a large kangaroo mascot to cheer the Kickers on.

Kickeroo has a sly sense of humor. Earlier, when the match officials had emerged from beneath the giant, empty 10,000-seat stand on the far side of the field that houses the locker rooms, the Richmond mascot had jazz-handed their blushing entrance onto the scene as though the world was watching. But now, even Kickeroo is caught up in the possibility that a reeling D.C. United team, which has capped 120 minutes of unremarkable scoreless soccer with two red cards in the second period of extra time, might be on their way out of the Cup. His fake-furred hands are vigorously waving the crowd on despite the humid heat evening, while in the background, a small but vocal D.C. United support hastily relocates to the other end of the stadium where the penalty shootout is taking place.

I catch sight of the bouncy castle (provided by local dentist and team sponsor Dr. Babik) up in the far right of the City Stadium grounds. The scene is one straight out of Monty Python and the Holy Grail — with the castle about to be taken forcibly by a small army of “Barra Bravas” and “Screaming Eagles” defiantly crashing past the “No alcohol beyond this point” sign.

A few feet away from me, D.C. United goalkeeper Joe Willis and Richmond keeper (and D.C. United loanee) Andrew Dykstra watch the crowd indifferently as they wait to take their turns in the shootout. The previous evening, I’d spoken at length with Dykstra about just such a scenario. Richmond, the USL Pro side, is D.C. United’s official affiliate club. Its coach, Leigh Cowlishaw, spent three weeks with D.C. in the preseason, and the MLS side regularly sends players to Richmond on loan. Dykstra and the others are regularly watched by D.C. assistant coach Preston Burpo. I’d joked to Dykstra about “Preston telling you to throw one in” when the sides played each other tonight. “Ha! No, no, no,” said the keeper. “He’s been pretty good.”

Entering the game, the Kickers were the last undefeated team in North American professional soccer, having started their season strongly with Dykstra a mainstay in goal. D.C., on the other hand, hoped to build on last season’s MLS success, which peaked when they beat rivals New York in a memorable snow-ravaged playoff series, only exiting when their injury-ravaged squad hit a visible wall in the Eastern Conference finals against Houston. Instead of progressing, though, the side has struggled alarmingly this season. They arrived in Richmond in the middle of a long winless streak. Coach Ben Olsen has been characteristically expressive in trying to rally his team — defending them, cajoling them, and at one point in recent weeks, after a chastening 4-0 home loss to Houston, openly calling out their lack of passion: “I still don’t get how it takes a coach to throw things and yell at [players] to now play with aggression and with the right spirit for 20 minutes of that second half. It’s mind-boggling to me. I don’t get it.”

Looking at the benches, the two coaches are studies in contrast. Olsen can be disarmingly funny, but also has a coiled, slightly lupine quality — you can see how he was once a combative midfielder. Cowlishaw is tall and conspicuously, perhaps studiedly, laid-back during games. While Olsen sometimes crouches on the backrest of the bench, Cowlishaw reclines, arms and legs folded neatly, as he studies the game. He’s certainly at home here, having been with the club since the early ’90s, after a chance offer from the University of Richmond changed his life. “I’m from Burton-on-Trent, bang in the [English] Midlands. I signed with Everton as an apprentice for a couple of years. Everton was, at the time, probably the best team in the country, if not Europe; Gary Lineker, Adrian Heath were all playing at the time. Unfortunately I didn’t quite make the trade, so I went back and played for Burton Albion for a year, and then I got an offer to come over to the University of Richmond on a scholarship. … At the time there was an English coach, who’s actually the head coach at Coastal Carolina now, named Sean Docking. He had some contacts with the PFA and was always looking for players released from professional clubs with the educational background to be admitted into university. He sent me this report that talked about over 5,000 people being there [University of Richmond], so I thought that was kind of a good sign. Obviously there weren’t 5,000 people there every time we played.”

Cowlishaw eventually found himself playing with the local Kickers and actually winning a U.S. Open Cup with them in the pre-MLS days, though he never got a chance to prove himself as a player in the new league. “I really wanted to have the MLS shot — I felt that I could have made that, no question. Unfortunately, at the time I think they had the “three foreigners” rule, and they were bringing in high-profile foreigners, so I didn’t really have much chance of making it in the early years of MLS, as it was so restrictive. So I stayed with Richmond and started to work, established the camp program, got involved more on the youth programming side, and we kind of built the club up backward.”

Under Cowlishaw, and a dedicated front office, the team has built up youth programs, day cares, recreational programs and the like that currently involve about 8,000 young people. Clusters of youth teammates are duly dotted throughout the crowd tonight to watch the senior team play. As director of sales Hunter Leemon will tell me (in between organizing halftime bouts of “sumo soccer” and arranging rides back to hotels for feckless intrepid reporters with an optimistic belief in public transport), “Richmond had a reputation as a participatory town, but not really a spectator town, but we’re changing that, gradually.”

Richmond has also had a reputation as perennial Open Cup challengers — regularly embarrassing MLS sides in recent years. Now, as Willis steps forward to face the first Richmond penalty shot, while his remaining eight teammates hover by the halfway line, it looks like there could be another MLS scalp on its way.

It’s not a good start for Richmond, though. The first penalty kick is indecisive and Willis scrambles to his left to block it. Just over to my left, Dykstra gives a little pound of the turf in frustration as he watches. It’s a strange atmosphere from this vantage point. There was an audible groan from the far side of the field when the save was made, but where we are — with just the keepers, a couple of photographers, and a few ball kids enacting their own drama beneath the scoreboard, and of course the big expanse of the empty main stand to my left — the sound could be related to a distant battle rather than the exchange in front of me. It gives a strangely dissonant, underwater feel to events.

As Dykstra jogs forward to face his first penalty shot, another noise is added to the mix. The curve of the stadium means that the D.C. supporters vanguard has now settled nearest us, and a small pocket of them are chanting “D.C. reject!” at their erstwhile keeper. As trash-talk chants go, it may not be the most venomous (or the most accurate), but there’s something awkwardly intimate about the way the handful of voices float across to the goal where we’re standing. Dykstra doesn’t react, though he must clearly hear it — focusing instead on the penalty taker in front of him. Willis, though, waiting at the edge of the box, gives a sharp glance of irritation before going back to his own concentration routines to the side of the box.

The penalty is scored.

In fact all D.C.’s penalties are scored, as Richmond misses its next one and never recovers. As James Riley scores the winning kick, the D.C. fans light red flares and gleefully celebrate a victory that had looked unlikely just moments earlier. Cowlishaw gives Olsen a warm handshake, ruefully tells me he’s surprised at the penalty errors “because we’d practiced those a lot,” and moves to rally his players for Friday night’s league game. Feeling a little like a turncoat, I drift off to the side of the field where the D.C. players I’ll now be following are headed for the lockers. As against Icon FC the week before, the floodlights are switched off abruptly and they complete their walk in darkness. In the gloom Olsen makes a fatalistic wisecrack to a handful of reporters about finally scoring some goals, and welcoming “baby steps,” before unobtrusively pulling one of the journalists out of the way of United’s enthusiastically reversing team bus. They have their own league to get back to. Good night Richmond.