Johnny Watch: A Preseason Browns Game for the Birds 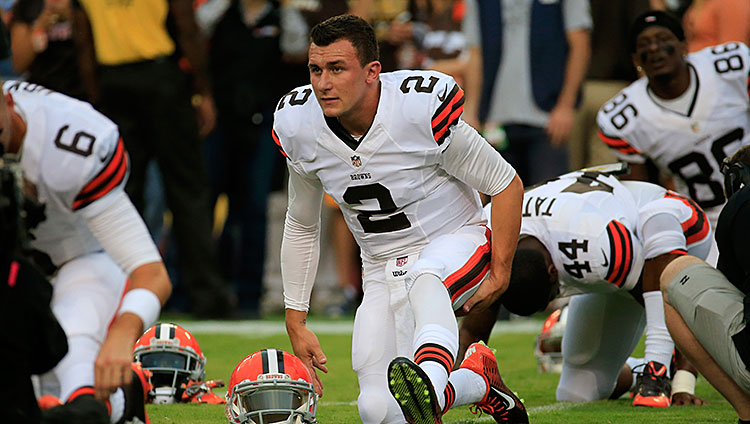 There is but one, truly serious philosophical problem, and that is the Cleveland Browns’ quarterback competition. Do you throw Johnny Manziel to the wolves in Week 1, on account of his superior talent, even though he’d probably benefit from a month or so of clipboard carrying? Do you delay the inevitable and start Brian Hoyer out of the gate, stripping your 21-year-old wunderkind of valuable playing time? These are important questions to consider, especially when your next best option happens to be Rex Grossman.

Of course, when dealing with positional battles between two legitimate combatants, the situation usually takes care of itself. One guy outperforms the other in the preseason and consequently receives the starting gig; this is as uncomplicated as it is uncontroversial. So, if we learned anything from the Browns’ 24-23 loss to the Redskins last night, it’s that neither Manziel nor Hoyer seems particularly worthy of the QB1 crown right now. Indeed, the old football adage is proving to be all too true: If you have two starting quarterbacks, you don’t have one.

The raw numbers back this up: Manziel went 7-for-16 for 65 yards and was sacked three times; Hoyer went 2-for-6 for a measly 16 yards and shot innumerable passive-aggressive glances at Manziel from the sideline. Admittedly, both quarterbacks were struck with a butterfingered receiving corps, but the pair also profited from a multitude of cheap defensive holding penalties, which rendered the most hyped preseason matchup I can ever remember nearly unwatchable.

I say “nearly” because committed viewers were ultimately rewarded with a peak Manziel moment — Johnny Football flipping the bird to the Washington sideline — which more or less negated the awful football that preceded it.

Hilariously, Manziel’s agent, Erik Burkhardt, tried to argue that his client was merely “hand-signaling the next play call,” but this explanation was quickly disproven by Manziel himself, who admitted to a “lapse of judgment” in his postgame press conference. Even funnier was Manziel’s reaction upon hearing the news that his gesture was televised.

Joe Haden was reportedly “amazed” by the sheer amount of profanities directed Manziel’s way during the game, making the already innocuous incident even more understandable. Still, it’ll do Manziel no favors in the quarterback competition, where every “lapse of judgment” is another reason to roll with the relatively experienced Hoyer in Week 1. This is probably for the best anyway. I mean, did you watch Manziel’s interview with Jon Gruden?

He can barely call out a play, let alone worry about suppressing his desire to flip off the opposing team, and he probably shouldn’t start until he masters both of these things. Baby steps.

"I say to fans, don't worry, because I won't do that anymore," Suarez said. "I spoke to my psychologist, and he said I had to face it and say sorry. I did -- now I would rather focus on the present, which is Barcelona.