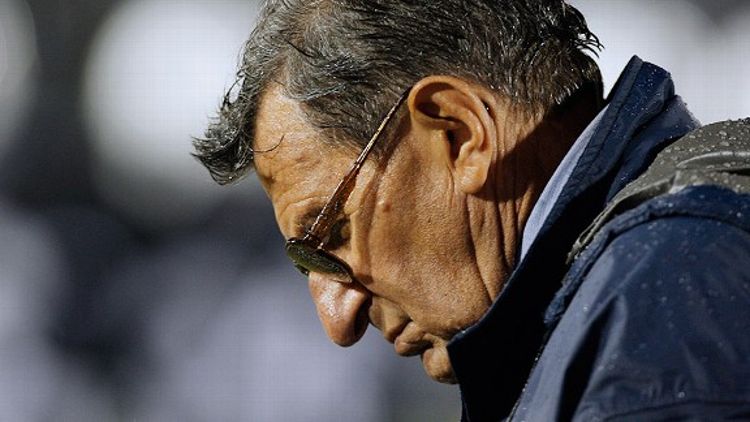 Embattled Penn State coach Joe Paterno, whose tenure was marred by a sexual abuse scandal involving former assistant Jerry Sandusky, said in a statement Wednesday that he will retire at the end of this season.

Penn State’s Board of Trustees is still expected to meet later this week, and it could decide on a different course of action.

You can find Paterno’s statement here. Grantland’s Michael Weinreb, who grew up in State College, wrote on the allegations earlier this week. He appeared on SportsCenter on Tuesday to discuss the story.

From Growing Up Penn State:

I remember one Saturday morning in the autumn of my adolescence, the coach shambling along in his parka, brow furrowed, glasses shadowed in the sharp glare of the sun, black sneakers kicking at the leaves as they eddied and then parted on the asphalt path before him. I did not intend to follow him; it just happened that way, so that one moment I was headed to a football tailgate and the next moment I was trailing along behind Joe Paterno.

I walked behind him for several miles that day. Back then, in the late 1980s, it was still a routine of his to walk from his house to the stadium where he coached, slipping across the Penn State campus, past science labs and classroom buildings and parking lots occupied by stunned tailgaters who could never quite get over the fact that it was really him. Sometimes we were guilty of regarding him as more deity than man, as if he presided over us in mythological stand-up form. He was as much our own conscience as he was a football coach, and we made that pact and imbued him with that sort of power because we believed he would wield it more responsibly than any of us ever could. Maybe that was naïve, but we came of age in a place known as Happy Valley and naïveté was part of the package, and now that word isn’t in our dictionaries anymore.