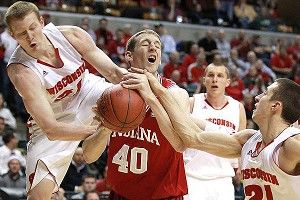 OH MY GOD, BROS OF MADISON. Speed. It. Up. Look, I get it. That’s your thing. But I am not the only person in the world who is frustrated with the Wisconsin Badgers.

This, from Shane Ryan’s appropriately headlined blog post: Wisconsin: The Most Boring Team in America:

The 4-seed Buzzcuts are scheduled to face 13-seed Montana at 2:10 p.m. Eastern on Thursday. Feel free to watch it. Or watch this video of someone digging a ditch. It might be more exciting.