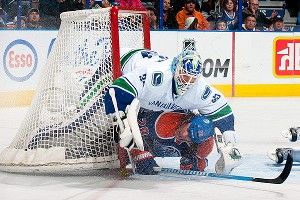 Earlier this week, Toronto Maple Leafs GM Brian Burke was adamant that he was not in the market for someone to supplement and/or replace Jonas Gustavsson and James Reimer in net. “We are not looking for a goaltender at this point,” he said in an e-mail to The Globe and Mail.

That was before Gustavsson turned in a clunker of a performance Tuesday night. The Leafs, who are on the playoff bubble, lost to the New Jersey Devils 4-3 in overtime as Gustavsson was weak on the five-hole in regulation and unfortunate with his positioning on the overtime goal, which was headed wide but caromed off his equipment and into the net to erase what had been a late comeback by Toronto.

On Wednesday, Burke changed his tune on TSN Radio. “It’s very hard to watch what happened and not wonder if we have enough [in net],” he said, before deploying the tried-and-true double negative: “I’m not sure that we’re not going to be in the market [for a goalie] before we’re done,” he said. “The fact is we’re losing games because we’re not stopping the puck enough.”

It’s a tough time for goalies in Toronto, though I did enjoy the way this Toronto Sun headline sought to put a positive spin on whether Burke’s words might affect his netminders’ performance going forward: “Goalies already felt lowly.”

With Toronto one of the teams that might be in the market at the deadline for a goalie, who would potentially be available? Here’s a look at some of the names that have been floated as being goalies in play (not just for Toronto, but to other teams who may be seeking help in net) leading up to Monday’s trade deadline:

Cory Schneider: Probably the backup goaltender most commonly thought to be ready for a no. 1 job (especially by a particular overreacting subset of Vancouver Canucks fans themselves). Schneider has a .922 career save percentage (.928 this season, close to the .929 he posted last year) and has a 13-5-0 record this season, but it’s unlikely the Canucks, who operate under the assumption that they’ll go deep into the playoffs, would let go of such an important part of their deep roster. Schneider becomes an unrestricted free agent after this season, however, and will likely be a highly sought-after player at that point.

Jonathan Bernier: The Los Angeles Kings’ backup goaltender has been floated as a trade chip for months now, though The New York Times’ Jeff Klein has concerns about whether his numbers really hold up to his esteem. The Kings already made a deal with the Columbus Blue Jackets (a team known to be looking for some solutions in net) that did not include Bernier, though the team continues to be active in the market.

Ben Bishop: The St. Louis Blues love their hometown prospect, but on a squad that operates under a 1a-1b goaltending system there isn’t a huge amount of room for Bishop to crack through right now. Barring some kind of freak accident that sidelines both Brian Elliott and Jaroslav Halak, Bishop will become an unrestricted free agent after this season. (He’d have to appear in 17 games otherwise.)

Josh Harding: The Minnesota Wild goalie becomes a UFA after this season as well. He had a big run for the Wild earlier this season when the team was leading their division, though his record now stands at 9-9-3. When he “tweaked something” in practice this week and minor leaguer Matt Hackett was called up, it set off rumors that he was about to be dealt. But the Wild remain in the playoff hunt, so it’s hard to know whether they want to upset the balance at this point.

Anders Lindback: When the Nashville Predators signed Pekka Rinne to a seven-year, $49 million contract last year, it was the kind of long-term move that isn’t exactly catnip to a backup goaltender. Still, Nashville is using this season to make a big postseason push, and like Vancouver, it probably feels it would be better to wait until after the playoffs to make any deals, and the 23-year-old wouldn’t come cheap.

Evgeni Nabokov: Another pending free agent rental, the New York Islanders’ Evgeni Nabokov has amassed a .925 save percentage this season and has gone 14-14-0 on a young and defensively-suspect Islanders team. Nabokov has a no-trade clause, but he could certainly waive it if he were intrigued by joining a contender. On the other hand, there have been reports that the Islanders are hoping to sign him to an extension.

Ryan Miller: I’d be shocked if the Buffalo Sabres traded their franchise goaltender, despite the rough season he and the team have had. But I’m holding out hope that he becomes part of one of those truly zany blockbuster trade deadline maneuvers that go down in hockey lore. NASH FOR MILLER STRAIGHT UP GET ER DONE.

A few other notes from in net: