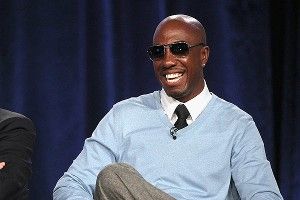 As I sat on a plane to Orlando, having successfully drooled all over my Club Tril T-shirt, the realization that I was en route to NBA All-Star weekend finally slapped me in the face.

In the past, I’ve handled events as exciting, unpredictable, and slightly dangerous as this by going with the flow, not overthinking anything, never making plans, and, most importantly, always saying yes. But something about this weekend led to a change of heart. I thought that with just a few hours of planning, arts and crafts, phone calls, rush-order eBay purchases, and carefully crafted chants and heckles, I could really leave a mark on this All-Star weekend. Also, after embarrassing myself as the only press member at the Knicks game who tried to catch a shirt from the T-shirt cannon, I fully understood that it could easily be my last. There’s no time to hold back.

There are a handful of official All-Star events planned for this weekend. I plan on attending each of them, and will come prepared.

The game features two teams, coached by Dwight Howard and Kevin Durant. I like these choices, not only because it’s very apparent they both want to be celebrities beyond basketball, but also because they are easily the two front-runners for the lead role in Space Jam 2. Anyway, it’s not about them.

This game is about two people: comedian JB Smoove and ’90s folk hero Penny Hardaway. It is unclear whether or not they are on the same team, but I assume the powers that be have split them up to keep the game fair. As an actor on Curb Your Enthusiasm, JB’s Leon became one of the most quotable characters in recent memory. To honor him, whenever he does anything (makes a shot, falls down, stands up off the bench, etc.) I plan on screaming one of his quotes. Essentially, I’m going to be a real-life Leon soundboard. Some examples:

Leon gets in the game = I scream: “I GETS MINE.”
Leon forces a turnover = I scream: “I BRINGS THE RUCKUS.”
Leon shoots an air ball = I shout (through the megaphone I snuck in): “EJAKALATE.”
Leon makes a 3-pointer = I yell: “BLACK MAN DOIN’ HIS THING BABY, BARACK OBAMA.”

Note that these are just some examples.

As for Penny, every time he shoots the ball, I’m breaking out my Lil Penny and holding it up like Simba on Pride Rock.

In easily the most lopsided game in competitive history, the Shaq-led #TeamShaq, composed of Blake Griffin, Jeremy Lin, Ricky Rubio, Landry Fields, and Kemba Walker, go up against Charles Barkley’s squad of once-college, now-NBA players. I have a prediction that this game will feature more exciting dunks and alley-oops than the actual dunk contest.

As for my preparation for this Globetrotters-Generals matchup, it’s pretty simple. Before the contest, I’m going to distract Evan Turner with something shiny, take his jersey, and probably get some decent playing time once #TeamChuck is down by 45 at half. Once in the game, my only goal is to get posterized by Griffin and to make sure Rubio, Lin, and I become BFFs.

This competition is probably my only opportunity to cheer on my city, and I plan on taking full advantage of that. The Shooting Stars event, which pits four cities/regions against each other, will showcase Team Atlanta, Team Orlando, Team New York, and Team Texas this year. Each city is represented by an NBA player, WNBA player, and former NBA player.

Simply wearing a Hawks jersey and bribing the sound guy to play “What You Know” by T.I. on loop isn’t enough. For me to truly help Team Atlanta (Jerry Stackhouse, Lindsey Harding, and Steve Smith) repeat as champions, they need to look over and see a guy representing Atlanta more intensely than anyone has.

The idea: Switch out the Hawks jersey for a Falcons Vick jersey and bribe the sound guy to play “What You Know” by T.I. on loop.

And like that, Jerry Stackhouse finally becomes a champion.

Put my hat over my face and take a nap while this is looping out of the boombox that I snuck in with my megaphone.

This year, this contest means nothing to me, because it’s missing the most important 3-point shooter of 2012.

I guess the NBA didn’t get the memo, but Steve Novak is the movement and nothing else matters. I plan on holding a vigil in my seat in his honor by putting a white glove over my right fist and raising it in the air for the duration of the contest. It ain’t right, Steve. You deserved this. I’ll be Discount Novachecking in your honor all weekend.

I hope I’m wrong about this, but following Blake Griffin’s Kia Leap with Derrick Williams, Paul George, Jeremy Evans, and Chase Budinger is like topping off the most amazing workout ever with a pack of Newports.

Having said that, I plan on having the time of my life and overreacting to everything, a la Jordan and Ewing in ’86.

The a capella group Pentatonix, from The Sing Off, is performing and some people are happy about this. I am not one of those people, because in the final round of the show, they knocked out the group from my alma mater, The Dartmouth Aires. I don’t care how quiet it is while they are performing, I will be putting on a side performance in my seat, a mash-up of the Dartmouth “Alma Mater” with this classic from everyone’s favorite crooner, Eamon. I’ll see you in these Orlando streets, Pentatonix. Assemble your crew.

Will be streaming the Oscars in my seat.