Is Pace the Key to Oklahoma City’s Success and Failure? 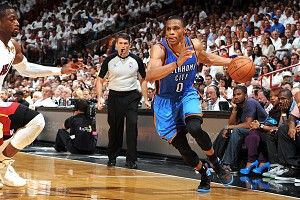 Kendrick Perkins probably said it best, even if he didn’t really mean to. Following Tuesday night’s Game 4 loss, the Thunder center posed a similar question to the one I was asking after OKC’s 33-point first quarter:

I just don’t understand why we start out the first quarter the way we did, with the lineup that we had, and all of a sudden we change and adjust to what they had going on.

In the first three clashes of these Finals, one of the Thunder’s major issues was in the way they started. Miami jumped out to a lead in each game, and it was on OKC to climb its way out of a hole. That’s what made the first quarter of Game 4 so encouraging. From the opening tip, the Thunder were playing at a pace beyond what Miami was comfortable with. After each defensive rebound, Russell Westbrook pushed the ball down the floor looking to attack, and the result was a collection of easy baskets and a 17-point lead.

The Thunder seemed to be playing at a faster clip than they had all Finals, and the reality is, they were. “Pace” is the measure of possessions a team would get per 48 minutes. For the playoffs, the Thunder have had a pace factor of 92.74. That figure is down from the 95.68 OKC put up in the regular season, but the cliché that games slow down in the playoffs is a cliché for a reason. In the regular season, more than one-third of NBA teams played at a pace of 94 or above. In the playoffs, only the Spurs and Jazz hit that mark.

The larger dip is during the Finals, where OKC is down to 90.53. Much of that decrease, as might expected, can be chalked up to how the Thunder have started games. In the first quarter of Games 1-3, they were all the way down to 86, four fewer than the lowest figure in the league during the regular reason.

During that 33-point first quarter, when OKC looked better than it had all series, that pace factor jumped to 98.16. For 12 minutes, they seemed to find a perfect balance of aggression and control. If there wasn’t a fast-break hoop to be had, OKC was still getting into a secondary break and attacking before Miami had a chance to fully settle into its half-court defense. Because pace is calculated on a per-48-minutes scale, the difference in the actual number of possessions seems small. The Thunder only got two more possessions in Tuesday night’s first quarter than they averaged in Games 1-3, but considered over an entire game, that’s eight more trips down the floor. For reference, the difference between the teams ranked first and 30th in pace during the regular season was 6.7 possessions per 48 minutes.

As a convicted Russell Westbrook hater, my problem was less about the amount of shots Russ took than the type of shots. Those pull-up jumpers are less of a problem when they come isolated on a sagging LeBron James in the secondary break than from 20 feet after pounding away the shot clock. Westbrook was exactly who he is during that first quarter — getting to the rim when he wanted, taking the shot when it was there, and making one or two out-of-control plays that are easier to live with if he’s consistently attacking.

Following that first quarter, OKC decided to do the only thing that makes sense after jumping out to a big lead, which is apparently to completely change how you’ve played all game. The pace in the second quarter fell to 82.40, their slowest quarter of the series. As with any stat, there are plenty of contributing factors to the change. Getting out in transition is much easier when Mario Chalmers is clanking jumpers than when LeBron James is passing to wide-open shooters out of double-teams. Either way, it wasn’t long before 17 was seven, before seven was two, and before Miami eventually had the lead.

It was in the fourth quarter (pace, 97.68) that OKC, and especially Westbrook, got back to the style that had given it the lead in the first place. Again, Westbrook spent much of the quarter attacking, and again, there were buckets to be had for the Thunder. In the end, it just wasn’t enough. (It should be noted that because of late-game fouling, pace naturally rises in the fourth quarter. Still, OKC has only hovered around 91.5 in the last 12 minutes during these playoffs.)

Saying the Thunder’s half-court offense isn’t sophisticated is putting it kindly. For much of its scoring, OKC relies on its players being more talented than the guys on the other side, and most of the time, that works just fine. In this series, against a team with excellent defensive speed in the half-court, those points have been harder to come by. That’s what made so much sense about last night’s first quarter. By pushing the ball, the Thunder prevented Miami from digging in on defense. If the Thunder have a chance in this series (and at this point, they might not), it will be because they maintain a pace that the Heat just can’t match.