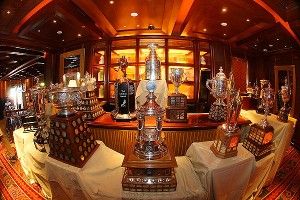 There comes a time each year when the best and worst of the NHL is on display, from its quirky personalities to its self-aware mockery to its godawful taste in music. And tonight is that night: Get excited for the NHL Awards, live from Las Vegas! (The players certainly are: Earlier this week, Henrik Lundqvist “hosted” a party at one nightclub that featured both incredibly phallic glow sticks and Paul Bissonnette dancing on a raised platform, and I spotted several other NHLers still going strong in the Wynn casino when I finally went to bed at 3 a.m., hundreds of dollars poorer and having been utterly humiliated by my dice-throwing skills.)

It’s hard to accurately sum up such a simultaneously glorious and painful event as the NHL Awards, though in the coming days I will most certainly try, but I think this actual paragraph from an official league press release nicely encapsulates the absurdity:

Diane Kruger (“Inglourious Basterds,” “Farewell, My Queen”) attending the Awards with Joshua Jackson, and the Flyers’ Claude Giroux, who, along with [Pekka] Rinne, is a finalist in the EA SPORTS NHL® 13 Cover Vote, are also expected to walk the red carpet.

LOL, WHAT? I seriously could not love the NHL more.

In order to entice you to watch the damn thing, here’s a drinking game to enhance your viewing experience. Feel free to suggest additional categories in the comments!