Iowa–Iowa State and the Toxic Swamp of the Big Ten 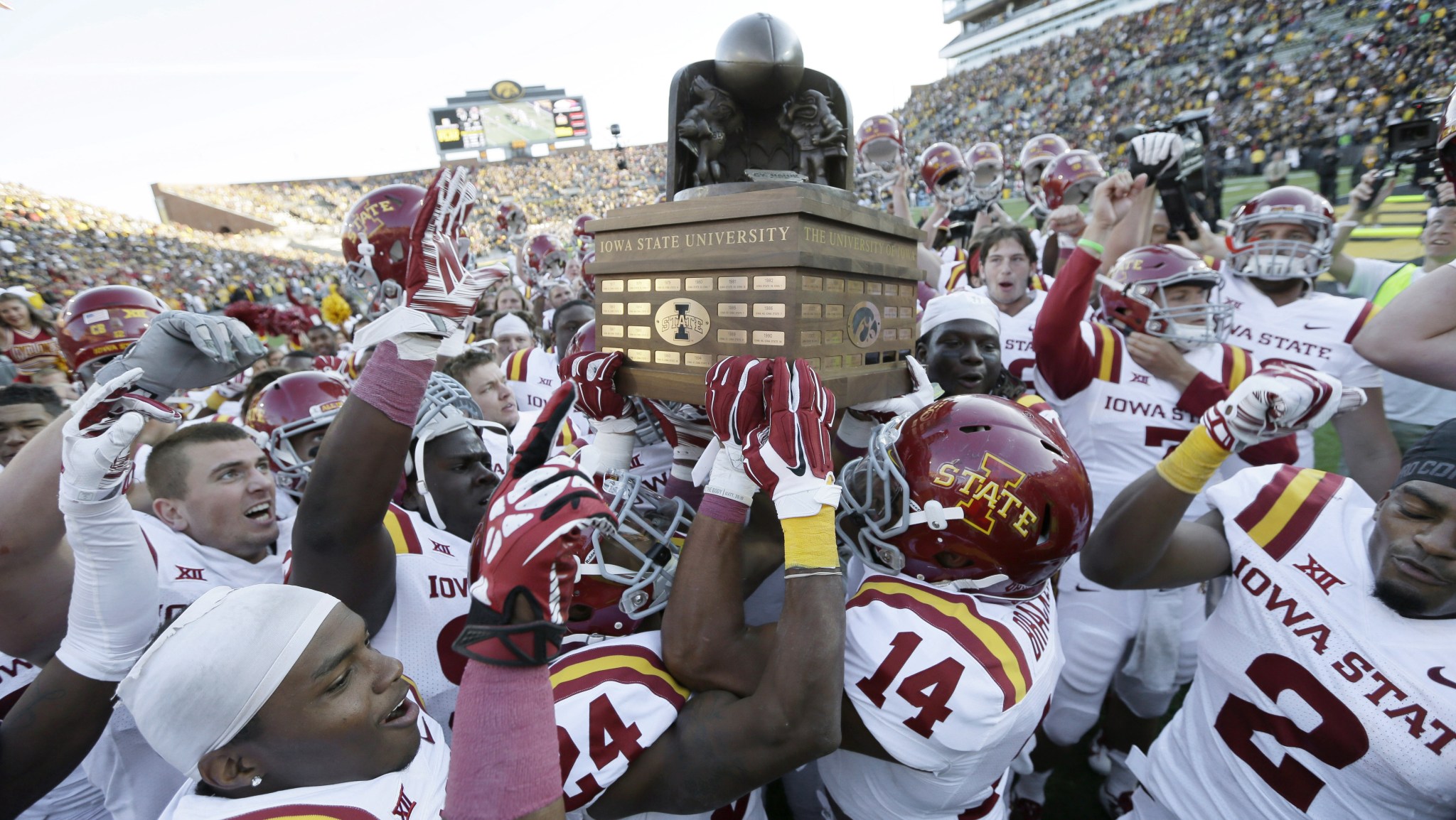 There are few things in sports I dislike as deeply as overcoaching. (Using penalty shots to settle soccer games and Field of Dreams are the others.) Overcoaching comes in many forms, from what my pal Bob Ryan calls “creeping LaRussaism” in baseball, to almost all of modern college basketball, to what I saw in Iowa City on Saturday from Iowa coach Kirk Ferentz. Conversely, there is nothing I like more than seeing an episode of overcoaching sink said coach down into the dark and shameful depths of the Great Lake of Fail. Which is what I saw happen in Iowa City on Saturday to Iowa coach Kirk Ferentz. This sent me smiling all the way back down between the cornfields on I-80 to Des Moines.

Anyway, there were seven seconds left, and the game between Ferentz’s Hawkeyes and Iowa State was tied at 17. It should not have been tied at 17; Iowa dominated the first half, pushing the Cyclones all over the field and going into the locker room with a 14-3 lead, which was helped immeasurably when Iowa State’s DeVondrick Nealy fumbled the ball at the Iowa 1-yard line shortly before the break. But in the second half, Iowa State turned the game around, especially at the line of scrimmage, and Cyclones quarterback Sam Richardson really caught a beam, completing 15 of his first 17 passes. Iowa State finally took a 17-14 lead when Richardson hit Nealy with a lovely pass down the right sideline between two defenders, only to have Iowa tie it with a field goal.

That left Iowa State with one last drive, studded with some penalties, some big plays by Richardson, and some officiating that taxed the definition of the word quizzical. The drive ended with Iowa State kicker Cole Netten lining up a 42-yard field goal. This was when Ferentz decided to access the higher centers of his coaching brain. He decided to “ice” Netten. He called a timeout that everybody noticed only at the moment Netten’s kick sailed just wide of the left upright. Ferentz got his timeout. Netten got another chance at never having to buy his own beer in Ames for the rest of his natural life. He put this one straight down the middle, and I felt as glorified and justified in the spirit as I would had my own suggested alternate ending to Field of Dreams — which involves a tornado, a cholera outbreak, and Amy Madigan ditching her crazy-ass husband to follow Judas Priest — actually been filmed right in front of me, right there in Iowa.

Later, Ferentz said the decision to “ice” Netten was “a 50-50 call.” The bar stools at the Old Coaches Café are full of men who made 50-50 calls. “I heard the timeout before the ball was even snapped,” Netten said. “It was no surprise to me. It doesn’t work. If anything, it works better not to ice because kickers expect it to happen, and you have to focus either way, timeouts or not.” In fact, the only real problem Netten had in remaining calm as the game wound down was having so many people coming up to him and telling him to calm down.

“Everybody’s coming up to me and saying, ‘You can do this. You can do this.’ And I’m like, yeah, I know I can. A field goal’s a field goal,” he said. “Usually kickers like to be left alone, to, like, get in your own zone. Do you know anyone who can calm down when people are telling them to calm down?” He had a point.

It was a good win for the Cyclones, who started the season with a bad loss to FCS power North Dakota State, and who improved the following week against Kansas State but lost anyway. And it dropped Iowa to 2-1, and the loss contributed to a second debacle of a weekend for the Big Ten, which apparently has decided to greet the first season in which there is a college playoff of sorts by turning into a sprawling Superfund site. Last weekend, Iowa barely got by Ball State, Illinois went life-and-death with Western Kentucky, and Nebraska needed a touchdown with less than a minute left in the game to beat McNeese State at home. Meanwhile, Northwestern lost to Northern Illinois and Purdue got buried by Central Michigan. The two traditional powers also got lit up: Ohio State lost by two touchdowns to Virginia Tech, and Michigan got shut out by Notre Dame in gruesome fashion, 31-0.

Then, this past Saturday, Maryland lost to West Virginia and Indiana lost to Bowling Green. Illinois and Purdue were crushed by Washington and Notre Dame, respectively, and Minnesota was routed by TCU. These were tougher than last week’s games, but the final tally didn’t look any better for the league. If this keeps up for another week, some Big Ten programs are going to be buried deep under 50 feet of concrete out at Yucca Flats. Seriously, it’s one thing to let your unbridled greed result in a grotesquely overstuffed conference, but, having done so, it’s pretty humiliating to end up every Saturday afternoon looking like Monty Python’s Mr. Creosote.

The two teams have been playing each other since 1894, although there was a 42-year break in the rivalry from 1935 to 1976, and the series got started again only after some secret negotiations involving the two universities, the Iowa state legislature, and an independent arbitrator hired to make sure the two schools didn’t renege on each other. Every year, Iowa and Iowa State play for something called the Cy-Hawk Trophy, a big football-shaped andiron atop a squarish wooden base. Three years ago, they redesigned the trophy because the Iowa Corn Growers Association had become the sponsor for the series. The new trophy had a lot of corn on it, along with a nice little farm family. They unveiled it at the state fair that fall and people did everything but throw corn dogs at it. This likely was the first time in Iowa history that a statewide controversy exploded over something having too much to do with corn.

One of the other things about the Cy-Hawk Trophy is that it’s not awarded to the winning team. The winning team has to go and get it — so, a few seconds after Cole Netten’s second try went through the uprights, the Cyclones embarked on a general mobilization across the field, looking for their prize. In the lead was Tom Farniok, a huge offensive lineman from South Dakota with shoulder-length hair and what appears to be a rough draft for the Sistine Chapel’s ceiling inked on his right shoulder. “I was looking for it,” he said. “Right before the kick, I spotted it over on the other side.”

Farniok is a redshirt senior, his career at Iowa State chopped up by injuries. He missed this game last year with a knee injury. This season, he strained a knee ligament in the first game against North Dakota State and now wears a brace that makes him appear to be playing with one foot in a golf bag. It was Farniok at center that was the mainspring for the Iowa State offense that came alive in the second half, enabling Richardson to do all sorts of things he couldn’t do in the first.

“We fumbled at the goal line, and we thought, Dang, we can play with these guys,” Farniok said. “There was never really any doubt. That was awesome, that feeling. I mean, last year, I couldn’t play, but now I can say that I’m 3-0 when I put the pads on against Iowa. It’s what you play football for, just watching yourself beat down an opponent.”

In fact, Farniok was one of the people pestering Netten as it became clear the latter was going to have to decide the game, one way or another. “After he missed it, he was smiling and laughing and I knew, Hey, he’s going to make the next one,” Farniok said.

Leave the man alone. He’s Al Shepard on the launchpad. He’s cooler than you are, so fix your little problem and light that candle. Farniok got to carry the Cy-Hawk Trophy up the tunnel and into the locker room, and then they all got to put it on the bus and take it home to Ames, as evening came on and the sky went parfait over the rolling hills. It may not be heaven, but it’s damned sure Iowa, and the day can end very sweetly as the seasons change.