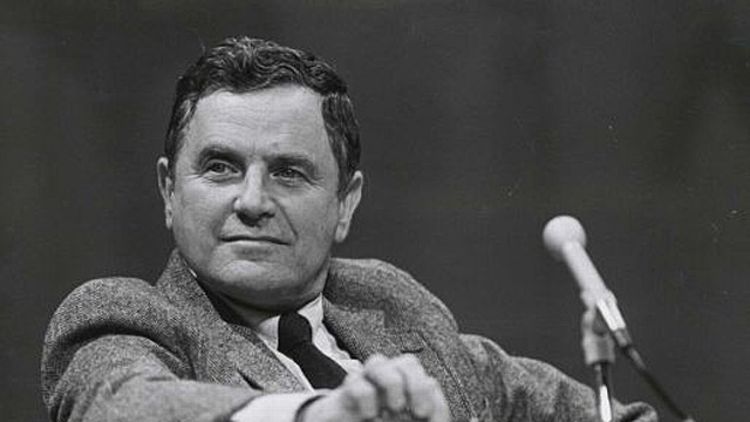 Stan Isaacs, a compact little sportswriter with an impish grin, once decided he’d heard too many press conferences. The reporters’ questions were moronic, the athletes’ answers nearly as bad. So Isaacs sat down and started imagining. This is what Isaacs did. It’s what made him a strange rebel of the sports page. Isaacs finally decided to have David — the biblical David — endure a post-gamer with the reporters:

David: Thank you. But I’d like to point out that I couldn’t have done it without the help of all the Israelites. It was a team victory.

Scribe: When did you first think you had it won?

David: When I had Goliath down on the ground, pulled sword out of its sheath and cut off his head.

Scribe: What went on in your mind when you were doing it?

David: When the Philistine arose and drew near to me, I figured the best defense was a good offense. So I ran to meet him. The old element of surprise you know.

That was Stan Isaacs, the Newsday columnist, who died Tuesday at 83. Isaacs was a fierce opponent of whatever he was “supposed” to be writing, an insurrectionist with a smile. In the end, he did to conventional sportswriting what David did to the giant.

Isaacs was born in Brooklyn in 1929, when the borough was already haunted by Howard Cosell, Marty Glickman, and Roger Kahn. It would be important later that young Isaacs was a Giants — not a Yankees — fan. At first, Isaacs had trouble finding a paper that would stay open. He worked at the New York Star, then The Daily Compass, a liberal paper that put him the same newsroom as I.F. Stone. The Compass didn’t have enough sportswriters to make for a respectable-looking page, so Isaacs filed both under his own name and the byline “Gary Fiske.” When City College of New York won 1950 NCAA and NIT titles, the Garden sent “Fiske” an inscribed cigarette lighter.

It was at Newsday, which he joined in 1954, that Isaacs found his voice. History was conspiring to help him. For one thing, whites were fleeing Manhattan for Long Island, which transformed Newsday into a fat paper bursting with ads. Second, Isaacs’s suburban perch allowed him to sidestep the tough competition in the city. He could write what he liked (Newsday was an afternoon paper) and groove to his own beat. Isaacs’s column was called “Out of Leftfield.”

He was weird — and I mean that in the best way. His Newsday colleague Steve Jacobson said he once asked Isaacs what he was writing and Isaacs responded, “Don’t worry. It won’t be what you’re doing.” When Isaacs learned that Kansas City A’s owner Charlie O. Finley had put sheep in a meadow beyond the outfield fence, he sat with the sheep and filed a story. In 1961, Isaacs went to Northport, Long Island, to watch Jack Kerouac play a simulated baseball card game, featuring players like “Wino Love” and “El Negro.”

“I usually play it alone when I’m in the woods,” Kerouac told him. When you get material like that, you get out of the way and write it straight.

It was the “celebrated breast-or-bottle incident,” as Isaacs somewhat ruefully called it, that made him infamous. At the 1962 World Series, Yankees pitcher Ralph Terry told reporters his wife had been up late feeding the baby. Without pausing, Isaacs asked, “Breast or bottle?” There are still accounts that portray the question as a reporterly indiscretion, a pit stop on road to TMZ. The truth is, it made Terry smile, it made the other reporters laugh, and somehow the Yankees clubhouse retained its blushing innocence.

In the late 1950s, Isaacs met writers Larry Merchant and Lenny Shecter and made his rebellion into a movement. Isaacs wanted to call the group the Rat Pack, but the name was taken. He settled on the Chipmunks, after the word came sputtering from columnist Jimmy Cannon’s lips. (“You sound like a goddamn lot of chipmunks.”) The Chipmunks had a number of literary influences. Hemingway, of course. The Daily News’s Dick Young. And A.J. Liebling. “We all worshipped Liebling,” Merchant once told me. On the road, the Chipmunks exercised their gluttony through the A.J. Liebling Marching and Chowder Society. Isaacs met Liebling once at a fight weigh-in. He sidled up to him, wanting to see what the fat man was getting in his notebook. But Liebling crab-walked away from him. Isaacs moved in again; Liebling edged away. Finally, Isaacs realized that Liebling, who was in his final innings, was hard of hearing. He was trying to orient his ears toward the manager.

The Chipmunks reported diligently, wrote funny, and stood for righteousness. They formed a youthful counterweight to older, crustier writers like Cannon. Isaacs once said, “Cannon was a very good, conservative dresser. I was sloppy. Cannon always said, ‘Why don’t you dress better?’ He’d needle me. So one year, for some strange reason, I wanted to have a corduroy sports coat. I went to Brooks Brothers. As I turn the corner, there’s Jimmy Cannon! And right off the top of his head he says, ‘What are you doing here? A rag picker wouldn’t put his hook in you!’”

Isaacs had been Newsday’s Yankees writer, the most coveted job on the sports page, but in 1962 he switched to the Mets. His colleagues thought he was nuts. The Yankees (champs in ’61, ’58, ’56 …) conferred a certain glamour onto their press corps; you could get good placement in the paper, even quickie book deals. Isaacs didn’t care. He was as destined to discover the Mets as Roy Blount Jr. was the Steelers and Jimmy Breslin was, well, the Mets.

Casey Stengel, the Mets’ manager, became Isaacs’s adopted uncle. Isaacs found an oracular wisdom in Stengel beneath the nutty quotes. Of course, Stengel was also a goldmine of nutty quotes. When the Mets shocked the Yankees in a ’62 exhibition game, Isaacs had Stengel saying of outfielder Joe Christopher, “I love him. I love him. Tonight I loved him. Last night I didn’t.”

It took a Chipmunk to realize that the Mets’ awfulness was the story. Marv Throneberry, a failed Yankees prospect, became the Chipmunks’ antihero. Richie Ashburn, a Hall of Famer playing out the string, was their best source. (Chipmunk Steve Jacobson once saw Throneberry sitting under a leak in the Polo Grounds roof. “You deserve it, Marv,” Ashburn told him. To which Throneberry replied, “I certainly do.) When the Mets lost their season opener to the Cardinals, Isaacs began his Newsday story like this: “There is no Santa Claus, the meek shall not inherit the earth and the Mets will not win all their games.”

It was one of many rebellions. Isaacs and the Chipmunks stumped for Muhammad Ali (and called him that). Joe Namath’s hair didn’t give them the vapors. They were among the handful of heretics who didn’t care for Vince Lombardi, the king of pro football. “I found him overbearing, condescending, hypocritical,” Isaacs once wrote. “He demanded and got a sycophantic press.”

I suspect that because Isaacs wrote like such a gentleman — notice the kind tweets from the networks he covered as a sports media critic — that his impact will be diminished. Sprightliness does not get you immortality, and those wielding bigger sticks — Shecter, Bob Lipsyte, even Cannon — receive more attention. But what Isaacs was writing was expanding the breadth of the sports page just as much; Isaacs’s moral compass was just as true; and his insurrection, though quiet, nearly as profound.

I got to meet him a couple of years ago. I drove to Haverford, Pennsylvania, where he and his wife, Bobbie, had moved to be near their grandkids, and asked to take him to lunch. Isaacs didn’t go out to lunch much; he had to ask around the retirement village to find a place. We settled on a restaurant next to the railroad tracks. His hands shook, and driving was a bit of an adventure, but we ate like Marching and Chowder Society members and ordered two desserts.

Isaacs had found a website that wanted to publish him and was still sending in weekly columns. The Kentucky Derby was coming up, and a horse called Uncle Mo was the favorite. Isaacs, typically, had found a side door. “I could write a whimsical column about Uncle Mo,” he said. “The first time I was taken to the racetrack, at age 16, was by my cousin Moe.” Moe hid Isaacs under a fedora. The guy at the gate recognized the ruse, but let him in anyway.

“My wife says, ‘When I see you looking out the window, I know you’re working,” Isaacs told me later. Bobbie was home when we made it back to the house, and she said, “Stan, I bet he’d like to see your office.”

Isaacs showed me into a small, neat room. The faces of Ali, Merchant, and Liebling looked down on us from framed pictures. “I’ve got every book Liebling ever wrote,” he said proudly. More interesting were the rows of binders that contained every story Isaacs ever wrote, starting in 1954 and ending in 1992 — from Eisenhower to H.W. Bush, from Jackie Robinson to Robbie Alomar. We went through ’em for a while, finding a stirring defense of Ali, some rankings of the best chocolate ice creams on the planet (Isaacs ranked them every year), and a column about a Flemish Renaissance painting in which Isaacs — and only Isaacs — had seen something resembling buck-buck.

I asked if I could take a few columns with me to make copies. He said, no, he couldn’t let me do that. I got the sense that if I carried away those precious words, those silly mustaches, Isaacs thought the place would crumble like a temple in Indiana Jones. Those binders were his life’s work. We made copies with his printer.

“When we came along, New York newspapers were stale,” Isaacs said. “They were predictable … I don’t think we were revolutionary. I think we infused fresh voices and a fresh approach and more honesty.” Stan Isaacs had such a light touch that Goliath never saw it coming.