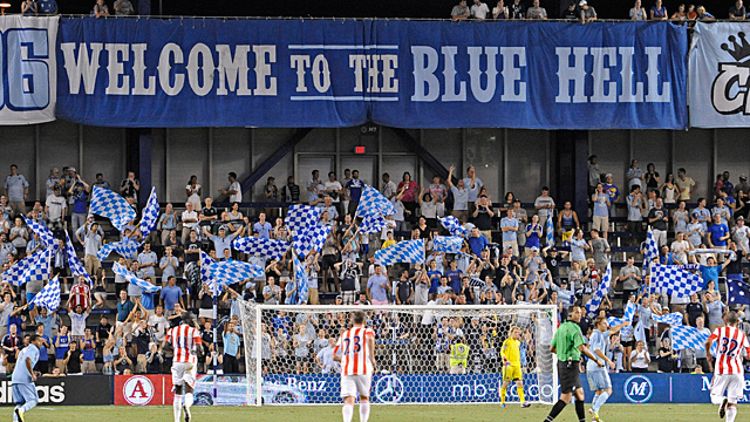 Soccer viewership on English-language stations in the United States is growing. Last week’s match between the U.S. and Mexico drew a 1.6 overnight rating and 2.39 million viewers on ESPN, more than double the previous high for a World Cup qualifier on the channel. Fox Soccer Channel may be shutting down, but Champions League broadcasts are a key element to its replacement, Fox Sports 1. NBC paid $250 million for the rights to English Premier League games for three seasons and will televise six live games a week. Executives hope the matches will help grow the presence of NBC Sports Network.

Which brings us to Major League Soccer. In 2011, NBC bought broadcast rights for a fraction of what it paid for the EPL, reportedly $10 million per season. Ratings are improving but are still relatively small. A recent rivalry game between the Portland Timbers and the Seattle Sounders had 209,000 viewers on NBCSN and came at the end of a 10-hour blitz of MLS coverage. The fact that NBCSN would air the domestic soccer league for an entire Saturday is undoubtedly progress, even if the ratings are climbing only incrementally. But national figures are one thing; after attending a few New York Red Bulls games and watching a few more on MSG, I wondered how MLS was doing on a local level. Specifically, were more fans watching games in person or on television?

Local television ratings are hard to come by, but I managed to track down a few. (For our purposes, I only included English-language broadcasts.) I started with my hometown team, which featured Designated Players Thierry Henry, Rafa Marquez, and Tim Cahill for at least part of the 2012 season. The Red Bulls finished third in the Eastern Conference last season before falling to rival D.C. United in the quarterfinals of the playoffs. The team averaged 18,281 fans per game in 2012, down 7.16 percent from the previous season, when the glistening, magnificent 25,000-person Red Bull Arena opened. (Overall, the league averaged 18,807 fans per game — a 5.2 percent uptick from 2011.) According to MSG PR, 19 game-day broadcasts had an averaging rating of 0.3, meaning a little less than one-third of one percent of the roughly eight million homes that carry the network watched the Red Bulls. Do a little math, and total viewership checks in somewhere between 25,000 and 30,000 televisions. Not huge numbers but more than the number of people at Red Bull Arena. (For the sake of comparison, while the New York Knicks and the New York Rangers significantly outdrew the Red Bulls on MSG with a 3.3 and a 0.99 rating, respectively, the New Jersey Devils and the New York Islanders brought in just a 0.33 and a 0.21.)

Sporting Kansas City remade and rebranded itself in 2010 and is one of the league’s recent success stories as a result. The team finished first in the Eastern Conference in 2012, packing then–Livestrong Sporting Park with nearly 19,500 fans, a jump of almost 10 percent from the previous year. Local television ratings show similar growth. “We started getting ratings in 2010, but they started at virtually nothing,” Chris Wyche, executive vice-president of operations, says. “Our season average for 2012 was 1.1, but we had a late game that pulled a 3.7 and we were as high as 5.1 for a 15-minute day-part.” He also cited a significant uptick in the 18n–34 demo, a key metric for advertisers.

But unlike the Red Bulls, far more people see Sporting KC in person than on television. The reason is the size of the market. Wyche says there are just less than one million TV households with access to Sporting matches, meaning only 10,000 televisions are tuned to the game. SKC ownership expects these figures to continue growing, however, and Wyche says the first two games of the year posted a 1.3 rating despite being on a new channel.

The Seattle Sounders, Exhibit A for MLS success, boasted a league-leading attendance figure of more than 43,000 fans per game in 2012. Five matches shown on NBC’s KING 5 received a 2.5 rating (45,000 viewers), while the 20 fixtures on KONG 16 earned a 1.8, or 33,000 viewers. (Seriously: KING and KONG.) Impressively, about 64,000 televisions tuned in to the match against Chivas USA near Los Angeles on August 25. The Sounders, perhaps feeling the support, won, 6-2, thanks to Fredy Montero’s hat trick.

When taken in total, MLS’s local television numbers tell a story that is fairly consistent with the national one: The league is growing slowly and steadily, with some franchises staked to much better positions than others. There is the success of Seattle and Kansas City, but there’s also black sheep Chivas USA, which doesn’t have a local television partner after averaging just 5,500 homes a game during the two previous seasons in the large Los Angeles market. Like everything with MLS, growing the local television audience is a work in progress. Next time you go to a game, look around: You can probably see more people in the stands than the number who are watching at home.