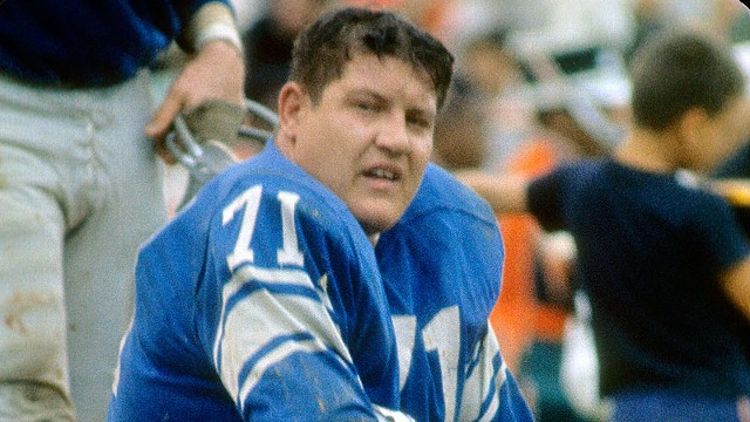 I imagine there are worse things to be remembered for than felling a horse with a single punch, but it should be noted for posterity that this was not the only highly theatrical brawl of Alex Karras’s career. In 1963, a professional wrestler named Dick the Bruiser strutted into the Lindell AC Bar, a Detroit pub Karras partly owned, and Dick the Bruiser was intent on stirring up trouble. Karras and Dick the Bruiser were scheduled to wrestle that coming Saturday, but Dick suggested they settle it then and there, and so they did, reportedly shattering windows and engaging patrons and passersby and several of Detroit’s Finest in the fracas. Dick the Bruiser wound up with five stitches, but Karras lost the subsequent wrestling match, so I guess we can call it a wash.

On Wednesday, Karras, the former Detroit Lions defensive lineman turned actor, died from complications of kidney failure at age 77. Outside of a football career that is arguably worthy of posthumous enshrinement in Canton, he will be remembered largely for a pair of roles: as raging, Brahma-riding homunculus Mongo in Mel Brooks’s Blazing Saddles and as slow-witted and kindhearted adoptive dad George Papadapolis in Webster. In reality, Karras was neither a thoughtless goon nor a dummy; he was a literary character come to life, a willing and able conveyor of the sort of self-conscious tough-guy stance that helped build a ferociously violent sport into a national pastime.

As captured on the pages of George Plimpton’s Paper Lion, Karras would entertain his teammates with stories of his past lives as Hitler and George Washington. His sense of humor was deep and random: He once ran a charity golf tournament in which a cannon would occasionally be shot off behind the first tee to keep people on their toes, and he confessed to Johnny Carson his boyhood fear of playing football against “hairy bodies.” According to Plimpton, Karras had an “untrammeled brain,” as evidenced by an offhand comment he made when the two were lying in the grass one day at practice. “You know,” Karras said, “there’s only one man I never really liked at all: Will Rogers.”

(Rogers, of course, was famous for saying he’d never met a man he didn’t like.)

Karras defied the natural order of the NFL in the 1960s: The “Mad Duck” was smaller than most of the linemen he went up against, but incredibly agile — his coaches called him “Mr. Twinkletoes” — and he kept in shape by smoking cigars in the shower. He wore thick horn-rimmed glasses off the field but refused to dally with contact lenses, and was so blind that most of the time he couldn’t recognize the player across the line of scrimmage. Once, feeling he’d been held on the previous play, he bowled over an offensive guard and stomped on him, not realizing that it was his brother Ted. Another time, sitting on the bench with a teammate who also had optical failings, he asked, “Do you think we’re facing the right way?”

When the NFL came after him because the Lindell AC had been linked to gambling and organized crime, Karras refused to relinquish his share; he admitted he’d placed small wagers on his own team, and he was suspended, along with the Packers’ Paul Hornung, for an entire season. A defiant Karras, long suspicious of the league’s overarching control of its talent, bashed NFL commissioner Pete Rozelle and took up pro wrestling as Killer Karras, and while he promised Rozelle he would sell his interest in the bar, he apparently didn’t do so until years later.

In a way, even if his actions were potentially dangerous to the burgeoning integrity of the league, Karras’s iconoclastic persona was a boon for both him and Rozelle. He lent a soul and a conscience to a ferocious sport that was on the cusp of unprecedented growth, and Plimpton, laboring behind the scenes with the Lions as a hapless quarterback, merely spread the word. Plimpton once put a recording device on Karras during a game — the resulting transcript is one of the most charming chronicles of the brutal pastime you will ever read. (Jeez! Again! My foot’s smashed again! Oh my! First play and my foot’s smashed. I’m 123 years old.)

When it was time to make Paper Lion into a film, Karras played himself, completing most of his scenes in one take. After he retired in 1971, he took on roles in sitcoms and TV movies and on game shows, allowing himself to be floored by a female professional wrestler in Match Game ’75; he had a three-year tenure on Monday Night Football, where he pegged bald-headed Raiders lineman Otis Sistrunk as hailing from “the University of Mars” and crooned Lou Holtz’s “neat” New York Jets fight song to a giggly Howard Cosell; and he met his wife, Susan Clark, on the set of a television movie about Babe Didrikson Zaharias.

Later, Karras and Clark would play husband and wife on Webster, a Diff’rent Strokes clone designed to maximize the adorability of Emmanuel Lewis. But even amid the mawkishness, there was something about Karras’s vulnerability that resonated, just as it did in that moment in Blazing Saddles before Mongo opens the candygram. He was the tough guy who never really looked like he wanted to hurt anyone.

The only tragedy here is that even Karras’s good-natured embrace of this persona could not shield him from the repercussions of all that violence: In the last year of his life, he joined a lawsuit against the NFL, citing dementia and other ill effects from years of head-on collisions. He will be remembered, above all else, for an act of aggression he never felt fully comfortable committing.