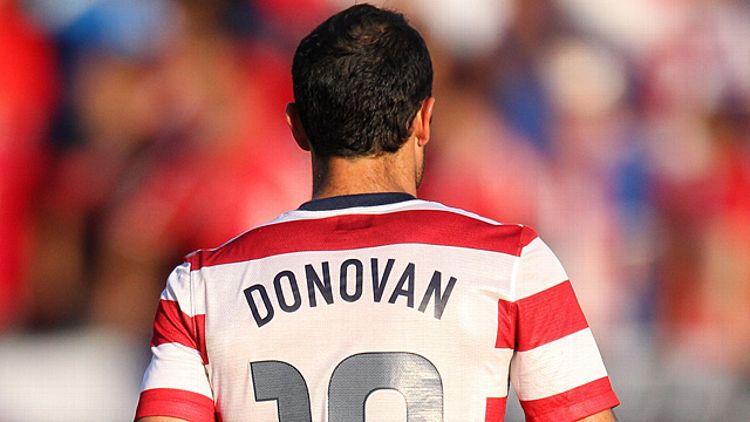 Eight days ago, the United States men’s national soccer team fell, 2-1, in Honduras to open the final round of 2014 World Cup qualification. The defeat was notable for a few reasons, one being the fact that it was the first meaningful Hexagonal round match that Landon Donovan’s missed in more than a decade. The tepid performance on the field, which saw the Americans lack the spark of creativity so often brought by the team’s all-time leading scorer, renewed calls for Donovan to once again don the Stars and Stripes. Someone even started a White House petition calling for President Obama’s intervention in the matter. (The initiative looks destined to fail. As of this writing, it had 36 signatures, 99,964 short of the number needed to spur action from the Oval Office.)

Donovan, for his part, hasn’t publicly said when, or even if, he will rejoin the Los Angeles Galaxy, a move that would have to come before he returns to the American lineup. Galaxy coach Bruce Arena said that after speaking to Donovan, he expects him to come back in “the near future,” but didn’t offer anything more specific. U.S. Soccer Federation president Sunil Gulati was even more vague, saying, “I have no doubt he’ll play at some point,” although it was unclear if this was in reference to the Galaxy or the USMNT. Gulati also made another solid and overlooked point: “We’ve got to go on without Landon at some point — today, six months from today, or two years from today.”

The USMNT continues to prepare to play without one of its best offensive attackers. “Right now, he’s not here, and we have no problem with that because we have a team full of talent, a team full of players [who] know how to get jobs done,” Jurgen Klinsmann said before the loss to Honduras. “When one of them isn’t there, another one jumps in. There’s a huge opportunity for whoever gets that spot.”

In an interview with FIFA.com, Michael Bradley echoed his coach. “Not having Landon is something that we’re used to by now. He has been an important part of this team for many years, and I’ve been on the field with him for some big days. I take pride in that, and what we’ve done together. In his life he feels that he needs a little time to recover and figure out what comes next,” he said. “At the same time, though, the game never stops. We’re determined to use the group of guys we have to step out on the field and do everything to get to the World Cup.”

But underneath the smiles, the kind words, and the respect for his interminable decision-making process, you can detect a growing, understandable level of frustration. Is Donovan in or is he out? Increasingly, it looks like he may be out, as far as the USMNT is concerned. If Arena’s timeline is to be believed, then there’s no way the star will be ready for the Galaxy’s opener on March 2. If he’s not around for that match, not training and getting fit with the club, then there’s no way he’ll be with the national team when it plays Costa Rica in a must-win in Denver on March 22, then in Mexico four days later. If he misses those games, Donovan will have missed nearly a third of the Hexagonal. His teammates won’t appreciate the absence, sacrificing themselves and their careers while he hangs out on the beach. Furthermore, if you’re an American soccer player and you can’t get up for playing El Tri at Azteca, well, then you have some serious motivation problems. He could return for the three qualifying games in June — as Jurgen Klinsmann showed during the Timmy Chandler saga, he’s reluctant to close the door on someone he knows can help the squad — but if Donovan doesn’t appear on the roster in March, the chances that he wears the stars and stripes again will grow slimmer.

If that’s the case, if the 30-year-old attacker decides to walk away from the national team program at a time when his skills remain strong enough to contribute, the American soccer-supporting masses will be quick to crucify him. In their minds, it will confirm all those old fears: He’s too soft, too spoiled, too weak. Forgotten will be the 49 goals he scored for the USMNT (a total that’s nearly 50 percent higher than second-place Eric Wynalda’s), the 48 assists he dished out (more than double Cobi Jones’s total), and the thousands of minutes he spent helping bring the Americans to three straight World Cups. In its place, vitriol: Screw you, Landon. Why?

Why, indeed. Are there legitimate reasons that a guy in Donovan’s position would decide he was done playing for his country? I think so. First, the physical ones. He’s lost a quarter-step of that dodginess that kept him from enduring too many collisions, and he’s getting to the point in his life where glancing blows hurt a little more for a little longer. Playing for the national team is an honor, but it also takes a toll on your body. Soccer isn’t American football, but playing at a high level for a long time does have repercussions on long-term health and fitness. Donovan was rarely injured, then suddenly he was. That’s an incredibly frustrating feeling.

But more than anything, he’s mentally exhausted from being the face of the national team for nearly a decade. A lot of the game’s trailblazers were angered by his recent comments about the constant promotional work he’s done — rightly so, as players who came before him did this, as well — but that doesn’t change the fact that he’s been in front of the cameras, at PR events, and elsewhere promoting the game, the league, and the national team for what feels like forever. He has gotten rich off his talent and the visibility it’s brought him, but it’s a lot for a quiet kid from Ontario, California.

Donovan is thoughtful, articulate, and critical in a way more players aren’t, or at least in a way they aren’t in their public comments. The fact that he’s a good quote is part of the reason he’s so popular in a world of inane platitudes. Soccer has always just been one of the things he does, albeit on a world-class level. He always wanted a life after the sport. If that begins earlier than the most people would like, well, that’s not really his fault. He’s given enough of himself.

I’ve always felt a kinship with Donovan because he’s about my age, about my build, and about my level of male-pattern baldness. We’re both soft-spoken. I have some small sense of what it’s like when those aches take longer to heal, and I can see where he’s coming from. If Donovan walks into the sunset, I’ll be disappointed because he’s a pleasure to watch, but I won’t blame him. Burning out and fading away were never supposed to be the only two options.

After the U.S. loss in Honduras, I was sitting in the San Pedro Sula airport waiting for my flight when I got into a conversation with an American fan about Donovan. He couldn’t understand why he would stop. Playing in a World Cup qualifying game is something you dream about as a soccer player. True, I said, but Donovan’s already done that in three separate cycles. He’s accomplished more than pretty much any American soccer player ever. Sure, he fell short occasionally, but he can’t change that now. Too many athletes hang on for too long. Donovan is emo-anthem self-aware. What if he just wants to move on with his life? Is that so wrong?

Looks Like Rays Pitcher Joel Peralta Got His Neck Injury ... TO GO