I Suck at Football, Week 9: My Almost-Beautiful Matthew Stafford Fantasy 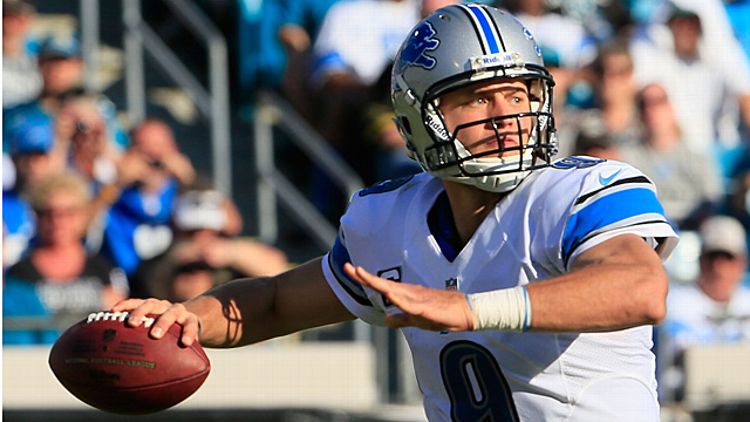 “I’m starting Matthew Stafford instead of Matt Schaub on Sunday,” I wrote.

“This will end in blood and tears,” Feyman replied. Then, after a minute: “Are you watching AM games at Ye Rustic tomorrow? Need a ride?”

“I always need a ride,” I wrote back. “But you’re not going to change my mind about this QB situation. Your team needs a shakeup.”

My wife sat across from me, frowning at her own laptop. She’s almost as football-illiterate as I am but someone at work talked her into joining a fantasy league at the beginning of the season. The auto-draft gifted her some kind of nigh-unstoppable murder squad and she landed in first place after Week 1’s games. Since then she’s refused to alter that initial starting lineup, because why mess with success, right? The Zen approach. She’d logged in for the first time in weeks just to verify that her team was better than Feynman’s, only to realize that they’d slipped into fourth place. Now she was frowning at her starting lineup.

I’d spent the last 45 minutes teaching myself how to “play” fantasy football by dutifully perusing link-baity “How to Play Fantasy Football You Imbecile/Lady” articles and typing Ask Jeeves–like search strings — “SHOULD I START REGGIE BUSH OR RYAN WILLIAMS?” — into Google. It’s usually around the 45-minute mark of reading about something on the Internet that I feel qualified to be a dick about it to people.

“Don’t you have Reggie Bush?” I said to her. “You should start Reggie Bush.”

“I am starting Reggie Bush,” my wife said. “I’m starting him because he had sex with a lot of people.”

“You mean besides Kim Kardashian?” I said.

“He’s dating a Kim Kardashian look-alike,” my wife said, “who’s now pregnant. He’s got a lot on the line. I think he’s going to perform better because he’s got a baby on the way.”

I walked over to her side of the table and studied her starting lineup.

“He’s not going to play because he has a broken foot,” I said, in the voice of someone saying something he’s known for more than 11 minutes. “That ‘0%’ right there means there’s a zero percent chance he’s going to play in a game tomorrow, so you’re not going to get anything by starting him.”

She sighed. “See, this is how you eff yourself,” she said. “You lose when you start looking at the numbers. It should be a mystery. They should call it Mystery Football.”

You lose when you start to actually care, was her point, and she was right. But I was starting to care. I was also starting to feel like Feynman’s starting lineup was a fixer-upper. At least one guy had the phrase “There’s no chance you can trust him” in his bio. I knew I needed to make a big move. But since everyone else on Feynman’s bench was on a bye week this week, I could only make a change at QB, which was good news for young Matthew Stafford, who I’d determined after minutes of research either would or would not be a better choice to start on Sunday than Matt Schaub, but would absolutely be playing in a football game that day. All football being essentially mystery football to me, I clicked “Move,” not unlike a boss.

My only fantasy-gaming experience prior to this week involved 20-sided die. I spent a lot of time as a kid playing role-playing games, immersing myself in bizarre-yet-rigorous fictional universes dreamed up by hippies in love with rules and violence — Dungeons & Dragons, yes, but also all the weird ones for gourmands too sophisticated for D&D, like Champions and Car Wars and Paranoia. The Teenage Mutant Ninja Turtles role-playing game was the best; I’m not sure I ever actually played it but I spent literally hours rolling up machine-gun-toting anarchist pickpocket opossum player-characters who never saw action, because that’s how fun its character-generation phase was.

Anyway: Fantasy sports always seemed like role-playing games for people who’d never be caught dead holding a dogeared copy of the After the Bomb module (or getting that reference) — a deeply nerdy activity unfairly de-stigmatized by its mostly hypothetical connection to real-world events involving manly athletic prowess — and I was against them on principle. You’ve probably guessed where I’m going with this. I watched football on Sunday as a fantasy-team owner and I had more fun watching football than I’ve had in two straight months.

Because I don’t have an actual geographic or sentimental team allegiance and I knew these posts would be funnier if I decided to follow a team that lost all the time, I have decided to spend this season rooting for the Cincinnati Bengals, whose season has obligingly become a real symphony of sorrow. But for the first time, when Feynman and I got to Ye Rustic, there was an actual Bengals rooting section on hand — five dudes in a vinyl booth, sporting orange and black stripes, living in hope inside the collapsed mine shaft of this season.

“I understand if you need to go sit with your people,” Feynman said to me.

“That’s no way to talk to the man who ushered in the Matthew Stafford era,” I said, “and the 500 years of peace and prosperity it brought with it.”

A crew of Bears fans took up residence at the tables behind us. They were cheerful, like they were already winners, and before long they started to win. Every time the Bears scored a TD they’d erupt like Mike Ditka, Chief Keef, and a plate of kielbasa had just been elected Lifetime Co-Presidents of Earth, high-fiving two-handed and bellowing “Bear Down, Chicago Bears” in beery a cappella.

There were no Bears on Feynman’s team. But it didn’t matter. I was jealous of the Bears fans’ ability to access joy, but I stood apart from it, just as I stood apart from the Bengals fans as Denver gently smothered Cincinnati 31-23. The only score I really cared about was the score on my phone, which crept up to what I believed to be a commanding 49 before realizing it was out of 100. And when the Panthers’ DeAngelo Williams — whom I’d considered trading away for magic beans on Saturday just to see what it felt like to trade somebody — scored a 30-yard touchdown against the Redskins, I felt like I’d actually accomplished something (even if Williams, as it turns out, kinda hadn’t).

I still lost, I should point out. Matt Stafford threw no touchdowns, as if actively trying to hurt me, while Matt Schaub had a beautiful game against the Bills. I’m writing this on Monday afternoon, and it’s pretty clear that the team I’ve spent 24 hours thinking of as “my team” is going to lose, but I understand why we’re going to lose. And yet I’ll still watch, because I feel like there’s still a path to victory out there for my guys — even if it involves the Eagles’ Alex Henery somehow kicking 14 field goals against the Saints in a game that begins with Michael Vick’s knee exploding.

About Last Night: It's Election Day!