I Suck at Football, Week 8: Stinking Up October 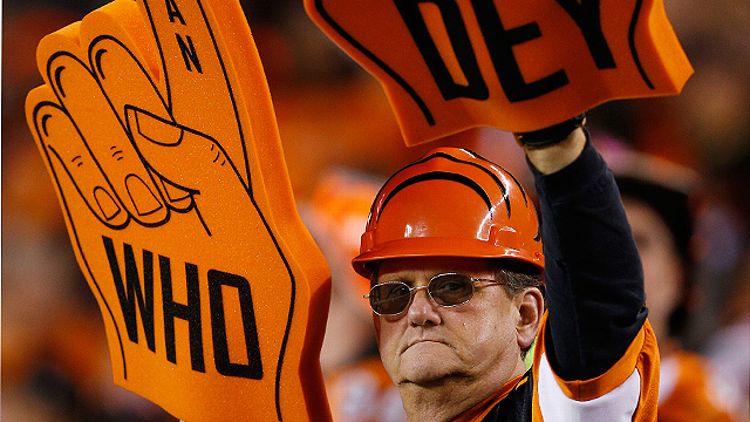 Bye Week for the Bengals. With the NFL trade deadline approaching (look at me, I’m a sportswriter now), it’s a time for stock-taking, for an honest look at how we got here and what we could be doing better.

So here’s what happened: I went to Vegas at the end of September, and ever since I got back I haven’t been quite right.

I promise not to dwell on this. I went to Vegas, and sat in a seminar room listening to creative people talk about creating comics and movies, about the how and why of Making Things, and instead of coming back fired up to Make Things myself, I came back convinced that it was too late for me, that I’d allowed part of me that could once have Made Things to atrophy and die. But the specifics aren’t that important. It was a slump, and every slump has the same arc. I wrote nothing of consequence and tortured myself about it. I starved myself of human contact — with my wife, with my friends, with the guy the landlord pays to come around and frown at the grass — because How’s it going? was a question I didn’t want to answer. I kept whatever was wrong with me to myself, like the guy who waits until the end of the gunfight to reveal that he’s been gut-shot the whole time.

And I didn’t learn to parallel park, like I’d meant to, which kept me from getting a driver’s license, like I’d meant to, so at the end of the month, as at the beginning of the month, I was still a 35-year-old man riding my daughter to school on a swaybacked lady-bike that weighed 800 pounds and steadfastly refused to stay in fucking gear on even the slightest of inclines. Stupid metaphorical lady-bike.

And I went through all of this while also rooting for the Cincinnati Bengals.

In Vegas I bet the cash in my pocket on the Bengals and the Bengals won, and for a minute I thought maybe our fates were yoked together, that my choosing to ride or die with this squad was somehow the butterfly-wing beat that would change their story. If you’ve been following this column you know how that worked out. They — we — kept finding new ways to lose. I knew I wasn’t the hex any more than I’d been a good-luck charm that one week, and that the Bengals weren’t hexing me, either. I couldn’t blame them any more than I could blame my funk on the Santa Ana winds (way less mysterious and reality-altering than Steely Dan led me to believe) or the failure of Trap God to be anything but a flatulent stash-house grab bag lacking even one new Gucci Mane song as good as “Plain Jane.”

“I kind of summed it up to the football team. I thought we were very, very good at stinking up October and we need to do a cleanse,” said Bengals coach Marvin Lewis on the 21st, the day after we lost to the Steelers. “And the best thing going forward is to be better in November and December, which is the key because we kind of erased a lot of the positives that we had in September. We found a way to flush them down the toilet in October.”

Not exactly “Clear eyes, full hearts, can’t lose” — but I took it personally anyway. I wasn’t in a position to argue.

On Friday, in the midst of all this, we — my wife and I, not me and the Cincinnati Bengals — went to see Bob Dylan at the Hollywood Bowl. Dylan’s new record Tempest is, I’m sorry, kind of a damp squib. It’s no Time Out of Mind. It’s no Trap God. But we’re on a legacy-act tour, my wife and I, catching the greats before they die. I’d never been to the Bowl before and I’d never seen Dylan live.

The Hollywood Bowl is beautiful, like an amphitheater on a forest moon where people might gather to celebrate the end of a space-war. Dylan is — well, Dylan’s Dylan. And he’s also 71.

I should say for the record that I’m a partisan. I’m a fan from way back. I stick up for the albums nobody likes. I spent a lot of flyblown late-summer afternoons getting heavy into Self Portrait this year and I feel like I’m this close to getting Planet Waves to reveal itself as a masterpiece. Also, I grew up with the Dylan-is-willfully-unintelligible-onstage thing, as a rock-critical trope and a Saturday Night Live sketch premise. So I thought I was prepared for what Dylan sounds like now. I wasn’t prepared enough.

Dylan sounds like Smaug burping the alphabet. He sounds like a Jawa talking through a drive-through speaker. He sounds like he’s singing in Sanskrit. Reviews of his Never Ending Tour shows politely frame what he’s doing with these tunes, vocally and arrangement-wise, as a transmogrification of the material, the sign of a perpetually restless and unsatisfiable artist chafing against a lifetime’s worth of impossible expectations. And maybe there are nights where that’s still true. This was something else.

At the beginning of every song, there was this long, solemn, respectful silence while everybody in the audience played Name That Tune — I’d lean over to my wife, every time, and say “Blowin’ in the Wind,” mock-confidently, because I am a comic genius — followed, once enough people detected a familiar lyric amid all the bargle bargle zowff ugggh bugs bugs, by the most bemused applause you’ve ever heard. It was hilarious. There was something passive-aggressive about it, too — Dylan, so irked by approbation his whole career, now plays shows designed to reveal that approbation as false and totally disconnected from the reality of what takes place onstage, as if to prove the point that no one’s ever understood him. Or maybe this is just what sounds right to him now, I don’t know.

It was a good night. We were up in the cheap seats without binoculars, under the stars in a sea of old people.

Me: I just figured out which one is Dylan. He’s wearing a white hat.
Her: [squinting] Pulled down pretty low. He doesn’t want people to see what he looks like.
Me: Do you really think Bob Dylan thinks people don’t already know what he looks like these days? Do you think he cares?
Her: I think he’s like a restaurant critic.

In the seat next to us there was this guy — 40s, Fred Norris newsboy cap, trying to concentrate, giving Bob the focus you’d give Shakespeare if Shakespeare were still around and reading his stuff in public. We were enjoying the absurdity of the whole thing a little too much, my wife and I, and this guy was not having it. He gave us a glare during “Ballad of a Thin Man” that was obviously the first of a series of interactions that would ultimately lead to me having to fight a guy whose Web-browser homepage is probably Expectingrain.com. (Essay question: Who is more Mr. Jones, the person who doesn’t understand what is happening here, in this scenario? Please answer in 400 words or less.)

We moved up a few rows. Dylan played “Like a Rolling Stone” and in the next section over a girl in white jeans jumped up on her seat and punched the air on every line. Girls in white jeans are the spirit of rock and roll. Then came the pre-encore closer — a crackling, let-them-guns-blam “All Along the Watchtower” that felt like the work of an entirely different band. It couldn’t have been better unless Dylan had introduced it by saying “This is a song Watchmen stole from Jimi Hendrix — we’re stealin’ it back.” They really leaned into it. Charlie Sexton’s a beast.

Why hadn’t they played like this all night? It was perverse. It was fascinating. It was more interesting than the last eight good rock shows I saw. You should go see Dylan, if you can, while you can. He’s operating outside the realm of right and wrong, creatively.

But at the risk of sounding like I’m privileging music, which I like to think I kind of understand, over sports, which I don’t claim to understand even remotely, that’s the difference between football and live rock music — there’s not a whole lot of room for aesthetically justifiable failure in football. Sports failure is unambiguous. It’s numbers on a screen.

Maybe I need to stop judging myself according to a pitiless win/lose binary. Maybe that’s the only way Dylan gets to stay Bob Dylan for this long. Maybe I need to silence the part of my brain that talks to me like Marvin Lewis does here, in this postgame speech from 2009, before he started expressing his feelings about his team’s play in colonic-irrigation metaphors (note: one NSFW adjective at the end).

On Sunday, without a Bengals game to grit my teeth through, I sat in a bar between Oakland fans yelling at the Raiders-Chiefs game and Dallas fans yelling at Giants-Cowboys, texting my friend Erwin Schrödinger in New York about the Frankenstorm and that video game where you’re a colonial ninja killing redcoats and my inability to figure out a conceptual bridge between Bengals trade rumors and time’s toll on Dylan’s vocal cords.

Schrodinger: Tony Romo’s career seems to be at the same point as Dylan’s two years after “The Hurricane.” There you go: forced narrative!
Schrodinger: Soon Romo will be “street legal.” And obsessed with the Pope.
Pappademas: I am not above stealing these jokes from you.
Schrodinger: Take them. Eat them alive.
Pappademas: What is the motorcycle accident in this metaphor? Jessica Simpson?
Schrodinger: Much like Dylan, Romo has dated a “significant singer-songwriter.”
Schrodinger: His motorcycle accident was when he fumbled the snap in a playoff game while holding for a critical extra point. It’s actually an apt metaphor, because he’s never been the same since.
Schrodinger: Also like Dylan, Romo needlessly wears dumb hats in public.

Final score was 29-24 Giants, despite Romo’s best efforts. This goes out to him: