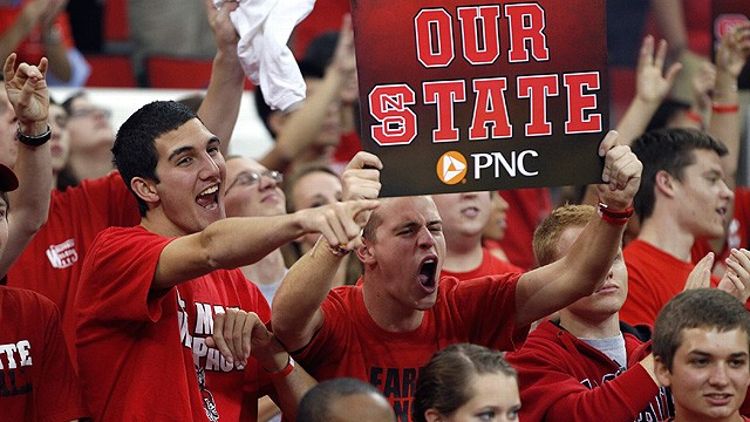 Last week, we looked at the Dangerous Outsiders, the Royal Blues, and the Title Snipers. See the box below for those links. This week, we turn to four legitimate championship contenders, starting with the Wolfpack of NC State.

Today marks my only deviation from the consensus top five. Indiana, Louisville, Kentucky, Ohio State? Sure, they’re among the sparkling elites. But no. 5 Michigan? I’m not sold, for reasons enumerated last week in the Title Snipers post. Instead, my pick for the fifth contender comes from ACC country, where the NC State Wolfpack might be about to emerge from the shadows of Duke and Carolina for the first time since 1987 — the last year they won a conference championship.

NC State: The Weight of Expectation

The Gist: If there’s any fan base in college sports with a defeatist attitude that compares to the misery of pre-2004 Red Sox Nation, it’s NC State’s. There’s a motto in Raleigh to honor this mind-set, a depressive epithet that waits on the lips of every Wolfpack fan, ready to be uttered at a moment’s notice: “NC State shit.” Urban Dictionary defines it as “an inevitable chain of events in a sports [sic] where a blatant bad call or bizarre unlucky play causes a total collapse of confidence, resulting in multiple, unforced, and devastating errors.” That UNC punt return for a touchdown last Saturday, when the game looked like it would head to overtime? That’s NC State shit all the way. Any other fan base might see their team included among the preseason national title contenders and be happy, but I can guarantee the Wolfpack reaction goes like this: “NOOOOOOOO!”

They expect bad things to happen, and telling them they have a title-worthy squad is a special form of torture. Well sorry, NC State fans, but you have a great, veteran-led team, a charismatic coach, a dazzling point guard, and CBS’s 21st-ranked player in the country. I hate to say it, but the evidence is clear, and the Wolfpack can absolutely win a national championship. Now go lock yourself in a basement until March.

Strengths: I can’t talk about State without talking about 6-foot-5 junior point guard Lorenzo Brown. I’m a sucker for quick, reedy guards with great handle who make spectacular passes and can stick a 3, and Brown fits the bill. He definitely joins FSU’s Michael Snaer and Michigan’s Trey Burke on my preseason All-Favorites Team (yeah, I have two point guards … deal with it). For a little taste of what he can do, check out this quick highlight video I made from State’s win over Miami late last season:

And he’s not just a fun offensive force — Brown also had 1.8 steals per game last year, tops in the conference, and his assist rate (assists per team field goals while the player is on the floor) was 32nd in the country.

But why am I fixating on Brown? He’s not even the best player on the team. That honor goes to C.J. Leslie, second-team All-ACC last season and a Player of the Year favorite in 2012-13. Leslie can shoot, leap, penetrate, and block a ton of shots on the defensive end. It was touch-and-go about whether he’d return to school or opt for the NBA draft, but the minute he chose Raleigh, his team became a title contender. He’s joined on the low blocks by Richard Howell, an emotional, 6-foot-8 brick shithouse of a forward/center and a natural rebounder. Sharpshooting senior Scott Wood, who hit 40.9 percent of his 3s last year, will team with freshman shooting guard Rodney Purvis, the fifth-rated prospect at his position. Purvis was cleared to play in September after some questions about his high school transcript, and will bring a fast, aggressive, athletic presence to State’s offense.

Coach Mark Gottfried likes to play uptempo — State was 87th in adjusted pace last year &#8212. He has the horses to run in 2012-13. And we haven’t even talked about freshman T.J. Warren, who looked spectacular in the team’s tour of Spain and the Canary Islands this summer and will fight with Purvis for a starting role at the small forward/wing spot. This could be one of the country’s most prolific offenses, and they’ll certainly be a load of fun to watch.

Weaknesses: It’s the little things that could hurt State the most. Brown, for all his electricity, could stand to turn over the ball a bit less. Howell is a beast down low but managed to infuriate State fans last year by committing stupid fouls and taking himself out of games. Purvis missed the Spain tour because of his eligibility issues and may take some time to get in game condition. And, to quote Gottfried, “he sometimes looks like he has snakes in his head.” The rest of us will have to figure out exactly what that means, but it doesn’t sound good.

The Wolfpack bench, after Warren, is fairly suspect; don’t expect a very deep rotation, a fact that may lead to fatigue for players who have been susceptible in the past, like Wood and Howell. Freshman point guard Tyler Lewis is the best bet to see moderate time as a reserve guard, though it’s anybody’s guess whether the baby-face, 5-foot-11, 157-pound Oak Hill alum can hack it in the ACC. Frontcourt giant Jordan Vandenberg (7-foot-1) and sophomore power forward Thomas de Thaey might be able to provide some spot relief for Howell, but not much more. Which is too bad, because I want them to be good enough to warrant the nickname “Double Dutch,” even though neither one is actually Dutch.

State lacks height overall, and may be vulnerable to big teams that like to play slow and take away their transition game. The November 27 game at Michigan will be interesting for exactly that reason — what can we expect from State in those grueling land-war-with-Russia-type games?

Relevant Les Misérables Quote: Loyal readers of the previews know by now that we’re giving each team a Les Mis quote to honor the sure-to-be spectacular film coming out on Christmas.

“One day more / Another day, another destiny, / This never-ending road to Calvary. These men who seem to know my crime / Will surely come a second time / One day more …” (YouTube)

Valjean’s intro to the final song of Act 1 fits State to a tee — there’s hope, there’s promise of a happy ending, and yet … NC State shit. Somehow, you think it will get ruined.

Confident, Insightful Projection: Call me a dreamer, but I love State’s style, and I think they’re going to succeed. I’m giving them ACC regular-season and tournament titles and a trip to the Final Four. If you don’t believe me, take some inspiration from Mark Gottfried’s speech before his team’s upset win over Georgetown in the Round of 32 last year. Somewhere, there’s a plane waiting to take these guys to Atlanta.

I Suck at Football, Week 8: Stinking Up October