I Suck at Football, Week 5: Here’s a Ginger Joke About Andy Dalton That You Might Not Like 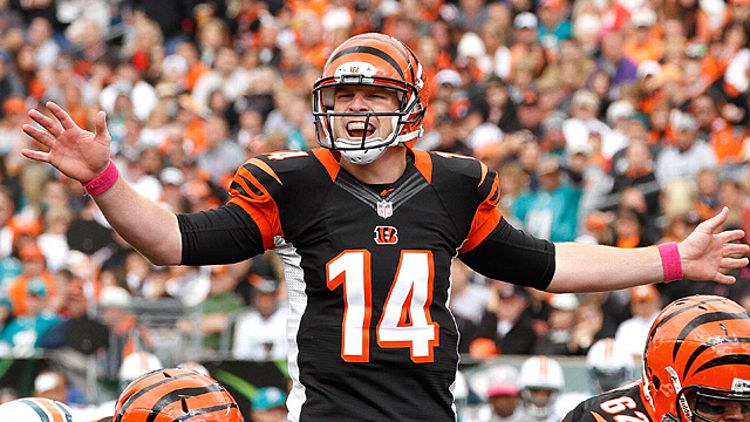 I am in the desert.

We are in Palm Springs, my wife and my daughter and I, in a rented house. Mostly I float in the pool like Peter Stormare in The Big Lebowski. I am a nihilist, I believe in nothing, I have access to an inner tube printed with the image of a rubber tire.

The rest of the time I drive my wife’s car around. I’m a 35-year-old man with a learner’s permit; this is the first time I’ve ever driven, and driving still feels like dreaming, the way I imagine flying would if you could do it. It’s the desert; the streets are long and empty of cars. I pick a point on the horizon and drive to it as fast as I can. I blast music from when I was 16 and busy doing things other than learning to drive. I can move my family from location to location at great speed, while my wife, unaccustomed to being a passenger, frowns at the way the pool chemicals have melted the gel-nails off her fingers.

I can drive, and I am the world’s greatest dad and the world’s greatest husband. No, I don’t have a mug. Cool don’t advertise. The streets of Palm Springs already know. I pick a point on the horizon, where a wall of mountains shoots straight up at the edge of town, and I turn on Sugar’s “A Good Idea” and the steering wheel button that gooses the volume is like a second throttle.

And then on Sunday morning I leave my family and go to town and watch football, because I am on vacation but I am still a football columnist. (We are what we pretend to be.)

The stores and restaurants up and down this strip have water misters blowing all the time. Apparently these things don’t waste as much water as you’d imagine, but it still seems unconscionably resource-profligate in a desert context. You walk in and out of places and get covered in a light sheen of money.

I follow the flags and walk into the Hair of the Dog. No one has asked me to say the following, but if you’re looking to watch football in Palm Springs go to the Hair of the Dog and ask for Leslie. Leslie will greet you, offer her sink-wet hand for you to shake, ask you your name, and remember it. Thereafter, when your pint is empty or you look like you’re otherwise in need, Leslie will ask you by name if you need anything else. You can do a shot and kick the brunch hour in the nuts, if you’re feeling like an American hero. It’s nominally an English pub and there are packets of crisps, more or less — you can have Leslie pour a small bag of original-flavor Lay’s potato chips out on the bar in front of you on an unfolded napkin.

I don’t know if I like or understand the game of football better than I did a month ago. But I don’t feel like I look as much like an impostor when I walk in a place like this. I am another Sunday Ticketer drinking the heart out of a fine desert midmorning, posted up on a barstool between a guy with richly inky James Liptonian facial hair and a young couple drinking childlessly and cheering for Green Bay.

Everything else I’ve ever been into has brought me closer to people exactly like me. Indie-rock shows full of dudes who could be my stunt double. Comic-book stores full of Life Model Decoys. A few weeks ago after a midnight showing of The Master I looked up and to the left from the urinal and it was like looking into the accordioned infinity of a hotel-bathroom mirror — nine guys with glasses and beards, peeing and thinking about their dads.

To the extent that I’m actually “into” football it’s the first thing I’ve ever been into that doesn’t come with a built-in divide, demographically or classwise or agewise, from the rest of the world. Here in the Hair of the Dog there are retirees and rough-looking desert types and tourists and frat boys, and as far as they all know I’m one of them. Yeah, I know, football brings together otherwise unconnected Americans, shut down the sports-Internet, there will be no greater revelation today. But all this is new to me, the ambient camaraderie with strangers, so I have to mention it. I am an anxious person and I feel vaguely unwelcome all the time, even in situations where I’m ostensibly welcome; somehow the prickle of guilt that comes with passing as a football fan in football-fan contexts gives that irrational feeling a name and a source and allows me to put it aside.

Also, socially sanctioned pre-noon beers. I like that too.

“David, pleasure to see you again,” a guy who looks like Thor says to an older bald man in still-transitioning Transitions glasses taking a seat down at the end of the bar. “Congratulations on waking up today.” David gives him a “You got me” shrug back, as if this is indeed cause for congratulations and he has been properly zinged.

David makes the “shot” motion to Leslie and Leslie reaches for the Cuervo. It’s 11:36. I look up at the Packers-Colts game. Green Bay is up 21–3. In a little while, after halftime, they’ll give up 19 points and lose. The camera cuts to Dom Capers in the booth. Dom Capers already has a faraway look in his eye, which I gather is a look that Dom Capers gets sometimes. It’s like he already knows.

Someone plays AC/DC’s “Big Balls” on the jukebox around halftime, but this is not a moment for Bon Scott singing about his balls. Leslie has a volume-control button on the wall and turns it down. Double your entendres somewhere else, Bon Scott.

Leslie asks me by name if I need anything else. Honestly, it’s a little intimidating, this remembering-names trick she does. It somehow makes the transaction feel more like business and not less, harder to wave off. This is entirely in my head but it feels like I’m dealing with the Dale Carnegie of bartenders, an always-be-closing salesperson armed with a Jäger-shot machine. I buy another pint and take it outside to the patio.

Eddie — lazy eye, Mr. Pink voice, black DILLIGAF T-shirt — is smoking and drinking O’Doul’s and explaining to Robert, who’s in from London, how he got up here. Eddie says he waited 50 minutes for a bus that’s supposed to take 15. When the bus came, he says, “the Mexican bus driver was sitting there, talking to one of his Mexican friends, who had a Starbucks cup, and [the driver] said I couldn’t bring my energy drink on the bus.”

The selective product placement is Eddie’s, not mine — he really said “Starbucks” but didn’t specify an energy-drink varietal.

“I said things I shouldn’t have,” Eddie says, “and I walked all the way up here. I’m paying for it now.” He sighs. “It’s not like I had an open beer.”

A guy with a Freddie Mercury mustache asks Eddie, “Where’d you get that shirt?”

Eddie says his friend got it for him, at “biker weekend.”

“What do those letters stand for?” the guy asks — which, honestly, seems like it should have been the first question.

Eddie’s friend shows up. His friend’s in a Harley-Davidson vest, a buck knife on his waist, the firefighter Iwo Jima shot from 9/11 on his do-rag. Sort of grandfatherly despite all that.

He clocks somebody ripping by on a motorcycle.

“That was Susie,” he says to Eddie. “She’s the one that cuts the cans, and makes designs out of coffee cans? That was her.”

Eddie and his friend and Robert and another guy from London talk about some of the things Eddie said to the bus driver that he shouldn’t have, about insults and the universality of the middle finger vs. other non-universal F.U.-type gestures, like the English backward V-sign. The longbowman’s salute, Robert says, drawing back a bowstring with an arrow nocked in two raised fingers. “We used to be great archers.”

I realize I’m sitting outside their circle, laughing at their jokes. I realize I’m way more interested in what other people are saying than a normal person would be in this situation and that I’m probably weirding everybody out. I realize I’m acting like a spy. I realize there’s a Bengals game on and pull up the Internet on my phone and read some play-by-play.

Later, inside, I will ask Leslie if there’s any chance she can change the channel on the TV over the EXIT sign in back, the one that’s showing the Good Sam Roadside Assistance 500 out of Talladega, and she will look at me like a troublemaker — Alex, the troublemaker — and say no, that one is dedicated to NASCAR. There are rules at the Hair of the Dog, rules you don’t know about, rules other than the posted ones, such as “IN CASE OF EARTHQUAKE PAY TAB AND RUN LIKE HELL.”

Fine, Leslie, I’ll think to myself, making sure to use her name when I think it. I get the news I need on the weather report. I will pull up the Internet again and continue watching the Bengals lose in a drip-drip-drip of tweets and blog posts.

Eventually the Ravens will shut down the Chiefs and I’ll look up and Leslie will have changed one of the TVs over the bar to the Bengals-Dolphins game, just in time for me to watch them lose 13-17. Quarterback Andy Dalton will sit down, cramming a cap with a breast-cancer-awareness-pink brim over his red hair, looking despondent, like in addition to having lost a game he’s just found out the anti-ginger army from that M.I.A. video is waiting in the parking lot to haul him off for torture.

For now, though, I stay out on the patio, listening to the Londoners talk shit about the Scottish, and then Eddie starts to tell a joke.

“An Englishman, an Irishman, and a Scotsman are sitting in a bar … ”

Robert says, “That would never happen.”

Paris Is Rising: Among Les Thugs