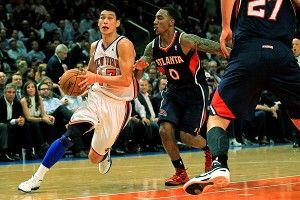 The New York Knicks have gone 9-2 since Jeremy Lin’s breakout game earlier this month. Lin’s domination has been, in large part, because of his skilled play off the pick-and-roll. The Knicks, who beat the Atlanta Hawks 99-82 on Wednesday and face the Miami Heat tonight, have set picks for Lin on 45.9 percent of his possessions. If you look at just his possessions in the half court, that statistic rises to 56.3 percent. All together, 45.3 percent of Lin’s points scored and 59.1 percent of his assists are the result of pick-and-roll plays. Other NBA teams are noticing, and they’ve thrown a number of different defense strategies at Lin, some of which have been much more effective than others. 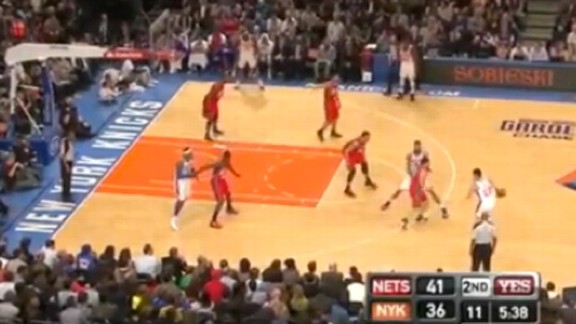 The soft show is one of the most common strategies against the pick-and-roll, especially when teams aren’t too familiar with the opposing point guard’s game. Given Lin’s sudden explosion, it’s not surprising that these five teams stuck with the standard pick-and-roll defense. The defender who is covering the screener essentially reverts to a zone defense. He backs off the screener and waits for the guy with the ball to penetrate, while the defender previously covering the ball handler gets around the screen. In the screenshot above, Jordan Williams backs off Tyson Chandler and waits for Lin to drive, while Deron Williams gets around the screen.

Why it works: This is the perfect defense to throw at a young point guard who has not played a lot of minutes. Lin is forced to think and make decisions. As he comes off the screen, there isn’t a clear lane open for him. He has to read the defense to find an open man, which gives the defense a chance to poke the ball away. When he finally decides to drive, he has already given the big a chance to get in position to challenge the shot.

Why it doesn’t work: If a point guard expects a soft show and knows what he wants to do with the basketball before he even comes off the screen, he can break down the defense. The defense has already committed two guys to stopping Lin, and now they have to rely on swift rotations. But Lin has already made his decision, and his offense makes a play faster than the defense can recover.

The soft show has become relatively ineffective against Lin because he adapts very quickly. After he sees a particular strategy from the defense a few times, he figures out how to attack it and begins to make right decisions. Notice how quickly Lin makes a pass out of the screen in the video above. And when he decides to keeps the ball, there is no indecisiveness. He sees a lane and attacks it.

This is a strategy that relies on the big defender to help. He steps out to cover the man with the ball for a split second. Then he returns to his man, hoping that he gave the original defender enough time to get back. The other four defenders play based on how long the big went over to help.

Why it doesn’t work: In general, NBA point guards are too good for this strategy. The big just ends up in a spot where he is ineffective, and usually the defense can’t rotate or help properly because they don’t know how long the big will hedge.

The strategy failed miserably when the Wizards tried to hedge against Lin. He quickly realized what the defense was going to throw at him, so he kept his dribble alive, waited for the hedging big to return to his man, and then attacked the rim uncontested. Against this defense, Lin posted 18 points and six assists on 18 pick-and-roll possessions, meaning the Knicks converted on well over half of these plays. 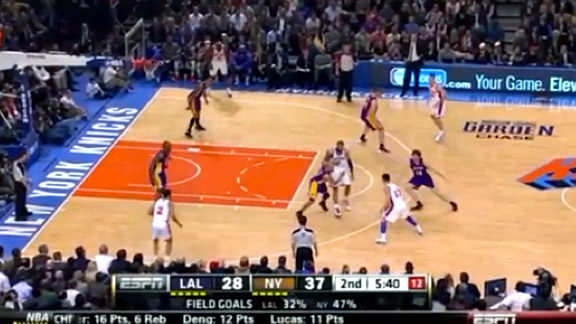 Why it works: When Lin first started seeing the hard show from the Lakers, he panicked and made bad decisions. In one of the clips above, you see him trying to split Derek Fisher and Pau Gasol, only to give up and throw an ill-advised pass across his body — something you don’t typically see from the fundamentally sound Lin. In another, he picks up his dribble early and telegraphs a pass.

Why it doesn’t work: Hard shows are all about timing. Show too late and it usually results in a foul on the big. Show too early and the point guard can slip past the screen to find an easy lane to the rim. Show too long and the big is forced to play defense 40 feet from the rim. All of these things happened to the Lakers. Again, Lin was quick to adapt. Lin punished Andrew Bynum by running into him when he realized he was going to come out and show late. He created contact and drew a foul. In another instance, Tyson Chandler noticed his defender going out to help way too early, which he exploited for an easy bucket.

Hard shows are difficult to maintain for an entire game. Instead of relying on it wholly, I’d like to see teams mix it in, using the soft show as well. Just by alternating strategies, teams can keep the otherwise adaptable Lin off-balance.

The Dallas Mavericks designed a trapping defense to use specifically against Lin. Anytime Lin came off a ball screen, he was trapped by the screener’s defender and his own defender, who had recovered from over the screen. Unlike a hard show, it wasn’t just a quick pressure-at-the-ball-handler-then-return-to-your-man scenario. Dallas held the trap until Lin picked up his dribble.

Why it works: Lin panics, and he is forced to try to create with two defenders breathing down his neck.

Why it doesn’t work: The trap doesn’t work for the same reason soft shows don’t work. Because the defense commits two defenders to one offensive player, the rotation by the defense has to be perfect, which, of course, can’t always happen. When Lin faces a team that traps him, he won’t be putting up a lot of shots out of the pick-and-roll. But he will rack up the assists, spotting open teammates and getting the basketball out of his hands quickly.

Strategy 5: Keep Him on His Left
Employed by: Minnesota and Sacramento 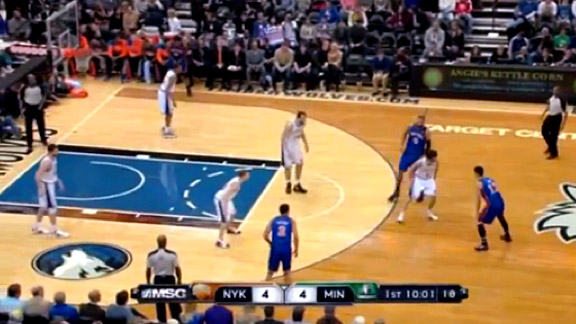 Lin’s proven weakness over the last 11 games is his inability to go left: using his left hand, driving to the left, or finishing with his left hand. Both the Minnesota Timberwolves and Sacramento Kings noticed. They would either force him away from the screen if it was set on his right, or into his screen if it was set on the left. Once the basketball went into his left hand, defenses didn’t allow him to bring it back to his right. In the image above, before Chandler has even set the screen, Ricky Rubio begins pressuring Lin to the left, and Nikola Pekovic ranges over, ready to stop any penetration.

Why it works: The key to this defense is the point guard defender. Once he initially makes Lin go left, he stays with the play to try to create a turnover. If Lin tries to bring the ball back to his right, the defender is there to poke at it.

Until Lin can make the defense pay by creating with his left hand, this is the strategy defenses should use. He faced this type of defense 35 times, scoring just 15 points on 5-of-16 shooting, with more turnovers (10) than assists (nine). Lin’s going to get better with his left hand as he gets more experience, but it won’t be an instant improvement.

What will Miami do?
The toughest challenge yet for Lin comes tonight against the Heat. Though they should just force him left, the Heat are likely to trap Lin hard every time he comes off a ball screen. That is their strategy and they rarely deviate. The traps they set will probably be more effective than Dallas’ were, based solely on personnel — Joel Anthony, Udonis Haslem, and Chris Bosh will be more effective that Dirk Nowitzki and Brendan Haywood. But more important, because the Heat regularly rely on trapping, they rotate on defense very well. The Heat allow the seventh-lowest points per possession against ball handlers in pick-and-roll situations. (They give up just 0.735 points per possession, according to Synergy Sports.)

Don’t expect Lin to have a big game. As I previously wrote, the Heat give up the most 3-point shots in the league, so look for Landry Fields, J.R. Smith, and Steve Novak to score. If the Knicks do win, Lin will need to have a lot of assists and hockey assists, with most of them leading to 3-pointers. Otherwise, expect Lin’s turnover count to rise and an L for the Knicks.

The Epicenter of NYC's Linsanity Party Scene Speaks Out