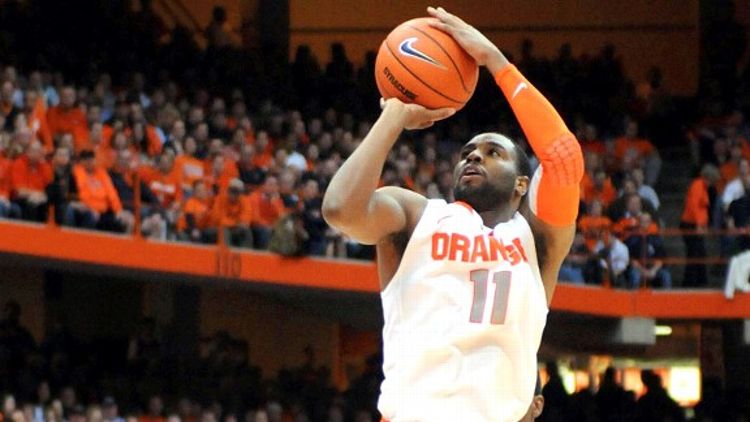 Last March, the Marquette Golden Eagles dropped a guillotine on the Syracuse Orange with a 66-62 victory in the second round of the NCAA tournament. As far as beheadings go, it was an especially ugly one.

Marquette, the winner, shot only 41 percent from the field, but feasted on 23 attempts from the free throw stripe. Syracuse turned the ball over 18 times, including the devastating bungle of an inbounds pass with 50 seconds left and the game tied. When the pools of blood curdled, the 11th-seeded Golden Eagles had knocked off their Big East rival and the East region’s three-seed. It didn’t feel like the colossal upset their respective rankings suggested — for starters, Marquette had beaten Syracuse by a nearly identical score earlier in the season — but just another incident of Big East on Big East violence.

On Saturday night, Marquette entered the Carrier Dome for another showdown with Syracuse. This meeting was less meaningful than the last, of course, but marked the first genuine test of the top-ranked Orange’s mettle in league play. (With all due respect to DePaul, Providence and Seton Hall, Syracuse’s schedule doesn’t get murderous until February.)

Two weeks ago, this game was worth circling on the calendar with a big grape-scented marker. You made late dinner reservations and agreed to attend a midnight screening of Marilyn & Me just to free up the requisite 7 p.m. window. But after cruising to a 10-0 record and a Top 10 ranking, Marquette dropped three of five games, including a humiliating loss to Georgetown where a 15-point lead in the second-half evaporated like a spritz of Old Milwaukee on hot asphalt. Still, it was a clash of two excellent teams with some revenge fantasy intrigue to liven things up.

Early on, Marquette appeared badly outclassed. Their man-to-man pressure defense was ineffective, their offense was stymied by the Syracuse zone and their tight powder-blue uniforms made a lot of their players look paunchy in the midriff.

The Orange lead the nation in steals, and plucked the ball away from Marquette on three consecutive possessions. Davante Gardner, the Golden Eagles’ 290-pound bulkster, picked up a second foul and plopped down on the bench. Darius Johnson-Odom missed a breakaway dunk. It wasn’t a prudent strategy for knocking off the nation’s no. 1 team.

Things got even worse for the Golden Eagles. Several times this season, Syracuse has gone on explosive runs where opponents are carpet-bombed by perimeter shooting and easy transition baskets. A few weeks back, North Carolina State had its top sheared off by a 23-0 run. Marquette didn’t fare much better — after a 21-1 Syracuse run, the Orange led 33-12 with three minutes remaining in the first half. During the onslaught, Brandon Triche buried his third three. Kris Joseph hit two more. Dion Waiters dunked. At the half, it looked like a laugher.

Some words should be said here about Fab Melo, the Orange’s 7-foot center who was maligned as a bust following a freshman season where he barely managed to set foot on the court. He still hasn’t become polished at traditional basketball skills like catching passes, making shots or not getting awkwardly trapped under the backboard like a deer beneath a porch, but Melo now has real utility.

He leads the team in rebounds and has become an aggressive shot-blocker who set a school record with ten snuffs against Seton Hall. As the looming giant who guards the rim in the center of Syracuse’s 2-3 zone, Melo has also become bafflingly adept at drawing charges. On three occasions against Marquette, he planted his feet, flopped convincingly and earned the call. Melo may never be a dominant center on offense, but he’s a surly, sharp-elbowed goon with an angular haircut and a penchant for bullying smaller players.  Yep, he’s Rick Mahorn. We should embrace it, as he has.

Marquette is not known as a feisty bunch of truffle-hogs without good reason. In the second half, they unspooled the blueprint for beating the Orange (assuming you avoid spotting them a 23-point lead by shooting 30 percent from the floor with 14 turnovers in the opening period). First, you make a couple three-pointers, as Jae Crowder and Johnson-Odom finally did. You attack the 2-3 zone with dribble penetration, instead of trying to pass through the thicket of long limbs. You wait for Syracuse to start bricking their perimeter jumpers, as they inevitably will, and push the tempo off the long rebounds.

If you’re Marquette, you also pray that Scoop Jardine, a player who should tattoo the term “erratic” on his forehead like a Drake groupie, will shift into self-sabotage mode. His line on Saturday was not glorious: three points on 1-of-5 shooting, with six turnovers (it was probably seven, but the scorekeepers generously blamed a botched interior pass on C.J. Fair). Coach Jim Boeheim must have believed freshman Michael Carter-Williams was too willowy in stature to handle the swarming Marquette pressure, but considering Jardine’s performance, it might have been worth giving the kid a minute or two of run.

When Marquette was clawing its way back into the game, Kris Joseph, the Orange’s ostensible star, was invisible. He finished with a tidy, effective stat line — 5 for 8 from the floor, 4-of-4 from 3-point range, 17 points — but 15 of his total were notched on open jumpers and trips to the foul line. They were not buckets snatched from the teeth of the defense. Joseph is most comfortable operating on the wing, where he can knock down open jumpers and use his pitty-pat handles to glide around onrushing foes. But against the Golden Eagle’s smaller and faster defenders, he was unwilling to muscle his way into the post to punish them for their pint-sized insolence. Blustering about heart while downplaying efficiency is something I prefer to leave to crusty flag-bearers of conventional wisdom, but in this time of Tebow, it’s fair to say that Joseph needs an injection of will-to-win passion fruit serum as an antidote for his innate Canadian passivity. He’s too talented to be deferring to Scoop in critical moments.

With five minutes left in the game, Syracuse’s lead had withered to four. Fortunately for the Orange, Waiters again swooped in to rescue his compatriots before their drifting raft plunged off the waterfall. With Johnson-Odom lining up a 3-pointer, he blocked the shot and jetted the other direction for an uncontested layup. Moments later, he found Joseph for another wide-open 3. The Golden Eagles were finished.

Syracuse, despite meager post scoring and a penchant for long lapses of ineptitude, had dispatched another foe and earned a tiny kernel of revenge. In this wild start to Big East conference play — Pitt has three losses, UConn, Louisville and Marquette now have two — the Orange strut on without a blemish.

Standing Up for Atlanta Sports Fans