Standing Up for Atlanta Sports Fans 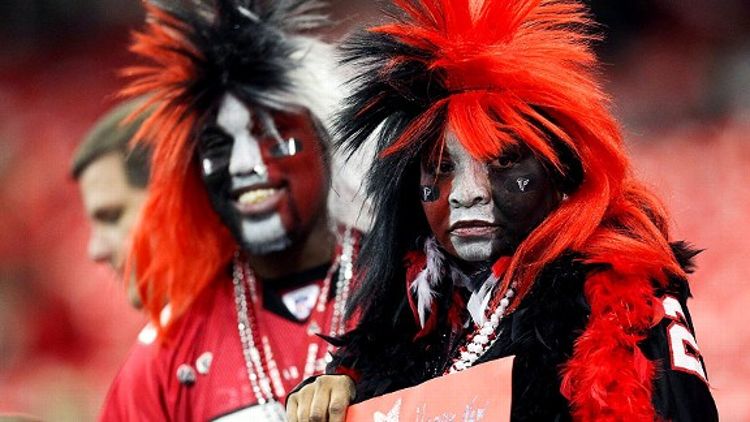 This past Friday, an article was written on the Internet. The piece, “City of Atlanta Doesn’t Deserve To Win,” states that the city’s mediocre fan base is the primary reason it is America’s worst sports city. Fighting words.

Before launching into what will not be a disrespectful bashing of this man’s beliefs, I will say I’m a little disappointed that the task of coming to my city’s defense has fallen in my lap. As of Jan. 9, 2012, I’m 18th in the “Standing Up For Atlanta Line Of Succession” hierarchy:

Seeing as that no. 19 in line is Joe Johnson, I have no choice but to address this matter, immediately.

In addressing it, however, I have no interest in arguing against the content in his text. No good will really come from a 2000-word, highly defensive, Ether-esque tongue-lashing. A better understanding of the psyche of the Atlanta sports fan will not arise from angrily writing circles around a trailblazing member of the journalistic community. If that were to happen, it would feel good (it would feel so good), but it would be a missed opportunity in finally attempting to shed some light on the peculiar nature of the Atlanta sports fan. So instead, I’m just going to tell a story.

My Sunday as a Falcons fan

I woke up, excited, because my Birds were playing the New York Giants, and there’s nothing that would make me happier than running around New York City in Falcons garb after a Giants loss. The time was 12:15 p.m., and I assumed I had a few hours to get somewhere fun for the game. Something told me to look up the game time, just in case. I was not thrilled to learn I had less than one hour.

I ran an errand and then scoured my room for my Falcons jersey. I couldn’t find it and realized I left it at a friend’s house a year ago. I’m bummed, because I love that jersey. I mean, it’s a no. 7 Michael Vick jersey. Has anything more regal ever been created? Anyway, once I got over Jerseygate, I find an old “Dirty Birds” shirt from the 1998 Super Bowl Falcons team, throw it on, smile as it compliments my 1996 Olympics hat, and walk out the door. At 1:10 p.m.

By the time I arrive at my destination, I’ve missed the entire first quarter. Not ideal. Luckily, not much has happened yet. Before I can even kick off my shoes, the Falcons are on the board with a safety. Two points. Classic Falcons playoff football. I’m smack-talking the Giants fans in the room and have sent out four texts predicting victory and calling Eli Manning unspeakable things. The image of the Matt Ryan, Tony Gonzalez, and Julio Jones meeting President Obama at the White House has just entered my head and it isn’t going anywhere.

Finally, right before the second quarter is over, the Giants score a touchdown. Not fazed. Then they come back after the half and make a field goal. I’m still OK. And then they score a touchdown on a 72-yard pass, thoroughly embarrassing our embarrassing secondary. Hakeem Nicks celebrates his touchdown with by doing the “Dirty Bird.” My feelings are hurt and I’m regretting the decision to watch this game amongst Giants fans. And then they score another touchdown. The sadness is gone and now I’m just angry. Fully understanding the reality that we won’t come back, I immediately start turning on individual Falcons. Via the popular social media site Twitter, @RembertManX is saying horrible things about Ike Taylor and Matt Ryan.

The game ends and I’m in a terrible mood. My Giants fan friends aren’t rubbing it in my face, mainly because I paid for half of brunch, but I can sense their quiet excitement. Just trying to distract myself from the game, I stick around for the first few minutes of the Steelers-Broncos matchup. As I’m about to leave, Tim Tebow comes alive. He helps his team rattle off 20 points in a single quarter and the prospect of him advancing to the next round is so exciting, I’m suddenly happy again. I have forgotten the Falcons game ever happened, I could care less about “Matty Ice,” and in all honesty, I’m sort of relieved that the anguish that comes with being a Falcons fan will be a non-factor in my life for the next seven months.

I tell this story, because it sheds some light on what it means to be an Atlanta sports fan. Based on the previously referenced article, I fulfill almost all of the requirements necessary to be considered a “lame fan.” Just going through the checklist: 1) I didn’t know what time the game was 2) I missed a quarter 3) during the game I was constantly preoccupied with other things and 4) once we lost, I got over it in 15 minutes and moved on with my life. Disgusting, isn’t it?

I, along with the millions of other Atlanta sports fans, are products of our environment, that being “The City Too Busy Too Hate.” This longtime nickname for Atlanta has been interpreted in many ways, but I think it rings especially true when it comes to the relationship between Atlanta sports and Atlanta sports fans.

We care, just not too much.

Occasionally, I see the way other cities’ fans react to sports failure and I envy their emotions. Chicago cries, New York yells, Philadelphia slurs, Boston ethnic slurs, there have been times where I wanted a Braves loss to elicit these reactions. Sometimes, I wish a Hawks first-round exit from the playoffs would make me buy a flight back to Atlanta, take the train to Philips Arena, put on a ski mask, find the players’ parking lot, and put boots on every front-left tire. I want that, but it’ll never happen. That’s just not our thing. If Bill Buckner played for the Braves, he’d probably be a city councilman and own a string of Waffle Houses outside of the perimeter and if Steve Bartman interfered with a play at Turner Field, he’d probably just get season tickets in a different section the following season. Sure, we’d ostracize them from time to time and of course, we’d never completely let them off the hook, but I wouldn’t call us bad, undeserving fans simply because we wouldn’t send them death threats and make them fear for the safety of their families. But maybe that’s just me. I say what comes off as complete indifference is simply the reality that our professional sports fortunes simply aren’t as closely tied to our life fortunes as they are in other cities.

I say all of this, fully aware that we almost changed our ways once, during the Vick years. Most people cite stadium attendance as the sole indicator of fan support, but as a resident of the city during that time, never before had I seen the city that excited about being entertained from week to week. Just to put it in some perspective, some church services were ending early so people could get home for the Vick show. This is the Bible Belt we’re talking about, not the heathen-filled North. But even at our most excited as a city, even if the Falcons didn’t win, Vick was certain to give us something exhilarating and during that period of time, that was enough. Other cities thought we were cool because we had Vick and we finally had an athlete to brag about. It became clear during these years that the priorities that came with being an Atlanta sports fan were 1) to be entertained and win 2) to be entertained and not win 3) to not be entertained but win 4) to not be entertained or win. Some cities would be appalled at this order. In Atlanta, though, it’s just the way it is.

Sports, like other aspects of culture that can be taken very, very seriously, have always been about entertainment for the average Atlantan. Most high-brow music critics, for example, don’t see Atlanta as the mecca of thought-provoking, important music. Yes, there are definitely the exceptions, but when it comes down to it, the city produces individuals who entertain. They entertain, and we turn away slightly in shame for five seconds, and then give in and start screaming “WAKA FLOCKA WAKA FLOCKA GUCCI GUCCI GUCCI” at the top of our lungs. That’s Atlanta.

This importance of entertainment over success isn’t a good or bad thing, it’s just the reality of where the city’s priorities are. Are we attending our team’s games at the same rate as other cities? No. Are we losing sleep over the successes and failures of our franchises? No. Some may call us fair-weather fans, but I think we’ve been pretty consistent for decades in our acceptance to be entertained first and win second. I mean, if you think about the Holy Trinity of Atlanta sports, it’s Hank Aaron, Dominique Wilkins, and Michael Vick. None of these guys are winners, but one guy you could count on hitting a home run, one you could count on throwing down a tomahawk jam, and the third you could count on scrambling for 30-plus yards in a game. Wins are great, but I wouldn’t trade any of those losers for the world.

So, despite the hideous fashion the Falcons went out in Sunday, come next year we will have forgiven, forgotten and will be delusionally ready for Matt Ryan to take us to the Super Bowl. Same is true for the Braves team that failed to make the playoffs in a shameful fashion, as is it currently for this season’s semi-electrifying Atlanta Hawks team that I’ve almost convinced myself can actually come out of the East and win the title. Down at the bottom of the map, we live by a different creed when it comes to sports. We don’t know a lot about winning, but we’re pretty fantastic at being good-spirited, slightly delusional losers. For that fact alone, I wouldn’t trade my sports city for the world.

Previously by Rembert Browne:
Where Has Ivan Johnson Been All Our Lives?
Rembert Explains the ’80s: Bosom Buddies
Grading the Celebrity Engagements
Return of T-Mac: How McGrady Cooled the Heat