How Local NBA Broadcasts Are Coping With Record-Breaking Blowout Losses 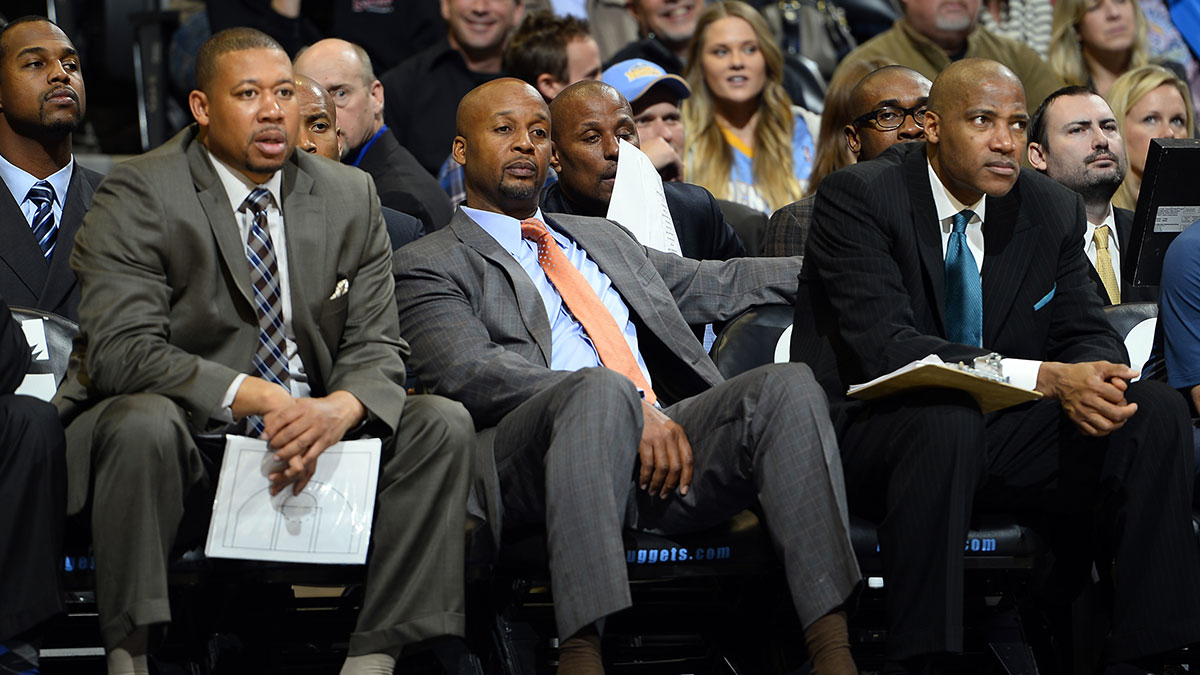 It was an incredible week for awful games. In three consecutive nights from Thursday to Saturday, we saw1 the three worst games of the season by margin of defeat, with losses by 53, 48, and 33 points already in the books. Records were broken, shoulders were slumped.

This level of futility weighs on fans, sure, but fans can walk away from an awful game at any point. Team broadcasters, on the other hand, are obligated to narrate every ensuing transgression of the sport until the final buzzer sounds. That’s enough to drive anyone crazy. Here’s how several unlucky team announcers coped over the week.

It’s amazing to think that Atlanta was only down 24-21 with three minutes left in the first quarter — and that was with the Cavs already going 6-for-6 from beyond the arc. With each subsequent 3, the exasperated Hawks announcers continued to talk themselves into this nightmare ending. “I suspect they’ll cool off at some point!” Or, “You just gotta keep playing! They’re not going to shoot like this for the rest of the game!”

The Cavs closed the final three minutes of the first quarter on a 17-4 run. At the buzzer, Joe Harris dropped a bomb off the dribble, breaking an NBA record for most consecutive 3s made in a quarter without missing. Bob Rathbun shouted, “Nine for nine! This is ridiculous!” But his voice was obscured by Dominique Wilkins bellowing, “Ohh!” I was almost positive, on my first five replays, that Rathbun was saying, “For god’s sake — this is ridiculous!”

Rathbun unsheathed his best zinger of the night in the second quarter: “It looks like a Big 12 football score, 62 to 27, but it’s the NBA.”

In the final minutes of the game, Rathbun offered some consolation to Hawks fans, and a portent to the rest of the league: “Frustrating night. You know the Cavaliers have the ability, with the new Big Three, to go off offensively, but why did it have to be tonight? And why did it have to be against Atlanta?” Rathbun’s voice modulation was set to “What’s the deal with airline food?” to mask the hurt. 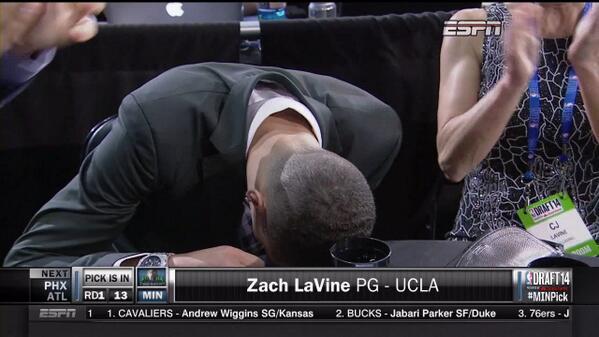 Despite suffering the second-worst loss of the season, there was no “Woe is us!” emoting from Dave Benz and Jim Petersen. The closest thing to unintentional comedy the duo gave viewers was in the third quarter, when Shabazz Muhammad hit a jumper off a curl to make the score 110-69. Benz noted that Muhammad “quiets [the crowd] a little bit, but it’s still a 41-point advantage for New Orleans.”

Instead, the time was spent talking about the wonder of Andrew Wiggins, who set a career high in points on another night of efficient shooting. The broadcast allowed Petersen to flex his knowledge of other teams — he exalted the Rockets defense and talking about historical precedents to the Derrick Rose debacle. He shared an anecdote about Wolves assistant coach Sam Mitchell, who regularly had locker-room tirades after losing efforts as a player, and would surely have one after this loss. As Zach Lowe has noted, you really do learn something new in every Wolves broadcast. 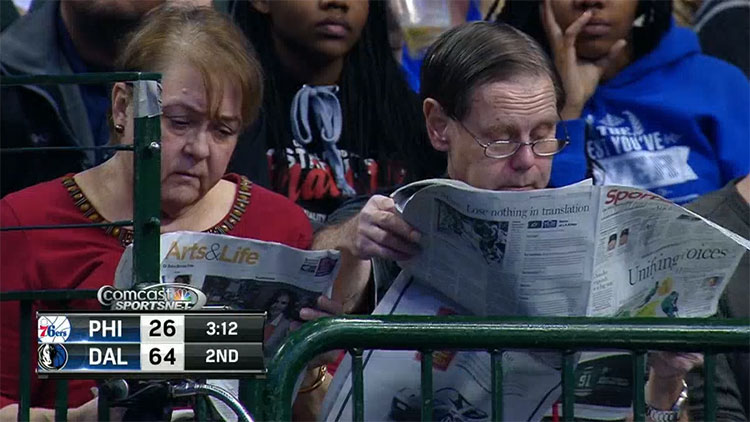 With the score at 64-26, the Sixers’ broadcast went to a shot of a couple in the American Airlines Center reading newspapers. The man was reading the sports section; the woman, the arts and life section. “Really?” Sixers play-by-play man Marc Zumoff asked. “What is this, Sunday morning at home?” Color commentator Malik Rose laughed, then sighed. “Oh, Dallas.”

Maybe the best way to show how the Sixers’ very specific, very painful long-term plan has warped the broadcast’s expectations of a professional basketball team is this exchange:

Rose: Yeah, I mean, like I said, the Sixers are probably not going to win the game, but you don’t want the lead to build. A small victory would be losing by 25, as opposed to, you know, 50, or whatever. You’ve got to look for the silver lining in everything.

“Best thing about this one for the Sixers? It’s over,” Zumoff said, with minimal affectation, to cap the night. The team he’s covered for more than 20 years suffered its worst loss since he started working for them,2 yet there wasn’t any outrage or hurt in his voice. There’s no sense in allowing yourself to be overridden like that. There are about nine-tenths of the season left to trudge through. Maybe a sportscaster’s job is to stay in the moment, but when individual moments hold such little currency to a team like the Sixers, announcers have to adjust their schemes, too.

Not four minutes had elapsed in the third quarter of last Wednesday’s Blazers-Nuggets game, yet it appeared as though the Nuggets announcers were already giving up. They started talking about duck hunting. They talked about the point in the season that’s best for duck hunting and when the ducks begin to descend. They mentioned how Wednesday would’ve been a good day for a hunt — the intonation in their voices like an inmate detailing the perfect last meal before the date with the electric chair. It was the best tangent I’ve heard this season.

Wait, it gets better. Later on, this happened: 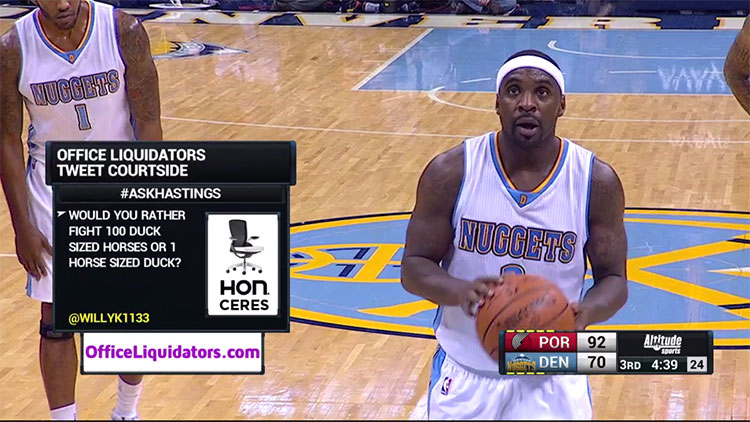 Let the record show that Scott Hastings would rather fight 100 duck-size horses. Let us also pray for the Nuggets announcers.