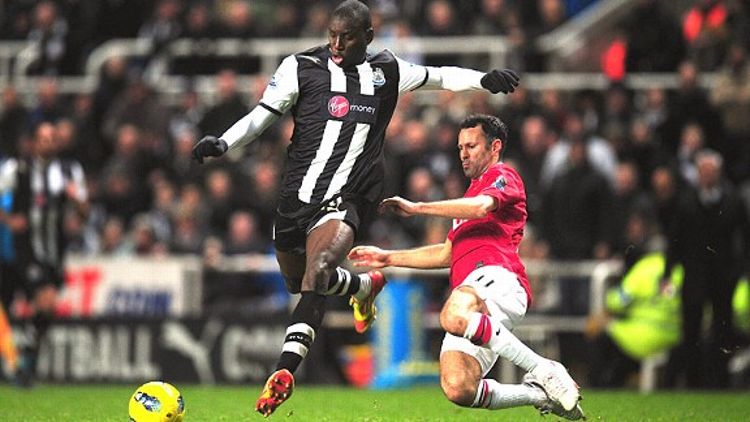 Wayne Rooney was back from Siberia (AKA: the doghouse), Rio Ferdinand was back from the couch (AKA: watching darts), David De Gea was banished to the bench and Newcastle was primed for a winter-long slump. What could possibly go wrong for Sir Alex Ferguson and Manchester United on Wednesday? Oh, pretty much everything.

Or, to quote a tweet from Newcastle striker Sammy Ameobi, here’s what went wrong: “BA…HUH! What did he sign for? Absolutely Nothing!”

Ameobi, younger brother of Newcastle cult figure Shola Ameobi, was referring to Demba Ba, the Senegalese goal-machine who scored yesterday against United. The strike was a thing of beauty; the product of some textbook “route one” football (meaning a pass, launched upfield in the air, toward the opposition goal). It’s a style of play that is normally rather maligned, but Ba’s perfectly taken, 33rd-minute, first-time volley, controlled after a perfect headed flick from the elder Ameobi, made it look as sumptuous as anything you’d see take place in Barcelona or Milan.

Around this time last year, Newcastle sold Andy Carroll to Liverpool for a fee of 35 million pounds. Carroll was supposed to be the Northeast club’s future; a local legend in the making, with a bad boy ponytail and broad shoulders to carry the hopes and dreams of that passionately supported club.

To fill void, if only on the teamsheet if not in the hearts of fans, Newcastle signed Ba at the beginning of the 2011-12 season from the recently relegated West Ham. In previous years, Ba had seen two other transfers (to Stoke and German side Stuttgart) fall apart due to health concerns. But Newcastle, seeing a bargain (hence the “absolutely nothing”), took a gamble.

To say it has paid off would be like saying sometimes Sergio Busquets makes the most of a foul. Ba is responsible for almost half of the club’s league goals this season; an unholy combination power running back and ballet dancer, able to fend off, plow through and dance around how ever many defenders get in his way.

In this week’s Reducer column, I moaned about a lot of teams failing to take advantage of the opportunities. I write this now wearing an “I’M WITH STUPID” T-shirt, with an arrow pointing up at my face. Newcastle has taken advantage of opportunities that weren’t even there. Every time they’ve been counted out, every time they’re supposed to regress to their fair-to-middling mean, they’ve ferociously fought back and shocked fans, neutrals, haters and skeptics alike.

They might not make the Europa League, they might not hold on to Ba, Cheick Tiote or Yohan Cabaye in future transfer windows and, hell, who knows, one of these days the players might realize that manager Alan Pardew is about as inspiring as a pamphlet for elective dental surgery. None of that matters. Beating Manchester United, at home, in front of 40,000 plus screaming Geordies and a shocked global audience, produced a night to remember and a season fans will never forget.

Some other notes on mid-week action:

Previously by Chris Ryan:
Rankonia: The Triangle Power Rankings
The Reducer: Week 19, Do the Collapse
The Lion in Nuclear Winter: The Comedy of Kobe Bryant