Decoding the Astros’ Bo Porter Firing, and Figuring Out the Future in Houston 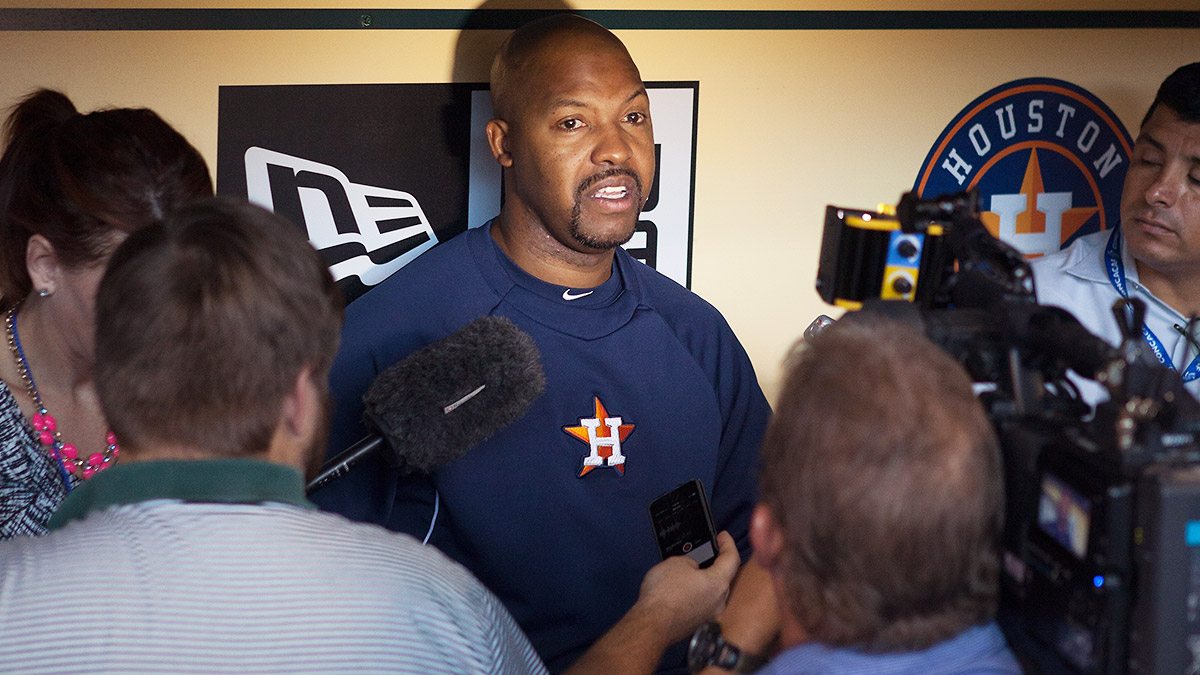 In an alternate timeline in which the stories we told about sports teams were shaped solely by how they fared on the field, the Astros’ 2014 season might be considered a modest success. Coming off three consecutive years as the worst team in baseball, the Astros are 59-79, peering down pityingly at three clubs with inferior records. Mercurial, contact-challenged hitter Chris Carter has clicked, outslugging and outhomering every other hitter in baseball since the start of July. Offseason trade acquisition Dexter Fowler has proven he can hit at sea level. Rookie George Springer has played like an All-Star. Jose Altuve actually was one. Dallas Keuchel, who claimed a rotation slot during the last week of spring training, and Collin McHugh, who didn’t win one until a month later, have been two of the season’s most pleasantly surprising starters.

Yet despite those positive player bullet points, the national conversation about the Astros’ season has largely been driven by “sources.” Sources leaked innocuous but embarrassing notes about trade talks from the team’s internal information system. Sources whispered about miserly extension offers to Springer and the results of Brady Aiken’s MRI. Sources complained about supposedly pampered minor league pitcher (and 2013 no. 1 pick) Mark Appel’s presence in the clubhouse and in the bullpen before a game in late July, and accused the Astros of dwelling on statistics and small edges at the expense of personal relationships. And most recently, sources hinted at increasing tension between general manager Jeff Luhnow and manager Bo Porter.

Those hints proved prescient. Luhnow fired Porter on Monday and replaced him with interim manager Tom Lawless, less than two years after hiring Porter to shepherd a terrible team to a more respectable place in the standings. It’s a move the front office believes will make the Astros more likely to compete in the coming years. It’s also a move that’s calculated to silence some of the sources and put the focus back on the field. And, finally, it’s a move that reveals one area in which the Astros (and rival teams) still don’t have decisions down to a science.

Without considering context, the Astros’ play from 2013 to 2014 might be evidence enough that Porter deserves to be back in baseball’s breadline. Porter’s record as Astros skipper was 110-190, but managers and pitchers are the only uniformed personnel whose performances are unfairly conflated with their clubs’. Porter’s record is really the Astros’ as a group — or Luhnow’s, if you want to pin it all on one person. Luhnow admitted as much, saying, “When you look at the sum total of wins and losses over the last two years, that’s on me. That isn’t on Bo.” Luhnow didn’t expect to contend as soon as this season, and he didn’t jettison Porter because the team played down to expectations.

Nor did Porter get a pink slip because he wasn’t progressive enough — that’s another overly simplistic explanation that stems from canards about the cold, calculating, somewhere-on-the-spectrum Astros. This wasn’t an outtake from the hyper-embellished Moneyball movie, with Luhnow reviving the role of Billy Beane and Porter playing the hidebound Art Howe. Porter was, if not the perfect student of sabermetrics, at least receptive enough to new ideas to work with a GM like Luhnow and to implement some of the recommendations coming out of the Nerd Cave. The Astros lead the league in defensive shifts by a wide margin and they’ve been one of the best at putting productive hitters in the second lineup slot, a sign of enlightened lineup construction.

At its core, the decision came down to the soft factors that Luhnow spent so much time talking about at Saber Seminar two weekends before the firing. It’s important for any front office and field staff to present a unified front, and despite Porter’s charisma, he wasn’t the leader or the communicator the Astros (rightly or wrongly) initially believed him to be.

According to a source who was close to the situation (what’s one more source in a season full of them?), Porter bristled at perceived challenges to his authority and resented situations where his input wasn’t sought, interfering with and contradicting his coaches in order to ensure his players remained loyal primarily to him. He resented Appel’s appearance at Minute Maid Park because he hadn’t been notified the pitcher would be throwing in front of major league staff, including pitching coach Brent Strom, whose first allegiance (Porter feared) was to Luhnow, who hired him. Porter was an engaging speaker and a skillful persuader, but he wasn’t always equally willing to change his own mind, occasionally adopting more of a “Bo knows” mentality. And when he wasn’t happy, he was willing to say so to media members (if not to owner Jim Crane), which isn’t the kind of communication Luhnow was looking for. He also wasn’t looking for the occasional lapses in clubhouse relations, or the Scout leader–esque motivational tactics that turned everything into a T-shirt or slogan.

Some of the dysfunction may have resulted from a poor fit between personalities, for which both parties could potentially bear some blame. And the first-time skipper was asked to do something difficult: Lose more than any other major league manager. Even though the transparency of Houston’s plan took some heat off Porter, the lack of wins didn’t sit well with his competitive nature. Porter earned praise for his commitment to winning, but he may have been too committed to winning to take over a team that — despite Luhnow’s 2012 talk about not being patient in assembling a contending team — was willing to wait years to start stringing those victories together.

Although Porter was warned that even a break-even season might be far away, he seemed to believe he could bring it significantly closer by himself. “Porter looked at all 162 Astros games last season,” wrote the Houston Chronicle’s Jerome Solomon shortly after Porter’s first spring training began. “He believes there were 35-40 games that if the Astros had won one of what he describes as ‘break points’ of a contest, the outcomes could have been different.” Porter went on to list the intangibles that could enable a player to beat his projection, concluding that “the majority of the time those are the determining factor.” In his first season at the helm, though, the Astros grew even worse. Rather than question either the impact of intangibles or his own ability to enhance them, Porter held Luhnow responsible for depriving him of players with the potential to be taught, suggested the source.

The end of Porter’s tenure probably won’t produce any lasting problems for his former front-office colleagues. A managerial firing reminds players where the power lies, and Porter wasn’t so well-liked that his dismissal could lead to lasting resentment. By firing Porter now, so soon after the reports of dissension surfaced, Luhnow gets first crack at potential replacements, gives Porter a good chance to catch on somewhere else, and spares his players the prospect of answering constant questions about Porter down the stretch.

The real problem is that the Astros now have to hire a successor. And for all the algorithms that produce projections for potential draftees or purport to tell the team the perfect time to promote a player from the minors, hiring a human who can keep a clubhouse close and a GM closer is an exercise in uncertainty.

Luhnow took well more than a month to pick Porter after firing Brad Mills, whom he’d inherited from predecessor Ed Wade, in August 2012. At the time, the Houston Chronicle’s Zachary Levine wrote that Porter was “roundly praised for his leadership,” the very quality Houston came to believe he lacked. And it didn’t take long for relationships to sour: “From the beginning, there was a disconnect,” MLB.com columnist Richard Justice wrote.

So what will be different about this search? Houston’s brain trust isn’t as green as it was the first time around, and Luhnow’s inner circle includes more advisers with an inside-baseball background who can pump contacts for unbiased opinions about each candidate’s prior performance. This time, Crane said, the Astros will “be a little more cautious.” In other words, they won’t assume that a candidate who says the right things in an interview will follow through on those things in practice. Last time, the four reported finalists for the job were all rookies. First-time managers have their appeal: As a group, they’re likely less set in their ways and less resistant to front-office input. However, they’re also unproven, and thus unpredictable.

Teams tend to swing back and forth between extremes on the managerial spectrum: A laid-back, easygoing guy follows someone fiery; a players’ manager succeeds a disciplinarian; a mentor type gives way to one who’s good with veterans. This time, Houston will try to find a hybrid who combines the best of Mills and Porter and lacks their weaknesses — an experienced manager with an open mind, and a strong voice who doesn’t want to drown others out. If there’s a formula, the Astros will find it. For now, though, this is a problem without a foolproof Process.

About Last Night: You've Been Kershaw'd