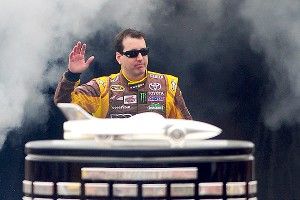 The 2012 NASCAR season is officially under way with the running of the Bud Shootout earlier this month and the Gatorade Duels on Thursday night, which set the field for the 54th running of the Daytona 500, an event considered to be the most prestigious race on the NASCAR Cup circuit. Two drivers looking to take checkered flags this year are brothers from Las Vegas. Kurt and Kyle Busch are two of the most talented drivers — with two of the worst attitudes. These are guys who separately made their way into the prestigious Cup series only to piss off every single person in the series.

It all began with older brother Kurt.

Kurt entered the NASCAR Cup series in 2001 following a successful career in the NASCAR Craftsman Truck Series driving for Jack Roush, one of the most respected car owners in the garage. He entered the sport with a chip on his shoulder. The guy was 130 pounds soaking wet, but ran his mouth as if he were 10 feet tall and bulletproof. He referred to a group of respected veteran drivers, some with championships under their belts, as “decrepit old has-beens” because he got caught up in a wreck while running at the back of the field. He famously traded paint during several races with old-school driver Jimmy Spencer, who I’m sure to Kurt’s surprise punched him in the face following a race at Michigan International Speedway. Kurt won poles and races and even proved himself to the sport by winning the 2004 Cup Championship. Unfortunately, the elder Busch’s attitude never improved. Kurt departed his ride with Roush and joined yet another top-notch racing team driving for owner Roger Penske. Kurt took over the seat in the no. 2 Miller Lite Dodge, which had been occupied by veteran driver and past champion Rusty Wallace. Nothing changed. Though Kurt took some checkered flags and made the Chase, his mouth always seemed to get the best of him. He moved from the no. 2 Miller Lite Dodge into the no. 22 Pennzoil/Shell race car. The story never changed. Wins, poles, and attitude. He began a terrible habit of unleashing a barrage of profanity-laced tirades toward his crew chief and pit crew while on the track. The final straw came following a wreck during the final race of the 2011 season at Homestead when one of the most respected pit reporters in all of NASCAR, Dr. Jerry Punch, went to interview Busch and ended up on the receiving end of Kurt’s curse-filled shit attitude. Busch walked away, unaware that the whole incident was caught on-camera and went viral on YouTube. During the offseason, Penske announced that Kurt and Penske Racing had amicably decided to part ways. Anyone who knows anything about the sport knows a driver doesn’t leave at that time of year without a ride lined up. With Busch’s ride becoming available, good guy AJ Allmendinger was announced as the driver of the no. 22 Pennzoil/Shell Dodge with Kurt announcing he will be the driver of the no. 51 car owned by Phoenix Racing, with limited sponsorship by TAG Heuer. To say this is a step down would be an understatement. Only time will tell if Kurt Busch found any humility during the offseason, or if he will find it driving for an undesirable and underfunded race team.

Kyle made his way into the Craftsman Truck Series and the Nationwide Series at the young age of 18, showing talent that in turn allowed him into the Cup series in 2005 wheeling the no. 5 Kellogg’s Chevrolet for Hendrick Motorsports, a ride previously driven by two-time Cup champion and well-respected driver Terry Labonte. Kyle won his first Cup race at California Speedway and was also named 2005’s Rookie of the Year. I attend the NASCAR race at Texas Motor Speedway each year, and I remember being there watching driver introductions; the fans absolutely booed the shit out of the younger Busch during his rookie season. I remember thinking how tacky it was for fans to boo a guy just because his brother is an asshole. Apparently, the fans there knew something I did not.

Kyle’s actions since that day proved to be anything but gentlemanly. During a race at Texas in 2007, Kyle was caught up in a wreck, and though his race car was repairable he chose to leave the track while his team feverishly got his car ready to go back out on the track. It just so happened that Dale Earnhardt Jr. was out of the race with a blown engine and chose to stay at the track. A member of Hendrick Motorsports approached Dale Jr., who ended up finishing the race in the no. 5 Chevrolet. Kyle left Hendrick Motorsports and moved on to the no. 18 Interstate Batteries Chevrolet for Joe Gibbs racing, a race car once driven by 2000 Cup Champion Bobby Labonte.

Kyle is known for driving in all the of NASCAR series with his reputation following him around track to track. One driver/car owner he has consistently had issues with is Kevin Harvick. Kevin drives for Richard Childress Racing and owns teams in the Craftsman Truck Series and the Nationwide Series. Harvick has had physical encounters with Busch, most of which are with his race car post-race, causing both drivers to be put on probation multiple times. Things came to a head during the 2011 season, when car owner Richard Childress decided he’d had enough of Kyle’s on-track actions during a truck race at Kansas Motor Speedway following an on-track tangle with RCR driver Joey Coulter. Busch bumped the truck of Coulter during the cool-down lap. Following the race, it was reported the Childress punched Kyle in the face multiple times until the fight was broken up. I’m not condoning fighting (nor did I not find it hilarious), but the common denominator in all of these moments is Kyle. A few other Kyle Busch moments include him being ticketed for driving 128 mph in a 45-mph zone while test-driving a Lexus in a residential area, to smashing a rare custom-made Les Paul guitar/trophy in Victory Lane. But none of those moments can top him wrecking Ron Hornaday under caution at Texas Motor Speedway in November of 2011 during a Camping World Truck Series race, sending Hornaday’s truck headfirst into the outside wall. Finally, NASCAR took action. Kyle was fined $50,000 and parked for the Cup race at Texas.

There is no telling what kind of trouble the Busch brothers are going to get themselves into during the 2012 NASCAR season. I’ll tune in as I always do, and probably curse at them from the comforts of my home. There is no doubt in my mind that Kurt and Kyle Busch are talented race car drivers, but I think everyone has had just about enough of their disrespect. For some reason, every sport likes a bad guy or a villain, but these two really need to wake up. They’re two guys who possess a talent for driving, yet are two of the least talented human beings when it comes to their behavior. But just like all race fans, I’m beyond thrilled for the green flag to drop at Daytona. I’ll hold my breath during the wrecks, cheer for my favorites, and hope to see one of the good ones cross the finish line first.