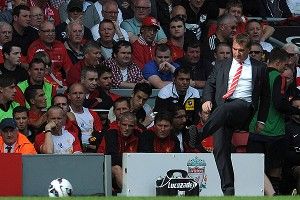 Free at last, free at last, thanks to Tottenham, Clint Dempsey is free at last. The Texan’s brave football strike came to a glorious end last Friday after Fulham agreed to his liberation. But while Americans everywhere breathed a sigh of relief, the Deadline Day news was quickly subsumed by the continued disintegration of Liverpool. In this week’s pod, Michael and Roger review the EPL’s biggest comings and goings, consider Arsenal’s impressive victory over Liverpool at Anfield, and salute the Premier League’s newest powerhouse, West Bromwich Albion.

Before things devolve into complete idle chatter, the Blazered Ones are once again joined by Sir Ian Darke, live from his automobile, as he single-handedly navigates the hazardous roadways of England in order to watch his beloved Portsmouth play football. “You show me a guy who in this game doesn’t support a team,” says Darke, “and I’ll show you a cold fish.” Wise words from a wiser man.