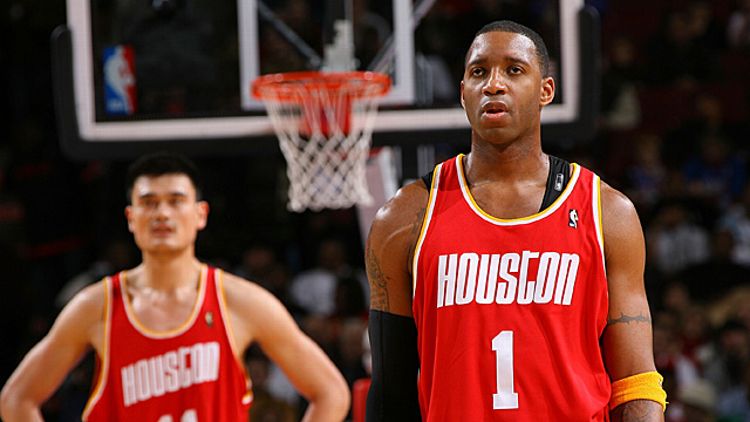 Today, Tracy McGrady announced his retirement from the NBA. During this past season’s NBA Finals, Grantland’s Jonathan Abrams spent some time with McGrady, who was a peripheral member of the Spurs team that was taking on the Heat. Little did we know, that was the last we would see of T-Mac in an NBA uniform. Here’s an excerpt from Abrams’s piece, regarding McGrady’s up-and-down days as a Houston Rocket:

Jeff Van Gundy told McGrady that the Rockets would go only as far as he could take them.

That destination appeared to be out of the first round, at least, when the Rockets and Mavericks squared off in the 2005 playoffs. The Rockets won the first two games of the series in Dallas, highlighted by T-Mac’s memorable posterization of Shawn Bradley. “I was sitting right there,” said Carroll Dawson, Houston’s general manager, at the time. “Tracy came down on him like he was riding a horse.”

But the Rockets fumbled the middle three games away to Dallas before claiming the sixth and establishing a win-or-go-home seventh game. Dallas clubbed Houston in that game, 116-76.

McGrady averaged 30.7 points, his fourth consecutive series of 30 points or more. “He couldn’t have played any better,” said Barry, then a teammate of McGrady’s in Houston. “And every single guy on my team just felt awful for him because he put on an unbelievable performance, every single game, guarding Dirk Nowitzki.”

Dawson had promised owner Leslie Alexander that he would deliver a championship-caliber team before he retired. The moment finally seemed at hand as Yao posted averages of 21.4 points and 7.7 rebounds in the series. But the following season, McGrady began deferring to the ascendant Chinese big man as he began a long battle with back spasms. “Yao was a big part of our team, but he wasn’t a dominating guy like Shaq, a 25-and-15, a 25-and-14 guy,” McGrady said. “I don’t even think he averaged 20 points, so it was still a lot for me [to handle] because I’ve got to get him the ball.” Houston suffered another first-round Game 7 loss in 2007, this time to the Utah Jazz. They collapsed again after taking the first two games of the series. Afterward, Yao said he should shoulder the criticism and did not rebound to his capabilities. “That was one that really could have gone either way,” said Matt Harpring, who spent much of the series guarding McGrady. “It was just a couple of bounces here and there. I saw and heard Tracy after the game and saw that he was emotional. He should definitely know that he couldn’t have done anything more to have helped his team win.” McGrady went down fighting. He had 29 points, 13 assists, and five rebounds in the 103-99 Game 7 loss.

“This is why I understand why great players leave good situations and try to find great situations,” Van Gundy said. “Because the media has such an impact on your perception, and they have a tunnel vision for [how] championships equate greatness instead of situations — who you play with, who you play against — hav[ing] a big impact on how much you win. And this is where I think McGrady’s being short-changed a little bit.”