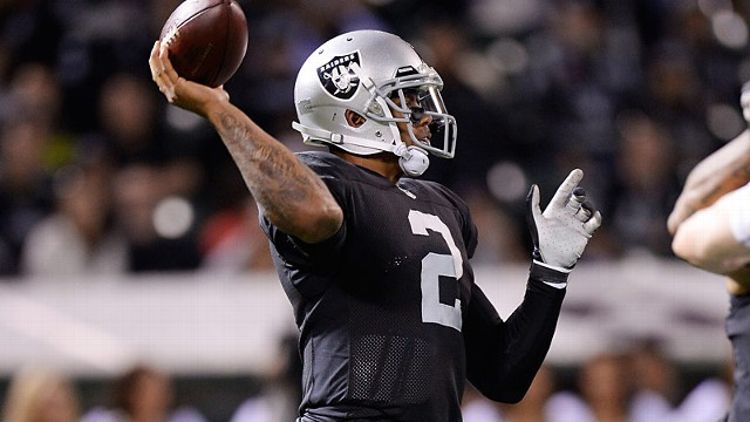 It all got ugly fast in Oakland on Friday night. Enthusiastic boos aren’t typically a part of the preseason, but by the midway point of the second quarter, they came from everywhere. Matt Flynn had just thrown his second interception of the first half, bringing his line on the night to a paltry 3-for-6 for a total of 19 yards. The jeering had followed a few of Flynn’s five drives — which had resulted in just two first downs — but after Isaiah Frey’s interception, the boos turned to chants. It was hard to make out the exact words, but the gist was clear: We want Pryor.

There’s really no misconstruing the Raiders’ situation at the moment, even for the most optimistic Black Hole dwellers. General manager Reggie McKenzie took over a roster in worse financial shape than any in the league, and his tenure at the helm of the organization in the post–Al Davis world has mostly consisted of clearing out the massive veteran deals handed down under the last regime. It’s a task that’s now all but over, but it has left this current Raiders team with less talent than just about any other in the league. That was before one of Oakland’s two or three best players — offensive tackle Jared Veldheer — went down for the season.

This is a stopgap year in Oakland, marked by short-term contracts and an eye toward the future. The Raiders aren’t going to win much this season, and in some way, that’s by design. The crowd’s calls for Pryor seemed to come with that in mind. If we know this is going to be bad, let’s at least make it entertaining. Flynn was never going to be any sort of answer, and from the look of it, a season with him at quarterback would maintain a consistent level of awful that would surprise or intrigue no one. It was in the final minute of the first half of a preseason game, one that the Bears led 27-0, but on Pryor’s second drive, he managed as many first downs as Flynn had in a quarter and a half. More importantly, he looked exciting doing it.

The third quarter was about what we could expect from Pryor — a few flashes mixed with some spectacular disasters. Those flashes involved two touchdowns, though, including a 25-yard scramble down the right sideline, and by the time the quarter was over, it started to seem like Pryor had enough to at least continue a conversation. And now, it looks like he has. Pryor will start for the Raiders in their preseason finale against the Seahawks on Friday, as Flynn sits out with what’s being described as a “sore arm.” I’m guessing that arm is about as sore as Dennis Allen wants it to be.

It wouldn’t be at all surprising to see Pryor go into Seattle, throw together a flaming wreck of a first quarter, and end up back on the bench. But at this point, I don’t know if it should matter. The Raiders have nothing to lose. The only good argument for why they’d hold Pryor back is the very slim chance that he’d be too good, which, in this case, means that he’d be able to scrape together a few wins (like, five), thanks to a few crazy plays, and Oakland may lose out on one of the first two picks in the draft (which are supposed to yield either Jadeveon Clowney or Teddy Bridgewater). With Matt Flynn, this is likely a 3-13 team that would provide no casual NFL fan with a reason to watch, ever. With Pryor, it’s probably still a 3-13 team, but at least there’s the possibility for a phrase like “Did you see what Terrelle Pryor did today?” And that’s enough for me.