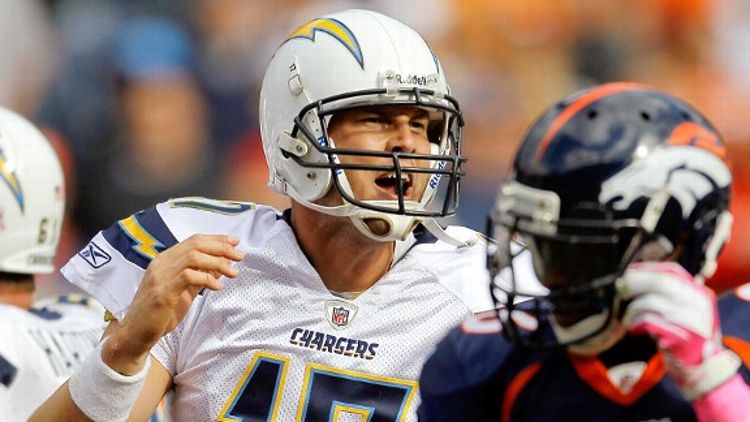 The most disturbing thing about Rivers’ performance against the Jets on Sunday wasn’t the fact that he only completed 50 percent of his passes or threw two picks (including a back-breaker that got repo’d on Revis Island). It was those lingering sideline shots of Rivers. Was he glaring across the field making Nature Boy Ric Flair ““woos” at Rex Ryan? Nope. He just stared out into space.

Now, there might be several reasons for Rivers’ poor production of late (he didn’t look too hot against the Denver Broncos earlier this month, either). Sunday’s game was a typical West Coast team playing an early game on the East Coast. New son, Peter Rivers, keeping him and his wife (Tiffany!) up all night. Whatever. None of that explains his demeanor, and I have something to say about it. So earmuff it for me, Peter Rivers (actually all of the Rivers kids, for that matter).

Philip Rivers is an asshole. It’s what makes him special. If Peyton Manning plays football like he’s overseeing an assembly line and his brother Eli plays like he’s being sent to detention, Philip Rivers plays like he’s about to start a fight at last call, and there’s nowhere else on earth he’d rather be. Remember when he tormented Jay Cutler?

Dick move? For sure. But doesn’t that look LIKE FUN? Doesn’t it look like he’s 14 and he’s talking reckless to some kid from another neighborhood? Isn’t that kind of animosity exactly what makes football so electric?

Philip Rivers is probably in a slump, he’s probably not sleeping very well, and there’s been speculation that he might even be carrying an injury. Those things can all be corrected. I just hope that he remembers that part of the fun of being Philip Rivers is going all PHILIP RIVERS from time to time.