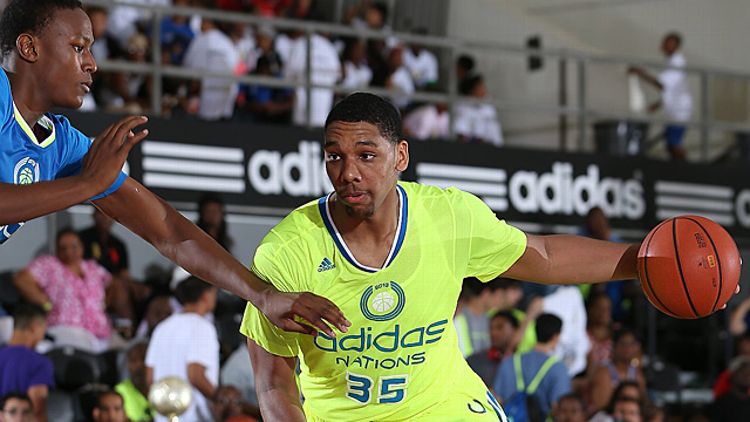 As we filed into the stands of the Hall of Champions Gym in Long Beach, California, for the first game of the Adidas Nations Global Championships on Monday, I overheard a brief exchange between an amateur scout and a man who wandered in, sure of a spectacle, but unsure of what he was looking at:

“Are these guys NBA players?”

He spoke the truth, even if that wasn’t what we wanted to hear at the moment. Adidas Nations is a tournament that brings some of the best high school basketball players from around the world to southern California. It’s part of the high school showcase circuit that serves to prop these teenagers up as saviors before they’re legally able to vote.

It’s crazy how much stock is put in these still-developing bodies and identities when so much can change so quickly. At last year’s Adidas Nations, minor celebrity Shabazz Muhammad, the no. 1 recruit in the nation, showed up and was promptly swarmed by media clawing for interview requests. His path to NBA stardom seemed so assured at the time. After a tumultuous season at UCLA, he was drafted by the Timberwolves, but he still has some issues.

Whether you’re a jaded realist or a wide-eyed enthusiast, the act of discovering what’s next is universally thrilling, and that’s ultimately what Adidas Nations provides. Here are a few takeaways from this year’s championship night.

1. Some players just give off a vibe

As the announcer ran through the starting lineups for the third-place game, my eyes were fixated on the impossibly thin 7-footer with the mop top on the 2015 squad. In the first two minutes, this kid managed to flash some fluidity, his defensive potential, and a soft touch. I didn’t need to see much more; I was all-in. Turns out he was Stephen Zimmerman of Bishop Gorman High School in Nevada (Shabazz’s alma mater), who most claim is the top recruit of his 2015 class. I’m not sure when he hit his growth spurt, but he doesn’t play as though he was tall his entire life. He runs the floor extremely well, can shoot from distance, is completely comfortable handling the ball, and made some nice passes. Like Anthony Davis, Cody Zeller, and Kelly Olynyk before him, his game seems informed by a guard’s sensibility. If he can continue to channel those skills as his body develops, he could be a monster in his next two years of high school ball.

Zimmerman wasn’t the only no. 1 recruit playing in the final night of the championship. Jahlil Okafor, who was an absolute beast at the FIBA U19 Tournament in early July, was by far the most imposing figure in the competition. There is no way someone who doesn’t turn 18 for another four months should be able to carry his 6-foot-11, 280-pound frame the way he does. Obviously, much of his damage was done pummeling guys down low, but Okafor also showed off a solid 17-foot jumper, and took the ball coast-to-coast on one possession. He isn’t quite Godzilla in a tutu, a designation I’ve reserved exclusively for DeMarcus Cousins, but he’s far from a plodding stiff.

2. Team Africa is for the children

The championship game featured an extremely talented and extremely hyped crop of players from the 2014 class, and the level of competition was much, much higher than the third-place game between Team Africa and the class of 2015. That said, there wasn’t a team present that had more fun than Team Africa, and it was infectious. After falling into a deep hole to the 2015 kids due to lazy passes and inattentiveness on both ends of the floor, Africa surged to take command of the game because of their Big Three of point guards Medhy-Sofian Ngouama and Sidy Nidir and forward Pape Diatta.

At the crest of which was Ngouama, known in the tournament as Nehdi Ngouma. After a very modest FIBA Under-18 European Championship last month for France, the Algerian point guard showed out in his final game of the tournament. He finished with 18 points, along with seven rebounds and four assists. His playing style (as well as his 6-foot-2 frame) is eerily reminiscent of Jeff Teague’s. Ngouama’s highlight of the game, however, was an unbelievable breakaway dunk in which he appeared to be coasting for a casual layup only to ramp up his elevation at the last second for an explosive finish.

Africa ended up cruising to a 69-56 victory and immediately celebrated with an impromptu team dance-off. A few of the players would later walk up to the stands to the sound of a horde of screaming children and begin flinging Adidas Nations T-shirts and basketball shorts with no regard for the aerodynamics of said garments. From their enthusiasm, you’d have no idea they only finished in third place.

3. We were in the presence of actual stars!

Hey, remember during last season’s playoffs when John Wall, Damian Lillard, and Jrue Holiday lived in a shoe? Well, it turns out they spend time together away from home, too. (Or maybe Long Beach is actually one giant shoe?) Both Wall and Lillard could be spotted watching the games courtside. Holiday wasn’t in attendance, but his little brother, Aaron, who played on the 2015 team, was an acceptable stand-in. Also conspicuously absent was narrator A$AP Rocky. Actually, come to think of it, I don’t recall the live DJ ever playing the beat to A$AP’s “Goldie,” either. Huge missed opportunity there, Adidas.

These guys were all minor draws in the presence of Adidas’s crown jewel, Derrick Rose. The announcer’s rundown of the athletes in attendance garnered a tepid response whether it was Wall or Kenneth Faried (another Adidas-sponsored attendee), but Rose’s name brought a roar of applause. It was a lot of love for a player who spent the entire night assuming the Lincoln Monument position, lifeless gaze and all.

Here’s something made very apparent to me, even from the opposite side of the court at the top of the stands: Rose’s calves were so cut, you could pinpoint the exact spot where the Divine Master Craftsman placed the chisel to create those dips and ridges. It refracted light in such a way that I’m positive he’s operating with bionic leg attachments. This has been a working theory I’ve had for a long time, what with his spec’d-out leg accessories over the years.

4. Finally, a home for shirseys

Adidas is continuing to push the whole sleeved-jerseys thing on us at both the college and pro levels, to varying degrees of dissent, but it may have found its true niche at Adidas Nations, and hopefully, other high school basketball tournaments throughout the year. The shirseys are ideal for the underdeveloped, near-emaciated bodies of the high school underclassmen. These are still very, very skinny kids — the extra fabric masks some of that, and the bulkier silhouette almost gives you a look into the future in terms of what they’ll look like once they start pounding whey protein shakes. The jerseys were particularly useful for the third-place game between Team Africa and USA’s 2015 team, which was full of scrawny players in need of every inch of fabric they could get. Despite only being a year apart, the Class of 2014 was noticeably bigger, with bodies that were actually filling out the jerseys. A year can make a considerable amount of difference, even (or especially) at the high school level.