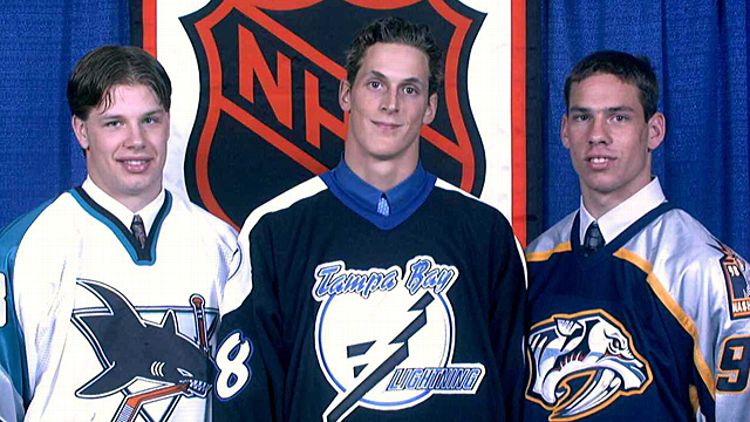 NHL history is filled with transactions of all shapes and sizes, and in the grand scheme of things most of them end up being fairly meaningless. But several times a season, whether or not we realize it at the time, a team will make a move that reverberates for years or even decades.

Most of those deals are firmly imprinted in fans’ memories. Twenty years later, many Flyers fans can still recite the Eric Lindros trade by heart. The average Habs fan can’t go more than a few hours in their day-to-day lives without being reminded of the Scott Gomez deal. Entire sections of Toronto newspapers were dedicated to daily rehashings of the Phil Kessel–Tyler Seguin trade (at least until it started looking like a good move, at which point it was mysteriously forgotten).

But then there’s the other side of the coin: those trades and transactions that helped alter NHL history but, for whatever reason, have been largely forgotten.

Now, obviously everyone’s mileage will vary a bit here; if you’re a die-hard fan of one of the teams involved, these “forgotten” moves may not be especially forgotten at all. But for many fans, these history-altering deals have been filed away in the cluttered attic of their memory banks — if they’ve ever heard of them at all.

I’m sure there are plenty of examples out there and it would probably take us several posts to even scratch the surface, but here are five to start with:

Maybe Everyone Should Just Stop Trading for Viktor Kozlov

In last week’s post on historically good and bad streaks to start an NHL season, I included a brief mention of the Sharks passing on Chris Pronger in the 1993 draft, trading down instead to take Viktor Kozlov. As more than a few Sharks fans made a point of reminding me, that wasn’t the Sharks’ only Kozlov-related brush with the top of the NHL draft.

First things first: Viktor Kozlov was not a bad player. In fact, he hung around for 14 NHL seasons, playing in the 2000 All-Star Game and recording 537 points in 897 career games. But just 69 of those points came in the parts of four seasons he spent with the Sharks, leading to a young Kozlov being widely labeled a disappointment (and of course, since he is Russian, also an enigma).

So the Sharks traded him to the Panthers … for the first overall pick in the 1998 draft.

In fairness, the Panthers didn’t know they were giving up the first overall choice when they packaged their pick and veteran Dave Lowry for Kozlov in November 1997. They were 5-8-4 when they made the deal, and just more than a year removed from their surprise run to the 1996 Cup final. As GM Bryan Murray explained at the time, the organization figured Kozlov had better potential than anyone they’d be able to draft with their pick.

Oops. A late-season 13-game losing streak helped the Panthers to the league’s second-worst record, and their pick moved up to first after they “won” the draft lottery and leapfrogged the last-place Lightning. The top prospect for the 1998 draft? Just future All-Star and Rocket Richard winner Vincent Lecavalier.

Of course, you’ve probably noticed Lecavlier wasn’t picked by the Sharks after all. That was due to a complicated deal they’d made with the Lightning in March 1998: In exchange for a package centered on veteran defenseman Bryan Marchment, the Sharks gave Tampa Bay the right to swap picks in that year’s draft. That deal made Lecavalier a member of the Lightning, bumping the Sharks to the second pick. They eventually traded down to no. 3 and took defenseman Brad Stuart.

Years later, Stuart would be part of the deal that brought Joe Thornton to San Jose. All part of the plan, no doubt.

The Entire NHL Doesn’t Realize It Can Draft Pavel Bure

OK, so this one may be slightly less “forgotten” than usual after this week’s ceremony to retire Bure’s number in Vancouver, but it’s still a great story.

Bure had just set the Soviet League rookie goal-scoring record as an 18-year-old when the Canucks drafted him in the sixth round of the 1989 NHL entry draft. You may have noticed that sentence doesn’t seem to make any sense, since top prospects don’t usually last until the 113th pick.

Bure did, and for good reason: The rest of the league thought he was ineligible. The rules for drafting Soviet players were complex, and the records available to NHL teams indicated that Bure wasn’t eligible.

But Canucks director of scouting Mike Penny wasn’t so sure, and he convinced GM Pat Quinn to gamble a late-round pick on Bure. The league initially ruled against Vancouver, declaring the pick invalid. But thanks to some digging by Russian sportswriter Igor Kuperman, the Canucks were able to uncover evidence of additional Bure games that the official stats had missed.

So one full year after the Canucks called Bure’s name, the NHL overturned its decision on the eve of the 1990 draft and allowed the pick to stand. Bure arrived in the NHL in 1991, and he would go down in history as arguably the greatest 113th overall pick the league had ever known.

Now That’s How You Protect Your Goaltender

NHL expansion drafts can be funny things. They typically involve complicated rules that even the franchises involved may not fully understand, and teams are often left scrambling to make deals to protect their players from being snapped up.

That was the situation the Sharks found themselves facing in 2000, when the NHL welcomed the Blue Jackets and Wild to the league. That year’s expansion rules dictated that teams would have to expose at least one goaltender with NHL experience, and it looked like San Jose would have to make the previous year’s third-stringer available. That shouldn’t have been a big deal — we were talking about a former ninth-round pick with just two career wins in 11 NHL games — but the Sharks still wanted to keep him.

So they got to work cutting side deals. They sent a ninth-round pick and a conditional pick to Columbus, and seventh- and third-rounders (plus Andy Sutton) to Minnesota. In exchange, both teams agreed not to take the Sharks’ young goalie.

Instead, the Wild and Blue Jackets spent the first rounds of the draft loading up on veteran goalies like Mike Vernon, Chris Terreri, and Rick Tabaracci (and in most cases, immediately trading them somewhere else for draft picks).

As for that young Sharks goalie with the two career wins, he turned out to be OK. It was a kid by the name of Evgeni Nabokov, and the next season he went on to win the Calder Trophy as rookie of the year. He’d be the Sharks starter until 2010, recording the second-most wins of any goalie in that decade. Not bad for a guy the Blue Jackets or Wild could have had for free on their very first day in the league.

Drafting a goalie in the first round is always tricky business. Goaltenders typically take longer to develop than other positions, making them much harder to project as 18-year-olds. Many of history’s best goalies have been late-round picks, or even went undrafted altogether.

Still, there are years where a consensus can’t-miss prospect is available. And if you’re a franchise that feels like that guy can be your goaltender of the future, you’d better be prepared to use a high pick to get him.

That’s the situation the Calgary Flames found themselves in heading into the 1990 draft. The team had a very good goalie in Mike Vernon, but he was 27 and coming off a disappointing season. With an eye toward the future, the Flames set their sights on the top-ranked goaltending prospect of the draft: Trevor Kidd.

Kidd had been named the top goalie in Canadian junior hockey and had won a gold medal with Team Canada in the world junior tournament. Everyone agreed he was the top goalie available, and as an added bonus he was a Western kid who’d be welcomed with open arms in Calgary.

The Devils, as it turns out, also needed a goalie — or at least were willing to draft one if they felt he was the best player available. And that’s exactly what happened at the no. 20 spot, as the Devils used the Flames’ pick to take the draft’s second-best goalie prospect: Martin Brodeur.

Let’s just say this one is still a bit of a sore spot with Flames fans.

The One Time the Flyers Had Too Many Goalies

We looked at the trade value of a goaltender a few weeks back, and found that it’s typically not all that high. But back in 1989, one team was willing to make an exception. That would be the Philadelphia Flyers, who were willing to give up not one but two first-round draft picks to acquire a goalie. A backup goalie, actually. From one of the worst teams in the league.

Ken Wregget was a fairly typical Toronto Maple Leafs goaltender in the mid-’80s, which is to say he was young, marginally talented, and typically left to fend for himself behind a comically inept defense. The 1988-89 season was his fifth in Toronto, and he’d yet to put up a save percentage better than .875 and only had a GAA under 4.00 once. Even during the offensive explosion of the 1980s, those were below-average numbers, and Wregget had even led the league in losses in both 1986-87 and 1987-88.

He wasn’t a bad goalie — remember, the Leafs were an awful team. He just wasn’t exactly the sort of guy you’d sell the farm for.

And that was especially true if you already had a star in the crease, which the Flyers did. Ron Hextall was only in his third season, but had already been an All-Star in 1988, and had won both the Vezina and Conn Smythe in 1987. And he was durable, starting 60-plus games in each of those first three seasons.

And yet, at the 1989 trade deadline, the Flyers agreed to send a pair of first-round picks in that year’s draft (their own pick and one they’d previously acquired from the Flames) to Toronto in exchange for Wregget. That’s right, the Maple Leafs arguably got more for their part-time starter than the Canadiens would get for Patrick Roy or the Sabres would receive for Dominik Hasek. The NHL is a funny league.

Anyway, the trade didn’t make an iota of sense, so it goes without saying that it worked out brilliantly for Philadelphia.

Wregget only started three games for the Flyers over the rest of the regular season. But when an injured Hextall was a surprise scratch just minutes before Game 7 of the Patrick Division finals in Pittsburgh, Wregget got the call. He stood on his head in a 4-1 win, stopping 39 of 40 shots to eliminate the Penguins and send the Flyers to the conference finals (where they’d lose to the Canadiens in a series best remembered for Hextall doing this).

The following season, a contract holdout and groin injury kept Hextall out of the lineup for almost the entire season, and Wregget had the best season of his career as the full-time starter. He was eventually traded to the Penguins as part of the deal that landed the Flyers Mark Recchi, and Wregget won a Cup ring in 1992.

As for the Maple Leafs, they went into the 1989 draft with three first-rounders (the two from the Flyers, plus their own), and somehow wound up using all three on players from the same junior team: Scott Thornton, Rob Pearson, and Steve Bancroft. Those three combined for just 50 goals in 225 games as Maple Leafs, and were all out of the Toronto system by 1994, proving once and for all that there’s no situation so good that the Maple Leafs can’t screw it up.