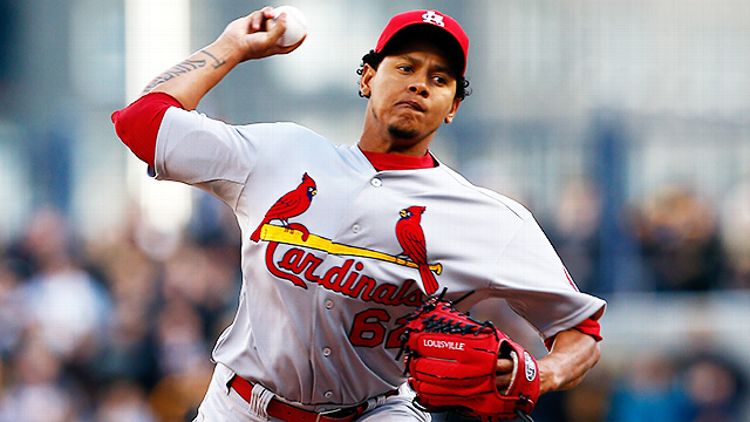 One of the constants in baseball in the 2000s has been the Cardinals’ and Red Sox’s status as contenders. Not every year, sure, but most years. So while only a fool would attempt to predict the 2016 World Series matchup with certainty on October 1 of that year, let alone today, it’s a safe bet these two franchises will soon find their way back to the big stage. Maybe they’ll do it in the same season. Maybe that season will be 2016. Maybe we don’t want to talk about PED allegations, and engaging in this little thought experiment seems like a better way to spend the first stretch of baseball’s offseason.

So let’s go head and assume. Let’s assume the Cardinals and Red Sox, two organizations rife with considerable young talent, will meet again in the World Series three years from now. And let’s predict what headlines we might encounter at that time.

Sure, Trevor Rosenthal and Carlos Martinez anchored the bullpen in 2013, but both were groomed as starters throughout their minor league careers. (Actually, both were originally infielders, but that ship has probably sailed.) We’ve seen quite a few starting pitching prospects enjoy success in relief as rookies and then never return to the rotation — including Neftali Feliz and Aroldis Chapman in recent years — but the Cardinals understand better than most teams how much more valuable even a mid-rotation starter can be than a relief pitcher. They’ve said they’re going to keep Rosenthal in relief next year, but that still gives them two seasons to come to their senses and move the flamethrower into his rightful starting spot.

So, Rosenthal and Martinez will be in the rotation. But where? Adam Wainwright is probably signed through the Rapture, with a vesting option for the Great Tribulation just in case John Mozeliak got his eschatology wrong and the World Series continues through the end times. Michael Wacha acquitted himself well in his rookie campaign and seems as likely to be in the Cardinals’ rotation as anywhere else. Lance Lynn and Joe Kelly, who started behind Wainwright and Wacha this postseason, will still be under team control in 2016. Jaime Garcia might return from shoulder surgery at some point in the next three years. And then there’s Shelby Miller, who delivered an even better rookie season than Wacha until he was kidnapped during the playoffs and held for ransom.

That glut of pitching is great news for the Cardinals, but bad news for Lynn, who’s good for 180 to 200 league-average innings per year and is under team control through 2017. That’d be enough to guarantee him a spot on most teams, but the Cardinals aren’t most teams. Kelly looks bound for the bullpen, and Garcia’s recovery is no sure thing, but Lynn still seems likely to find himself squeezed out of a starting rotation that, by 2016, should be too crowded for a pitcher who’s shaping up to be a rich man’s Joe Blanton. Lynn’s real value to the Cardinals going forward might be his ability to net them a player via trade who can plug a hole elsewhere.

That leaves a five-man rotation of Wainwright, Miller, Wacha, Rosenthal, and Martinez. Even if an injury knocks out one of those arms, the Cardinals will still have a stacked playoff rotation for their showdown with the Sox.

Jackie Bradley is the reason the Red Sox are going to let Jacoby Ellsbury go this winter.

In the interest of full disclosure, I’ve been desperately in love with Bradley for years. He approaches the game — and life in general — with ebullience and joie de vivre. He played an integral role in leading my beloved South Carolina Gamecocks to back-to-back national championships. He’s a baseball player without weaknesses.

Bradley delivered a torrid spring, igniting fires of optimism in Red Sox Nation that shocked even the most ardent JBJ boosters. He didn’t do much with the 107 big league plate appearances he earned this season, posting a .189/.280/.337 triple-slash line. But fear not: Bradley is the kind of player whose contributions don’t always show up on a baseball card. He’s an outstanding defensive center fielder, a judicious baserunner, and one of the most patient hitters in the minor leagues. That’s why, when Ellsbury walks, the Red Sox seem to be totally comfortable sliding Bradley into that spot.

In the interest of conveying Bradley’s true potential to people who haven’t pledged their undying devotion to Boston’s rookie center fielder: We’re not talking about Ichiro or Mike Trout here. In fact, the presence of Cardinals über-prospect Oscar Taveras means JBJ will likely be the second-best center fielder in this hypothetical 2016 series. But Bradley’s ceiling involves hitting in the high .200s, drawing 70 or 80 walks per year, and playing Gold Glove–caliber defense.

And, of course, scoring those billion runs. That’ll come in part thanks to the men hitting behind Bradley. Third baseman Garin Cecchini, due up perhaps as early as mid-2014, is a better hitter than he is anything else. He’ll allow the Red Sox to move Will Middlebrooks to fill another hole and capitalize on what is a seller’s third-base market. Cecchini, if he sticks, will also move Xander Bogaerts to shortstop, where Bogaerts ought to continue to develop into the kind of player who loses MVP races to Trout for the next 10 years. Behind Bogaerts, the Sox would have Dustin Pedroia, who will be a formidable hitter despite being on the downside of his career, and perhaps even David Ortiz, who will be just shy of his 41st birthday, and who has finally convinced me to stop predicting his demise.

The great leadoff hitters relentlessly put balls in play and work long counts, stringing together singles and walks game in and game out. They don’t so much beat pitchers as erode them. Bradley could be such a player, and with Cecchini, Bogaerts, Pedroia, and Ortiz moving him over and in, Bradley will stuff the box score.

Pete Kozma was by far the Cardinals’ worst everyday player this year, a .217/.275/.273 hitter whose defense didn’t make up for it. (Of course, Kozma would have to play defense like James Longstreet to make up for a batting line like that.) He has also been a magnet for weird bullshit. Not only did he bungle a double-play ball in Game 1 of this World Series, leading to Dana DeMuth’s shockingly bad (and eventually overturned) out call, but Kozma dropped a popup in last year’s play-in game, leading to the infield fly call that divided a nation. (In the umpires’ defense, the parking lot at Turner Field has the infield markings from the old Fulton County Stadium laid out, so maybe they got confused.) If Kozma is still in the Cardinals’ starting lineup by 2016, I’m going to sell all my worldly possessions and go meditate in the woods during the World Series, because life will have lost all discernible order and meaning.

Which player replaces Kozma is another question. Ryan Jackson is the closest thing the Cardinals have to an in-house answer at shortstop. With Kozma exploring the depths of how bad a baseball player can be, it’s kind of surprising that Jackson didn’t play more than seven games in 2013. Given that Jackson’s bat isn’t going to set the world on fire, though, I’d predict that by 2016 the Cardinals will have gone outside the organization for a shortstop, perhaps by trading Lynn, Kelly, or Matt Adams for a replacement.

There are a few other headlines we’d probably see following a Cardinals–Red Sox 2016 World Series matchup, like Taveras giving Boston pitchers fits, and Kolten Wong attaining redemption for getting picked off in Game 4 of this year’s duel. But adding in those predictions makes it seem like I think I know which team will win, and trying to predict THAT three years out is just plain silly.