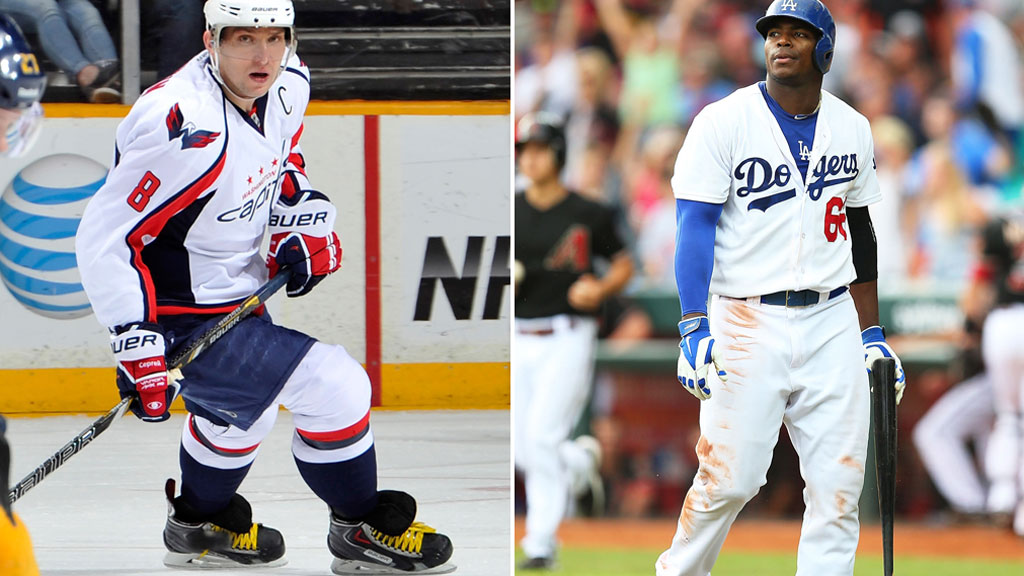 At their best, player comparisons are an easy shorthand for scouts and analysts to describe an athlete to an unfamiliar audience. More often, they’re a lazy heuristic that strips that description of its nuance. Doug McDermott is a 6-foot-8 white guy who can shoot, and he is therefore Larry Bird — that sort of thing.

Player comps are often restricted by position, physical stature, and (too often) by race. That often prevents us from seeing the similarities between guys who don’t have much in common superficially.

Puig is one of the most gifted and exciting athletes in baseball, possessed of an outrageous throwing arm and equally outrageous power and speed. Most enticingly, Puig, who is entering his sophomore season with L.A., hasn’t had his enthusiasm stamped out by a baseball establishment that treasures conformity and a baseball media that has, over the past decade, elevated moral outrage and concern trolling to a level that would make Carrie Nation shield her eyes.

Puig’s exuberant antics made him a folk hero to certain fans, but some veteran players didn’t warm to him so quickly. After Puig executed a legendary bat flip on a ball that didn’t even leave the park, Carlos Beltran suggested that the rookie might take it down a notch. This followed a string of impassioned outbursts from journalists and players alike, culminating in a bizarrely elaborate hypothetical from Scott Miller, formerly of CBS, who suggested that Puig needed to be brought to heel before his showboating or occasional propensity to miss a cutoff man or bait opponents into trying to run on him might outweigh Puig’s 160 OPS+, which was second on the team.

The Puig drama extended to this spring with a majestic TOOTBLAN in Australia that sparked a whole new round of weirdness and hostility, chronicled and critiqued admirably by Sports on Earth’s Tomas Rios.

We know the three-time Hart Trophy winner pretty well by now, even if the Sid-vs.-Ovi trope is fairly played out, because, while Ovechkin is better at scoring goals than anyone else on the planet, Pittsburgh’s Sidney Crosby is better than Ovechkin at pretty much everything else. Even so, while scoring goals is only one part of the game, it’s the most important part, which is why more people come out to see Ovechkin play than, like, Manny Malhotra, the Alex Ovechkin of winning faceoffs.

Ovechkin, however, gets criticized for other aspects of his game, because while he’s a tremendous shooter and skater, and a vicious hitter when he wants to be, he kind of sucks on defense. In fact, Ovechkin’s own coach, Adam Oates, criticized Ovechkin’s effort in Tuesday’s 5-0 loss to Dallas. The Caps will almost certainly miss the playoffs for the first time since 2007, and we’ll know things are really bad when Oates comes out to a press conference with the uplugged Xbox controller GIF on his phone. Ovechkin is not the great two-way player Jonathan Toews is or the playmaker Crosby is, and that’s a failing certain members of the hockey glitterati can’t forgive (lookin’ at you, Mike Milbury). Nowadays, the fun thing to do is to hand-wave away Ovechkin’s league-leading goal total by pointing to his near-historically bad plus/minus, a statistic not unlike RBI in baseball, born from an era when sportswriters didn’t understand context and couldn’t do any math more complicated than addition. And like RBI, plus/minus survives in the popular conversation in the face of better alternatives because too many commenters still can’t (or won’t) do those things.

Plus Ovechkin drives too fast, wore a tinted visor, has yellow skate laces, and sometimes pretends his stick is on fire. Which is a bad thing, because hockey is a game that’s at its most entertaining when creativity and emotion are at a minimum, or something.

The criticisms of Puig and Ovechkin come in two forms: legitimate, if somewhat exaggerated, concerns about them as all-around players, and hysterical overreactions to colorful (probably not coincidentally) foreign players who enthusiastically celebrate their success.

The first is an unfortunate outgrowth of talent — the persistent desire to blame a team’s failures on its best player, apologies to Patrick Ewing, Barry Bonds, Peyton Manning, Donovan McNabb, the young LeBron James, and every captain of England’s national soccer team since 1970. The media’s inability to recognize mankind’s imperfection and accept greatness when it presents itself astounds me, but it’s the price of doing business. And make no mistake, Puig is one of the most aggressive players in the game today, but he was within a couple of runs of average with the glove and on the bases in 2013, and at 23, he has a chance to improve. While I’d call Ovechkin’s defense inconsistent, you could also call it apathetic. Even so, that’s not his game — the league is full of big, strong, fast wingers whose job is to score goals at all costs and for whom defense is an afterthought.

The second speaks to the xenophobia that’s still part and parcel of sports analysis. Last year, Seth Amitin and Adam Felder presented a study in The Atlantic that showed that baseball announcers are 14 percent more likely to praise American or Canadian players for intangibles than they are to praise foreign (predominantly Latin, particularly Cuban) players. It might not be conscious, but it’s a marked difference. Similarly, European (predominantly Slavic, particularly Russian) hockey players are often targeted for criticism of their own effort and toughness. It’s gotten to the point where “enigmatic” is almost synonymous with “Russian” in hockey vernacular.

Ovechkin and Puig could not be more physically or culturally different, but both share the same fatal flaw: violating the wrong norms, while in possession of the wrong passport and the wrong first language.