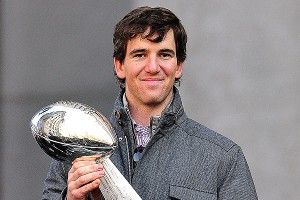 Percentage by which that number has grown since 1985: 10.

Percentage of 513 former NFL players in one study done in 2011 by researchers at Loyola University of Chicago who scored poorly enough on a test for Alzheimer’s symptoms to indicate dementia: 35.

The amount of Gs experienced by a soccer player heading a ball: about 20.

The amount of Gs experienced in the worst hit Purdue University researchers recorded in a two-year study on high school football players: almost 300.

Number of people who watched this year’s Super Bowl: 111.3 million.

Number of workers NBC used for its Super Bowl telecast:475.

Average price of a 30-second ad during the Super Bowl: $3.5 million.

The most expensive 30-second ad: $4 million.

The cost of a room for one night at the budget Best Inn in Indianapolis on the weekend of this year’s Super Bowl: $898.99.

The cost of the same room the next weekend: $55.

Percentage by which the number of sports talk radio stations in America has grown since 2002: 64.

Percentage by which the TV ratings for NBA games on ESPN through Feb. 12 were up compared to last year: 27.

Percentage by which the New York Knicks’ TV ratings went up in the first week and a half of Jeremy Lin starting at point guard: 70.

Lin’s record in his six games at Harvard against Cornell: 1-5.

Lin’s record in his first six games as a starting point guard in the NBA: 6-0.

Points scored by Lin in his first five starts — the most by any player since the NBA and ABA merger in 1976: 136.

Time Lin habitually got to the gym when he was with the Golden State Warriors for practices that started at noon: 8:30.

The cost for two nights in a rental home in luxury neighborhood Isleworth in Orlando the weekend of the NBA All-Star Game: $27,000.

The number of children who slept in the Coalition for the Homeless shelter the night last November that 60 Minutes aired a segment about homeless kids and families in the Orlando area: 295.

The per-plate cost of a fundraiser with President Obama at Vince Carter’s house in Orlando: $30,000.

The national average of additional money a “food insecure” person reports needing per week in order to meet his or her food needs: $13.99.

The cost of Nike’s limited-edition Foamposite Galaxy sneakers released in time for the NBA’s All-Star weekend: $220.

The number of deputies in riot gear who tried to calm the shoe-crazed crowd at a mall in Orlando: more than 100.

The price of the sneakers on eBay almost immediately after they were sold at the malls: $1,000 and (way) up.