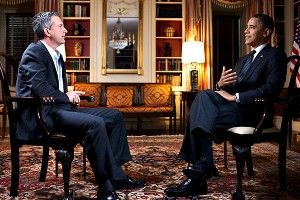 The B.S. Report made a special road trip to the White House yesterday to make podcast history: the first-ever podcast with a sitting U.S. President. Take that, Marc Maron! Even if we only had 25 minutes, Grantland editor-in-chief Bill Simmons and President Obama covered a bunch of sports-related topics, including how the President manages to make time to follow sports; his feelings on Linsanity and the Bulls’ title chances; whether he considered getting involved with the NBA lockout; the wisdom of a college football playoff system; his feelings on concussions and the NFL; what it’s like to throw out the first pitch before baseball games; his favorite White House visits from championship teams; coaching his daughter’s basketball team; the pearls of wisdom he recently dispensed to Chris Paul and Blake Griffin; and his answers to two “greatest ever” questions (one basketball, one television).

You can listen to the B.S. Report with President Obama on ESPN.com Podcenter or on iTunes.

For a complete transcript of the podcast, click here.

You can find clips from the interview below.