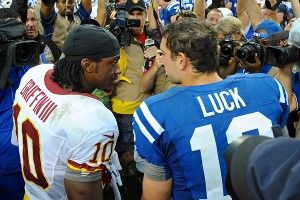 This will be a recurring theme for me. There are certain teams I love this year, and certain teams I hate. I LOVE THE COLTS. Look, their defense stinks, and they are going to be throwing. A LOT. I love Andrew Luck. I like Donald Brown. I REALLY like Austin Collie. You know who you’re starting on the Bears (Forte & Marshall), but I really think that Collie is going to be a breakout star as long as he can stay healthy. You don’t have to start him this week, but you’ll be starting him by Week 5. Book it.

There were three teams that I avoided drafting completely. The Browns are one of them. Besides having only ONE (!) player drafted in the top 146 (sorry, Greg Little, missed it by .3), they have absolutely no upside at all. If you drafted T-Rich (first terrible nickname of the season!), try to trade him now before his value dries up like Michelle Pfeiffer’s box office draw. As far as the Eagles go, you know what you’re doing: Vick is healthy, Shady is a beast, Maclin is a WR2, and DeSean is a flex.

Pettigrew averaged only 9.4 yards per catch last season. Guess what? That sucks. What doesn’t suck for fantasy owners is that Pettigrew is more likely to exceed his career mark of 10.0 YPC than repeat his lackluster 2011 average. If he repeats his 83 receptions, you’re looking at a top-five tight end in point-per-reception formats. And with an outside chance that the Lions sign 44-year-old Barry Sanders and my grandmother to alleviate their running back woes, Pettigrew is probably looking at a bump in red zone targets.

You know what will happen. Tom Brady will throw for 450 and four TDs. Wes Welker, Brandon Lloyd, and Gronkowski will get more than 100 yards and a Gronk Spike will turn a football into a sphere. The importance of this game is shared with a lot of other games: How will “blank running back” prove himself in Week 1? This game has a lot of disadvantages for Chris Johnson. The Titans will be playing from behind. The Patriots will want to prove that their defense made large strides this offseason. I still think Johnson proves that he’s back — 180 total yards and two TDs.

I have seen the whole Romeo Crennel-as-a-head-coach thing up close for four seasons (he’s pretty easy to spot), and the results aren’t pretty. Consequently, I am proud to say I do not own Matt Cassel, Jamaal Charles, Dwayne Bowe, or Jon Baldwin in any leagues. The exception to this rule: Peyton Hillis, who’ll be utilized more than people think — particularly in the red zone — by offensive coordinator Brian Daboll, who was with the Browns in 2010 during Hillis’s breakout season. I seem to be in the minority, but I like Roddy White more than Julio Jones, though both are great starts this week and every week.

It’s safe to ignore these clubs and write them off as incomplete rosters that’ll play their meeting out with the intrigue and grace of a Gerard Butler romantic comedy. Blaine Gabbert and Christian Ponder remain better suited to meet in the AdvoCare V100 Independence Bowl. Given the well-documented injury and contract struggles of our respective star running backs, start Rashad Jennings and Toby Gerhart with confidence. Percy Harvin is heralded but I don’t have a single memory of watching him do anything in Viking purple and thus have a baseless caution about the dude’s outlook.

Mike Shanahan is rumored to be working on a Moneyball-like book that will lay out his running back strategy. It’s called Magic 8 Ball.

This is how you know that the Washington running back situation is screwed: The players don’t even know who is going to start on a weekly basis. Former Redskin tight end Chris Cooley says that he started Ryan Torain on his fantasy team once and then watched as Roy Helu got all of the carries that week! Chris Cooley attends team meetings and practices!

Forget Mark Sanchez, Shonn Greene has exactly four weeks until the fantasy heads start the catcalls for Bilal Powell. Is Powell the next Maurice Jones-Drew or Joe McKnight? I have no idea, but the unknown is infinitely more interesting than 20 carries and 54 yards. Stevie Johnson finally escaped from Revis Island last November with an eight-catch-and-a-score performance against the Jets; I think slot ace David Nelson has the tools to put up equal numbers. C.J. Spiller was such a late-season fantasy playoff run gem that I can’t subscribe to the notion of Fred Jackson restoring order to the Buffalo backfield. In all cases I’d rather own the intrigue-laden number twos.

I had never heard of Ryan Tannehill before a week ago. I think it’s probably a bad sign that when I Googled for images of him, WAY more images of his wife came up than of him. Meanwhile, Google Matt Schaub and you get nothing but game pics plus one picture of him delighting in a Jenga pull so impressive, I call Photoshop. THIS GOOGLE EXERCISE BODES POORLY.

I’m going to use this space to talk about Randy Moss. Here are the facts:

I’m not saying, but I’m just saying. He’s unowned in over 20 percent of leagues.

This fall, FX brings you another show steeped in realism and determination. From the people who brought you Louie comes this season’s new hit comedy. Meet Larry, a down-on-his-luck WR with immense skill who’s just trying to find a QB in the arid air of Phoenix. It’s a half-hour of side-busting fun as Larry tries to convince his best friend John that he can throw the ball more than 10 yards and waits to see if his pal Beanie can stay healthy for more than five minutes. Only this fall, after Louie on FX.

This game features maybe the best sneaky fantasy play of the week in DeAngelo Williams. Williams will probably get an increased workload due to Jonathan Stewart’s injured ankle. Stewart and Williams combined for about 130 total yards per game last year, so a reasonable expectation might see you penciling in Williams for about 80 percent of that. One hundred yards from scrimmage and a touchdown is the baseline that I’m looking for.

Peyton Manning and the Broncos are going to be real-life football good, but Manning’s box scores will consistently read 220 yards, two TDs, one INT. I don’t buy the Jacob Tamme reunion or Demaryius Thomas as anything more than a flex stand-in. Eric Decker runs the more precise routes and will only be undone by his injury-riddled past. Meanwhile, the Steelers field a spring-football, seven-on-seven-drill Todd Haley offense with three legit deep threats and offensive line issues. The Sharky’s Cafe regulars in Latrobe, Pennsylvania, will pine for blue-collar Steelers football as Ben Roethlisberger’s unit pads stats.

Ray Rice is the only surefire skill player here. If you can find a better flex play, sit BenJarvus Green-Ellis until you see him tested against this boilerplate divisional competition. Ditto Air Dalton and his Purina puppy receivers — in two Dalton-era Ravens games/losses he’s thrown for one combined touchdown, and his leading receiver in both outings was the marginal and open Jerome Simpson. In a perfect world you’re wielding a cold Natty Boh on a night off, not dependent on Torrey Smith’s carnival-milk-jug-contest odds of landing a deep ball. The Bengals have a talented secondary — Leon Hall, Nate Clements, rookie first-rounder Dre Kirkpatrick, Pacman is still in the house — and the vibes recall the 2010 Ravens Monday opener wherein a one-yard punch-in from Willis McGahee was the night’s only score.