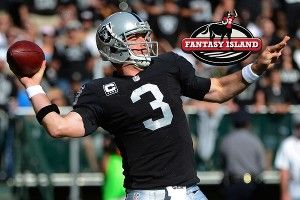 Thanks so much for participating in Fantasy Island this year. Unfortunately, due to your horrifyingly bad advice to trade Doug Martin right before he had the third-highest scoring day in ESPN fantasy football history, we are forced to let you go. There is absolutely no way that we can rightfully award a weekly fantasy column to anyone who would give fantasy advice so terrible. Please enjoy this complimentary copy of the Grantland quarterly as a consolation.

Seriously? I know that was some bad advice, but was it really any worse than Matthew Berry recommending Mike Vick as the no. 1 overall pick last year? The logic was sound: Losing the best guard in the league should have hurt his productivity. I just didn’t realize that Doug Martin was the second coming of Bo Jackson, and that the Raiders D is that bad against the run. I have a ton of juicy fantasy tidbits for this week! Did you know the Broncos are giving up the third-most points against TEs (this week, they allowed 105 yards to Jermaine Gresham), and next week, they get Greg Olsen, who is available in 45 percent of leagues and is the second-most targeted Panther? C’MON!! That is great info! Give me another shot, please!

Give it a rest. Peppering me with info that would be great for a waiver wire column is not going to work.

I really think that you are making a mistake here. I have made some great calls! Tony Romo, Jonathan Stewart, and Jermichael Finley have all been unstartable since I wrote that game show column! Remember that one? Davone Bess? Inside jokes about my friend Geoff that only nine people understood? That was gold, Mays! Gold! If you cut me off now, where will people learn that Carson Palmer has scored at least 14 points in all but one game this season? Who will listen to me when I say that Russell Wilson needs to be owned in any league with more than 10 teams? WHO?

So this is really happening, huh? Fine. I guess no one will get to read my thoughts on a terribly coached Panthers game again. I guess my Titus “TY2: Judgment Day” nickname will go unused. I guess no one will be able to remind America that Danny Amendola is coming back this week and is available in 56 percent of leagues. I guess Fantasy Island will have to find out from someone else that Vick Ballard is a legit flex play since Donnie B can’t stay healthy, the Colts are on fire offensively right now, and they play the Jags this week. THE JAGS, MAYS! This stinks. What did I ever do to you?

This trade offer will process at approximately Nov. 4, 12:18 AM ET pending review by your league members. To review this trade and cast your vote to veto or allow it, click here.