Eight Things We Learned From Attending the Sweet 16 in Anaheim 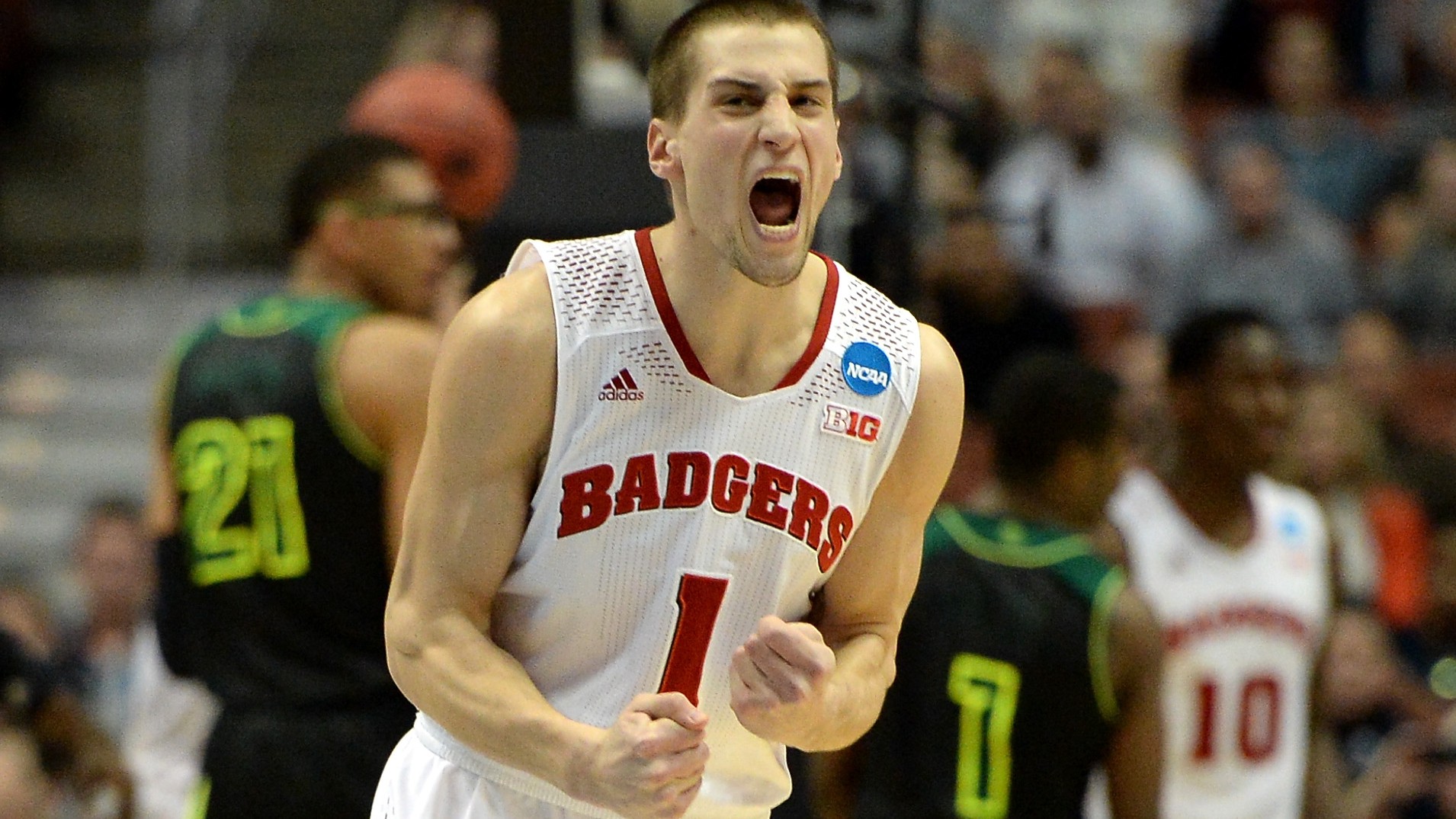 Attention basketball coaches: Do not be Baylor’s Scott Drew. Do not play 16 minutes of 1-3-1 zone against Wisconsin to start the game. Do not switch to a man-to-man defense for the final 3:39 of the first half, then go into halftime and make the stroke-of-genius adjustment of beginning the second half in a 2-3 zone. You will lose.

Sweet Jesus, was it pretty to watch Bo Ryan’s Buzzcut Badgers dissect Baylor’s zone from the sky-high press box of Anaheim’s Honda Center. I imagine it would be something like watching Johan Cruyff’s 1970s Dutch soccer teams play total football against your uncle and some of his bowling buddies. Wisconsin’s Frank Kaminsky and Sam Dekker Xed out for each other so smoothly, with such great timing and precision, one guy dropping to the short corner while the other fills his spot in the high post as their teammates swung the ball around the perimeter. They didn’t rush; they found space as it opened; when they caught the ball in the heart of the zone they were patient; they drew the defense in; they kicked the ball out and their teammates hit 3s. The Badgers put on a master class in basketball geometry.

Wisconsin’s Frank Kaminsky has the kind of oblong potato face that you’d expect to see in the old Nickelodeon Doug cartoons. He may stand seven feet tall, but he does not look like a world-beater.

Ah, but he is. Or at least he was Thursday night, scoring 19 points, grabbing a not-particularly-mind-blowing four rebounds, and blocking a mind-exploding six shots! Start with the offense. Kaminsky was not what we’d call a beast in the paint; he was more like a surgeon. Whenever he caught the ball in the heart of Baylor’s zone, he used a variety of shot fakes, pass fakes, pivots, reverse pivots, and step-throughs to freeze and befuddle Baylor shot-blockers Isaiah Austin and Cory Jefferson. Then he’d finish right over them.

On defense, he basically just protected the rim like any 7-footer should and let Baylor’s offense make him look like the second coming of HakembeMark OlajutumboEaton. Don’t ask me why Baylor’s dribble handoffs only seemed to lead its players into contested jumpers and drives into traffic, or why they seemed determined to shoot the ball directly through Kaminsky’s arms. Kaminsky did his part — he rotated with the ball and patrolled the paint and put himself into a position to challenge shots. Why Baylor saw fit to try to ram the ball through his arms to get it through the net is the true mystery.

Hey, Thought Catalog. I know maudlin lists of reasons to move out of Brooklyn are super popular, and I was willing to just look the other way while you did whatever it is that you do. But then, during a timeout in the Wisconsin-Baylor game, I decided to check my email on press row, and I clicked on a link that said “gross” (I bear some responsibility there, I guess), and all of a sudden I had a huge headline on my laptop screen that read “13 Ways to Make Your Cum Delicious.” This is almost literally the last thing I want to see on my screen. And because I’m an idiot, when I closed the tab as quickly as I possibly could, the next open tab that showed up was an article called “The Art and Science of Muskrat Cooking.” I think I’m gonna land on an FBI watch list for this.

After Wisconsin’s 69-52 win, Badgers coach Bo Ryan waxed poetic about pump fakes during his postgame press conference: “Nobody makes more ball fakes and pump fakes than Wisconsin. … Shot fakes, ball fakes work. Having played quarterback, pump fakes work. It’s not that hard, and yet it’s amazing how many people do not use them.”

There is wisdom in the Gospel of Buzzcut, because Baylor played defense Thursday as if it had never encountered a shot fake before. The Bears have a number of long, active, spry defenders who can gobble up space with their quickness. They did so on many occasions against Wisconsin, despite the Badgers’ sharp passing, and if they had been able to keep their feet on the floor, their zone schemes might have given Wisconsin much more trouble. Instead, what happened time after time was this: A Badgers player would swing the ball out to guard Ben Brust at the top of the key; a Baylor defender would close out; Brust would pump-fake; said defender would leap halfway to half court; Brust would hit a 3-pointer. In the second half, Wisconsin had a stretch in which I counted four consecutive scoring possessions where the basket came off a pump fake. I emailed Grantland college basketball columnist Mark Titus to ask if Drew teaches his players to bite on every shot fake, and he replied:

“I see you’re starting to understand why I was so shocked to learn he’s 8-3 in the tourney.”

After the first weekend of the tournament, with Duke’s Jabari Parker and Kansas’s Andrew Wiggins bowing out without making much of an impact, many of us were left wondering if any projected NBA draft lottery pick would improve his stock via March Madness.

Hey, Aaron — why don’t you catch the ball at midcourt, reach the foul line in two dribbles, then split two defenders in the air for a double-pump layup?

Sure, I can do that.

Why don’t you show them that 3-pointer from the right wing?

While we’re at it, it wouldn’t be an Aaron Gordon highlight reel without an alley-oop …

I got you. One-handed.

Say, why don’t you show them you’ve got a great nose for the ball in clutch situations?

What, you mean something like being in the right place at the right time? Why don’t I catch this airball and lay it back in to give my team a 52-50 lead with less than six minutes to play.

Can you do anything else?

Can I ever! Watch, I’m gonna turn and face at the right post, then drive, draw some defenders, and drop the ball off so Big Zeus can get this layup.

How about you hit a free throw, though?

6. SDSU and the Spirit of Sam Cassell

Raise your glass to SDSU and bid it a fond adieu. Steve Fisher’s Aztecs played like they had all received testicle transplants from Sam Cassell before Thursday’s game. They started the game with such swagger and intensity that they might have blown Arizona off the court if Gordon hadn’t kept the Wildcats in the game. Every time an Arizona player went up to shoot in the paint, he had three SDSU players trying to swat his shot. Every time Josh Davis grabbed a rebound, he jerked his head and swung his braids and flashed his elbows in a low-grade, full-body convulsion. If he wasn’t screaming “GET OFF ME” with every rebound, then his movements said it loud enough on their own. Winston Shepard was slashing to the rim with the devil-may-care ferocity of prime Latrell Sprewell, and the best Arizona could do was foul him. And for the first 15 minutes of the second half, Xavier Thames answered every momentum-swinging haymaker that Zona threw at the Aztecs with a tightrope split of two defenders leading to a layup, or a stop-on-a-dime jumper from the elbow, or a running one-hander in the lane.

So what if Arizona made more plays down the stretch? San Diego State’s players all deserved to do the big balls dance at various points in Thursday night’s game.

Arizona’s top scorer, Nick Johnson, was scoreless for the first 37-plus minutes of the game. He finished with 15 points, and there was some discussion during Arizona’s postgame press conference about his “explosion” at the end of the game.

Johnson did not explode. He hit a breakaway layup, a dagger 3 after which he would have been justified in doing his own giant balls dance, and then 10 free throws once SDSU was forced to start fouling to extend the game in the last minute and a half. Of course Johnson deserves credit for going 10-for-10 from the line and slamming the door on the Aztecs, who made a ton of gutsy shots in the endgame that would have been more dangerous had a less reliable shooter been going to the line for Arizona.

But Johnson just did an excellent job at something he was supposed to do well. Let’s not brownnose him over an explosion that didn’t happen. Thanks to his teammates, particularly Gordon and T.J. McConnell, Johnson will get a chance to actually go off in the Elite Eight.

8. In the Elite Eight, Wisconsin Just Wants to Pump … You Up

Aaron Gordon jumps out of the gym. The Badgers love to pump-fake. This is going to be fun.

Grantland Audibles: A Visit From the Goon Squad