Balls Out: In Defense of the Sam Cassell Dance 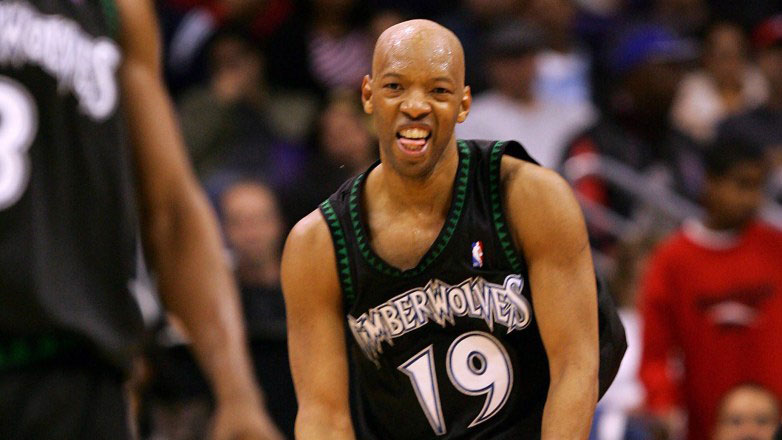 I don’t have any children, and I’ve lived in New York City for 10 years, so I’m happy to concede I’m probably something of a heathen. But I can’t help it: I enjoy the Sam Cassell “Big Balls” dance, and the NBA’s war against it irritates me in a way I can’t really articulate.

Jameer Nelson became the latest victim of the NBA’s anti-testicles stance this week after breaking out the Cassell in celebration of a game-tying 3-pointer in the waning seconds of the fourth quarter during Wednesday’s wild Chicago-Orlando game. Wednesdays are always crowded with games, and they carry the potential for absolute NBA madness. This Wednesday featured the Bulls-Magic triple-overtime thriller; Nick Young throwing punches at multiple Suns; Mark Cuban cursing out officials on live television after an insane Clippers comeback/Dallas collapse; an inexplicable Heat blowout loss in Washington; Greg Oden’s feel-good comeback; and close games all over the place. Going to an NBA game on a Wednesday night is stressful; you never know what you’re going to miss on television.

But Wednesdays are also exhilarating when things break right, as they did that night. The league felt just a bit … out of control. A little more edgy, a little less sterile. Televised sports are so manufactured, manicured down to a second-by-second level, that any accidental break from protocol feels like a victory over Big Brother in some small way.

The Big Balls dance taps into that. I completely get why the league fines players for it, and its stance has been pretty consistent for the last decade or so. “It’s an obscene and inappropriate gesture,” a league spokesman told Grantland this week. “There are better ways to celebrate.” Indeed, the league looks past lots of other celebrations that do not involve the mimicked grasping of grapefruit-sized balls — Antoine Walker’s wiggle-jiggle, the Knicks tapping three fingers against their heads upon made 3-pointers, Blake Griffin’s stone-faced post-dunk stares, the jersey pop, and all sorts of jigs and dances and jumps for joy.

And Big Balls doesn’t even garner the most serious fines. The Big Balls generally gets you $15,000. That was the penalty in the last six months or so for several Big Ball enthusiasts — Nelson, Marco Belinelli, Andray Blatche, and Caron Butler. (Credit to Blatche for being the only guy among this group fined for doing the dance while on the freaking bench, and in celebration of a teammate’s shot. Creative and Blatche-y!)

More obviously obscene gestures get stiffer fines. The NBA docked Kevin Durant $25,000 for making a “menacing” throat-slashing gesture after a clutch bucket last season, and the middle finger will generally cost you $25,000 — even if you’re trying to hide the bird as part of a face-scratching session (Reggie Evans), or even by sucking blood off of it (Glen Davis, of course). Paul Pierce’s alleged gang-sign hand gesture during a 2008 playoff game got him $25,000, and the good old Jail Blazers outdid the league by straight-up suspending Zach Randolph after Z-Bo flipped off fans in 2006.

A couple of Big Ball aficionados (Eddie House, Josh Smith) earned the larger $25,000 fine for reasons that are unclear, though in House’s case, the league appears to have come down more harshly because he Balled Out in consecutive games. I mean, come on, Eddie. You don’t want to cheapen the thing by overdoing it.

The league would probably justify the fine discrepancy by arguing that everyone understands the lewdness of the middle finger and the violence underlying the throat-slashing thing. Those are universal symbols. Perhaps there are fans who would see the Cassell dance and not immediately understand what was going on.

But something else bugs me a little about this: The Big Balls fine is in line with fines the league doles out for some instances of fighting and/or dangerous flagrant fouls, and larger than what any player has lost for flopping. A player has to reach his fourth flopping violation before facing a $15,000 fine under the league’s flopping regulations, now in their second season. The first offense is a warning, the second gets you a $5,000 fine, and the third carries a $10,000 penalty. No player has even reached the $10,000 fine yet. Not even James Harden or J.J. Barea!

This feeds into the belief, not uncommon around the league, that the NBA cares more about public perception than about substantive issues affecting the game. I don’t personally believe that criticism is fair. There are loads of people at the league office who care deeply about the nitty-gritty stuff that affects game play — rules changes, length of games, the quality of officiating, flopping, and the overall aesthetics of the game experience. Adam Silver, the soon-to-be-commissioner, is one of them. But there exists the notion that the NBA only pipes up about these things when people like Jeff Van Gundy complain about them, or when a game-deciding call is so egregiously bad (OH ED MALLOY!!!!!) that it becomes a story large enough the NBA must issue an apology. The league emphasizes delay-of-game rules and illegal screens right up until it doesn’t anymore — or so goes the line of thought. And there is probably some truth to that.

But the league has an interest in preventing the NBA from becoming some foul-mouthed, taunt-heavy, WWE-style universe. That would get tiresome and dilute the quality of the product. Surface perception, as shallow as it might seem, matters to any business. That’s why every corporation has a PR department. The league says it gets complaints about the Cassell thing, and that kind of fan reaction matters. Any business would take that kind of thing into account. There is a legitimate slippery slope argument here: If the NBA lets the Big Ball practitioners skate, what other celebrations might spread around the NBA? Would players start mooning opposing benches? The league has actually drawn a line, albeit a blurry one, in allowing harmless celebrations and punishing those carrying just about any unpleasant gesture.

(Sidenote: Who are these people complaining, and how do they do it? Do they tweet at the NBA’s official account? Do they dig up Rod Thorn’s email address, sit down, and compose an email with the subject line “Balls”? Or are they like Greenberg, that Ben Stiller character, writing hand-written complaint notes they send via the actual postal service?)

Anyway: There is something off, to me at least, in penalizing a feel-good dance more harshly than an act — flopping — that has a direct impact on game play. There are important distinctions between the two, of course. Flopping happens organically, in a spur-of-the-moment sense, and often as the result of real contact within the flow of the game. The Big Balls thing happens outside the game flow, and though it is in some cases an in-the-moment bout of exuberance, there is some premeditated individual showiness to it. A player could plausibly argue a flop was at least somewhat accidental. “I slipped, I swear!” You can’t argue some power possessed your body and instructed it to do the Big Balls dance — unless Sam Cassell is a deity with those kind of powers and we just don’t know it.

But if you’re serious about eradicating the flop, if you think it is a stain on the game, then it should probably carry a steeper penalty than a stupid dance. And that, to me, is the difference between the Cassell and all the other fined gestures — flipping off the fans, the throat-slash, etc. The Cassell is jubilant, and happy, and not really directed at anyone in particular. It is a celebration, well-earned. It is non-threatening, and most of all, a ton of freaking fun. And sports are fun! It’s just a synonym for “I have huge guts,” after all. Maybe players should just grab their stomachs and shake them?

Update: “It is done in fun,” says Ron Klempner, acting executive director of the National Basketball Players Association told me. “Some may view it in bad taste, or misinterpret it, but I think this kind of discipline is disproportionate.” The union has appealed Cassell-related fines in the past, Klempner says.

I’m open to the possibility that I’m wrong on this — that there is a silent majority of fans who find this behavior abhorrent and gross, and feel like tuning out of the NBA for a bit when they see it. Maybe they don’t want their kids seeing a grown man cup a pair of grapefruits. Maybe kids, and maybe especially little girls, shouldn’t see a grown man cup a pair of grapefruits. Maybe parents shouldn’t have to answer awkward questions about what that player just did. But penalizing the Cassell seems a little bit like over-policing, carrying the same whiff of paternalism as the dress code and other such regulations.

But that’s just me. What do you think?