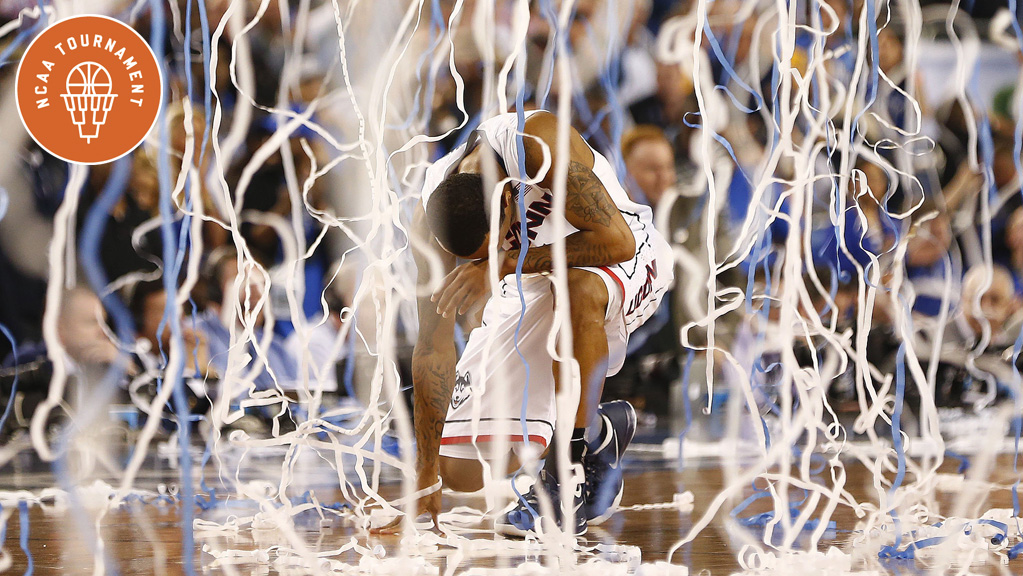 It’s not every year you hear the Most Outstanding Player of the Final Four say he goes to bed at night hungry. Sorry, did that stack the deck from the start? Did that make your confetti curl? We’ll talk about last night’s title game. But while in Arlington, I found my mind constantly shifting away from the court and toward the idea that the NCAA is on the verge of a crack-up.

Basketball. There was a fun, sloppy little basketball game last night. Kentucky was down nine in the second half when forward James Young unleashed a fierce dunk over Connecticut’s Amida Brimah. That was the last time anybody thought Kentucky had a dollop of magic left.

Young would go on to hit a couple free throws to draw Kentucky closer. Andrew Harrison, the hero of three games running, extended his right arm and flipped a beautiful pass to Dakari Johnson. My colleague Andrew Sharp has a theory that Harrison’s offense may be a cosmic accident. File that pass, which somehow avoided Ryan Boatright, as Exhibit 18. After Johnson laid the ball in and Young hit two more free throws, Connecticut’s lead was one.

Ray Allen and Rip Hamilton were watching in the stands with their old Huskies coach, Jim Calhoun.

“It’s harder to watch,” said Hamilton. “Me and Calhoun were talking about it the whole time. We were like, ‘This could be the hardest thing you could ever do.’”

“I had no control,” said Allen.

Calhoun said, “They both said, ‘We gotta make a push.’”

Every time Kentucky crept close, UConn had a push. When the lead got down to one, Shabazz Napier hit a 3 from the top of the key. After a Kentucky score, Niels Giffey hit another 3. From that point on, UConn’s lead would never dip below four.

At Giffey’s 3, I looked over at the Kentucky student section. A bunch of their fans had two hands behind their heads. Their fingers were locked. They knew.

It was there last night. A sense that this Final Four wasn’t just a merry collection of clutch shots made by — as the NCAA moderator kept calling them — “student-athletes.” It was that what had happened at Northwestern two weeks ago was another step on the path toward the end of amateurism.

Dennis Miller — comedian, libertarian noodge, occasional sports commentator — was sitting courtside. “Listen, I think they should be paid,” Miller said. “It’s silly the NCAA can print money and doesn’t give them any pocket money. If they have to unionize to get their attention, so be it.”

Let that sink in while we walk over to John Thompson, the legendary Georgetown coach. “I don’t think it’s going to be a reality,” Thompson said of the union movement. “It’s one thing to throw out ‘union’ and another to define it and to see how it could work.”

But AT&T Stadium, Coach, the money that’s oozing out of this place …

“You understand that,” Thompson said. “But to work it out and see how it works out is something different.”

To recap: John Thompson is urging restraint and Dennis Miller is our unofficial shop steward. May you live in interesting times.

Now let’s walk over to Jim Boeheim, the Syracuse coach, who was also talking about reform. “The big schools want it,” he said. “The little schools vote it down. We gotta get a different structure. Or …”

Let Boeheim’s thought — or was it a threat? — hang there. We’re talking about basketball.

Shabazz Napier. Other than John Calipari’s freshman irregulars, Connecticut’s point guard was the most enchanting thing about the tournament. Napier has an engaging, self-assured sense about him. At the postgame press conference, he put one arm around Boatright and another around his coach, Kevin Ollie.

“I’m being real humble and not trying to be cocky,” he said.

There had been noticeable friction between Napier and Boatright, UConn’s second star guard, throughout the second half. Somebody asked Boatright if he and Napier were yelling at each other during a timeout. Boatright started to explain that Jerryworld, as the stadium is known in “North Texas,” was just really loud, and that he and Napier were trying to hear one other. Napier mouthed, “That’s right.” Boatright turned around and everyone laughed.

On the court, Napier seized the postgame interview from CBS’s Jim Nantz. He introduced the “Hungry Huskies.” Was it a callback to the bit about not eating? I like to think so. Sticking his fork further into the NCAA, Napier said, “This is what happens when you ban us.” See, UConn was banned from the tourney in 2013 because of its student-athletes’ insufficient scholarly efforts. The Huskies’ win this year is both sweet revenge and a shot across the bow to the NCAA’s academic policy.

Wait, sorry, we’re talking about basketball. Or are we?

It was there Sunday afternoon, the day before the final. With the NCAA — the home team, so to speak — needing a miracle, Mark Emmert, the organization’s president, got behind a microphone.

Emmert has white hair and a mostly unlined face and looks like an officious junior U.S. senator. That he brought four administrators with him made it seem like we were before some dreary subcommittee: Stipends, Unions, and Deceit.

Any of us who proclaims amateurism “dead” ought to watch Emmert at work. He’s skillful and articulate. During Emmert’s “state of college sports and future direction of Division I” press conference, the only solid position he took was against the union model, which he called “grossly inappropriate.” For the rest of the session, he and the four other administrators tried to win over the skeptics with vagueness.

We got one semi-admission: The NCAA was getting hammered in the PR war. “We’re seen as a bit dinosaurlike,” said Kirk Schulz, the president of Kansas State.

How do you fix that? I asked Schulz later.

“We need some of you all in the room when we’re having those discussions,” he said. “With some constraints — so you don’t say President X said this or President Y said that … So you’re in the room and you’re hearing the discussion and actively there and listening.

“I think if we don’t have you in the room,” Schulz continued, “that at some point there’s a lack of appreciation for the complexity of these issues and why we’re doing the things that we’re doing.”

I’ll admit, it didn’t sound quite so insulting until I listened to it again on my recorder.

After about 45 minutes, Emmert had to go. As the NCAA moderator put it, the “student-athletes” from Connecticut were on their way to the lectern.

We’re talking about basketball. I think.

“We deal with the games on the court, as we should,” CBS’s Greg Gumbel said of the telecasts. “Because I think the average fan, once the games are on, doesn’t really care about the rest of that stuff.”

Gumbel isn’t wrong. I’d love to tell you the cool stuff I saw this weekend. I saw Dwight Howard’s face go up on the big screen and I heard about 80,000 people boo. I saw the Gators’ mascot, Albert, being led off the floor by a cheerleader after UConn dispatched his team. I saw the bear hug Jim Calhoun gave Kevin Ollie after the semifinal, which Calhoun withdrew after a half second, when he realized he was celebrating too soon.

I saw Calhoun give interviews all week as the Obi-Wan of the UConn program. He talked in the royal “we.” (“We have the kind of kids who listen.”) I saw Ray Allen and Rip Hamilton show up at the final as wise elders, a weird role for either of them, even weirder than Allen playing the aging marksman role for the Heat.

I saw Montee Ball, the ex-Wisconsin running back, show up in a frog costume and get denied entry to the floor section.

I saw a variety of reactions in the Wisconsin student section after Aaron Harrison buried that 3 on Saturday night. There were dudes with their hands clasped behind their heads. A couple of bros doing the robotic “Hey, we still got this” clap. And one guy, one particular broham, whose butt and thighs were just trembling. Shake Weight trembling. This was some feat, since everything above his waist was frozen. In those quivering hindquarters lies the joy of college sports.

I could say I loved nearly everything I saw this weekend. I could say we’re unlikely to have better sports in one place in 2014. I wouldn’t be lying. But it was there, the sound of a crack-up, pinging around that billion-dollar arena. When Shabazz Napier tweaked the NCAA on the HD video screen above, I stood at midcourt in piles of confetti. It’s probably worth noting the confetti was red, white, and blue.