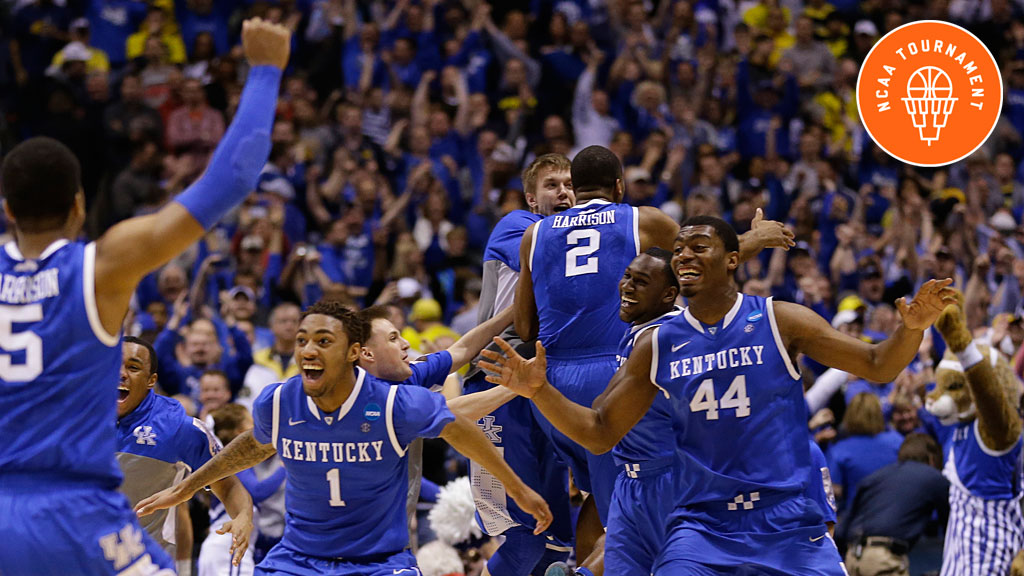 Once again, it’s lovely when a small Southern school is able to reach for its dream in the NCAA tournament. It does warm the heart to see the slipper once again fit on Cinderella, though in this case, it’s a high-end Jimmy Choo. It doth bring the cockles to a full boil to watch a bunch of kids band together for a single cause before they hit the silk 10 minutes from next Monday night and disperse to all points of the Association’s compass. In other words, it’s healthy now to just throw back your head and laugh at the way Kentucky does business, because the pure, obvious absurdity of it is a perfect window through which to observe the pure, obvious absurdity of college basketball. And at this point, after inveighing against the whole thing two years ago, when Wildcats coach John Calipari’s last great rent-don’t-own roster won the national championship, there is nothing to do anymore except laugh. Let us examine, for example, the saga of Marcus Lee.

Marcus Lee is a 6-foot-10 freshman from Deer Valley High School in California. He was a McDonald’s All American and a Jordan Brand All-American. He came to Kentucky along with eight other freshmen. Going into Sunday’s Elite Eight matchup against the Michigan Wolverines, Marcus Lee played 126 minutes. There were brooms in Rupp Arena that had seen more floor time than he did. Lee had taken two shots in Kentucky’s previous five games, and he’d missed both of them. And, Sunday night, before a hysterical final six minutes that led to Aaron Harrison’s game-winning 3-point shot and a 75-72 Kentucky victory over Michigan, it was Marcus Lee who came off the bench and kept his team close in the first half. What made this remarkable is that it was not considered remarkable at all, for what college basketball team doesn’t have a 6-foot-9 McDonald’s All American stashed away at the end of the bench, probably behind the Gatorade bucket, just for such an occasion?

“We had very little on him,” said Michigan coach John Beilein.

What Lee did was come in, rebound, and dunk. Four times in the first half. He also hit a layup. His 10 points and eight rebounds helped get the Wildcats, who in the first half once trailed by 10 points, a tie at halftime and set up the taut second-half ending in Harrison’s moon-shot closer.

“Spending this time with my family and my brothers is not challenging at all. Once you see that glare in your brothers’ eyes when they’re playing hard and winning games, you can’t be mad about [not playing],” Lee said, speaking of his teammates and his coach, who had predicted Lee would have a memorable game and kept chaffing his player about it. “He told the team I was going to have a big day,” Lee said. “Knowing us, none of us believed him.” 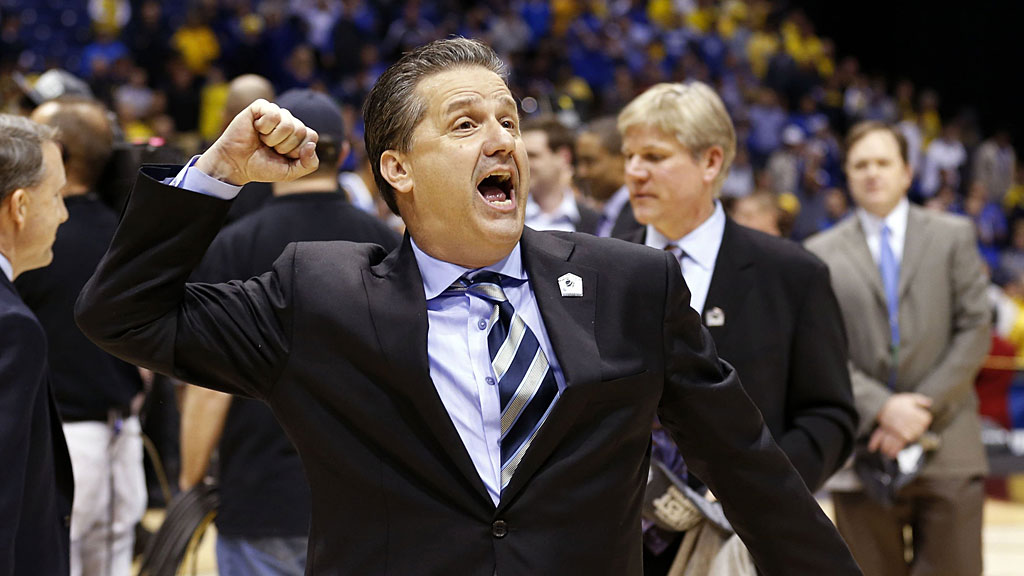 Before we get back to the heavy stuff about how Kentucky and John Calipari have gamed the NCAA rules and are now, amazingly, getting wide credit for being forward thinkers, and not simply opportunistic talent-hoarders, we should go through the last six minutes of Sunday’s game, because that’s the reason people still tune in to this absurd, wonderful event. Each team won and lost this game several times. Aaron Harrison turned into the deadliest shooter on the floor — sorry, Marcus — and Michigan’s Nik Stauskas made play after play, including two assists from the top of the circle that completely bamfoozled the Wildcats’ defense.

The extravaganza began with Kentucky’s seeming to have taken control of the game. Andrew Harrison hit a jumper to give his team a seven-point lead, 62-55, with 6:32 remaining. Michigan called timeout. At that point, the Wolverines looked battered and scrambled, having spent all night being mauled inside by Kentucky’s rotating cast of gigantic former McDonald’s All Americans. But Glenn Robinson III came out of the timeout and drained a 3-pointer. From then on, the teams missed a total of six shots over the rest of the game, and three of those misfires came on one Michigan possession that ended with a Jordan Morgan tip-in anyway, which tied the game at 72-all with 31 seconds left.

Michigan played that strategy perfectly. Aaron Harrison found neither a driving lane nor a passing lane and, with four seconds left, he backed up a couple of steps behind the 3-point line. Caris LeVert came out to meet him and almost got there, but Harrison was able to put a rainmaking arc on his shot. “I thought, That’s higher than he usually shoots it,” said Kentucky’s Alex Poythress. The ball went through, and Harrison was thereupon nearly swamped by onrushing teammates.

“I thought it was a pretty good contest,” said Caris LeVert.

“You don’t know how to feel,” said Aaron Harrison. 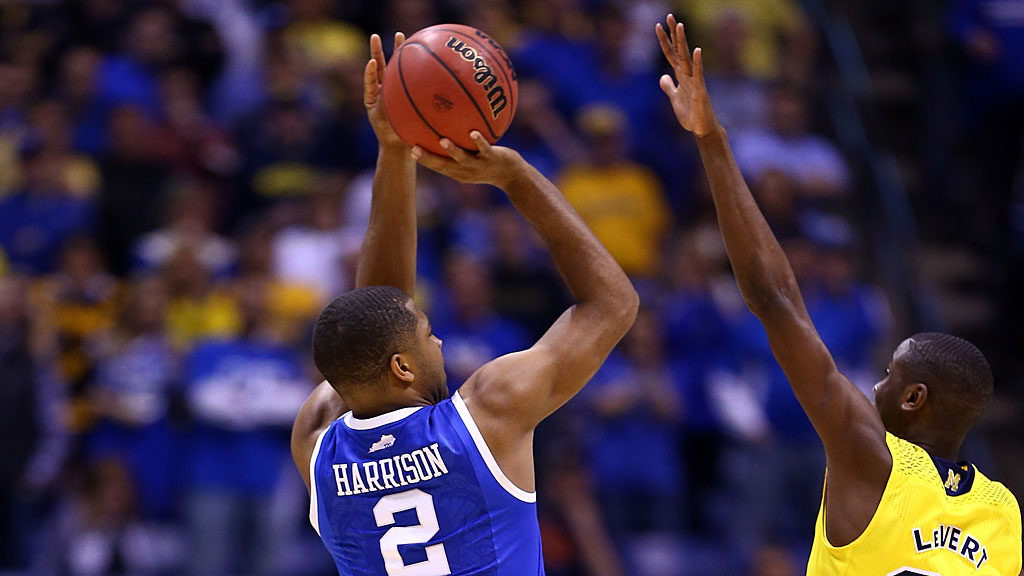 It’s what they count on — all the advertising sharks, and sponsorship remoras, and the seemingly limitless herd of buffet-grazing dilettantes that are the primary off-court phenomena at this annual rodeo. They count on all the greed and artificiality — and, yes, all the pure, obvious absurdity — to be redeemed by the play of the kids themselves. And this Midwest Regional final was nothing if not a contest of the remarkably young. There were only three seniors on both rosters. Kentucky started five freshmen, and Michigan started three sophomores and a freshman. This is the world the one-and-done rule has created. Even in defeat, one of the first questions asked of Michigan sophomores Stauskas and Robinson was what their immediate plans for the future might be. They both fobbed it off, but it hangs over almost every team in the field now. It is so omnipresent that John Calipari is currently getting credit as some kind of exemplar of honesty just because he embraces the new paradigm more ardently than anyone else. Before the weekend’s games began, he gave another extended lecture about how he is merely a delicate feather buffeted by the winds of change, about how he’s only a man trying to get by in a world he never made.

“We’re doing what we can do with where we are,” he said. “The rule is not my rule. I believe it should be a two-year rule. But it’s between the NBA and the players’ association. Has nothing to do with me or the NCAA. So I just think we’re all playing the hand we’re dealt. Kids are going on to the league from us and performing. And I’m proud of that. Would I like to have had them for four years? Yes. But I also like what’s happened for them and their families … You’re talking about great kids who deserve the opportunity and not at the expense of academics. We’ve had a 3.0 grade point average for the last four seasons. And they go to class. It’s not Internet, correspondence. They go to class, for four seasons. Brandon Knight was a straight-A student. Alex Poythress is a straight-A student. They all go to school. They all know why they’re there.

“The rule the way it is, I’m not punishing these kids. If they choose to leave, even though they maybe shouldn’t leave, but they still choose to leave, I’m going to support them. It’s their decision, for them, it’s not about me or about the University of Kentucky at that point.”

It’s hard to argue with the logic of it. Since the relationship between the NCAA and the NBA has become completely schizophrenic — so much of the resistance within the league to players skipping college is utterly cosmetic — you can hardly blame people for operating within the running room that relationship has opened for them. And, of course, it doesn’t always work — witness last year’s Kentucky team, which ended its season with a humiliating loss to Robert Morris in the first round of the NIT. Small wonder Calipari went through the drive-thru window at the McDonald’s Classic a few times in the offseason.

Truth be told, I’ve been watching John Calipari operate since he was an assistant coach at Pittsburgh, and I still wouldn’t trust him as far as I could throw a thoroughbred. But he has refined his rap extremely well. He is the Jerry Tarkanian for the new age; for the Tark, it was always about “the kids,” too, even when they wound up in hot tubs with hoodlums. Calipari has created a working model for the modern college game and now, remarkably, he is getting credit for having done so. And he will get even more credit, as his talented group of temp workers moves on to play in the Final Four in a stadium that’s too damn big for football, let alone for basketball. One last absurdity in a season built on it. This is a little miracle, is what it is. What can you do now but laugh?