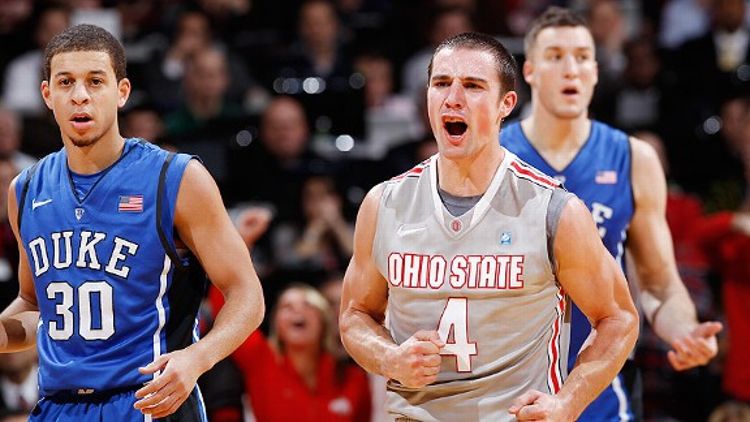 Don’t get too high, don’t get too low. A lot of famous folks have uttered those words, or some close approximation thereof. I remember Barack Obama uttered something like that during the campaign. Dollars to donuts ole Abe Lincoln uttered them too. In fact, I’d wager right here and right now — I would throw bills on your doorstep, amigo — that every single American president has uttered those words at some point. All of them except Taft. William Howard Taft didn’t have time for philosophical utterings; the man was an eatin’ fool.

And if it’s true in politics, it’s true in life, and we’d do well to heed the advice in the aftermath of Ohio State’s bludgeoning of the Duke Blue Devils. If you and I were prone to making extreme pronouncements, we might seat ourselves at an outdoor cafe, loosen our suspenders, and issue the following edicts:

That last one is actually true. Some people think I’m too hard on the Plumlees, and in a second, I’ll say something nice. Meanwhile, though, I swear to you that Miles Plumlee tried to take a charge on a bounce pass. It happened in the second half, with Craft driving left on a break. Miles was already beat, but might have used his height to block a layup if Craft chose to shoot. Instead, he froze in place, hands covering his nether-areas in that timeless drawing-a-charge pose. As I mentioned, Craft had him beat, and was not on a collision course. Nor did Miles attempt to anticipate a pass to Jared Sullinger on the right. He just planted his solid Indiana body between them, and when Craft’s pass came, it hit his leg, bounced back to Craft, and became another Ohio State layup. And dudes, the only conclusion I can reckon from that sequence, knowing what I know, is that Miles was trying to draw a charge on the basketball itself.

Which, considering the officiating of Ted Valentine and his crew up to that point, wasn’t such a terrible idea. But we’ll get there.

Back to the polarizing statements above — none of them are absolute facts. Here’s what I think is true about last night.

In essence, I’m pleading for a recognition of gray area. Ohio State deserves a big bucketful of credit, and any team on its schedule who isn’t terrified might be suffering from a pathological disorder that limits its experience of fear. But things aren’t always what they seem. This was the quintessential “slippery slope” game. Things started bad for Duke, got worse, and then it all went to hell. The Buckeyes narrative is a polar opposite. Shots were falling, the calls went their way, and Duke’s fatigue and nerves hamstrung them as the Buckeyes gained in confidence. The result was representative, but the margin and method were not.

Last season, Ohio State lost to Wisconsin by four on the road. It spoiled a perfect 24-0 record, and set up a classic revenge game back in Columbus. And man, did the Buckeyes get their revenge. It was a massacre, actually. You can imagine the delight of the pundits. The big dance started less than two weeks later, and anyone who was anyone picked the Buckeyes to win the title. As they should have. But today, look beyond the victory, and the excitement, and notice the past and the pending.

Past: Wisconsin beat them.

Pending: Both teams made the Sweet 16 and lost.

One night of excellence is just that. You can grasp at the larger significance, but it’s always a moment away from slipping through your fingers. Truth is tenuous that way. Better to abide by Kipling, and treat triumph and disaster as the same imposter. Don’t get too high, don’t get too low.