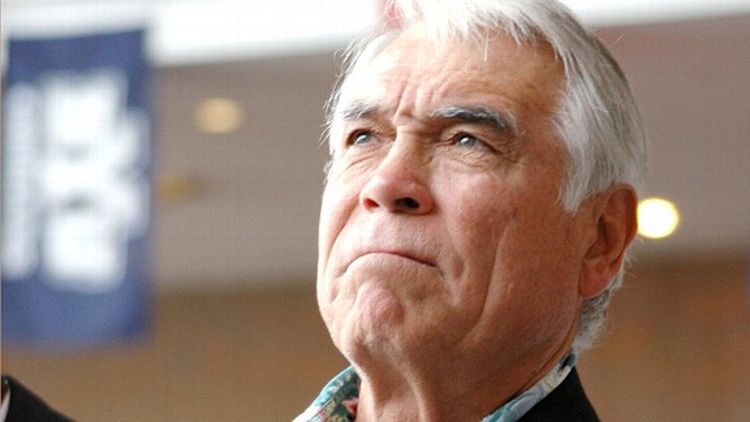 Editor’s Note: Welcome back to our series Rembert Explains the ’80s. Up until now, we’ve e-mailed 24-year-old Rembert Browne a video from the 1980s that he hasn’t seen. Rembert would write down his thoughts as he’s watching it, then we’d post those thoughts here. This time, however, instead of attempting to explain the ’80s, we tasked him with explaining the antics of those almost in their 80s. This first 80s installment was selected by our editor-in-chief, Bill Simmons: The Thrilla in Oldvilla — Joe Kapp vs. Angelo Mosca. If you have an idea for a future episode of Rembert Tries to Explain Why Old Farts Fight, e-mail us at triangle@grantland.com.

Why did this happen? Simple answer: Joe Kapp is cray.

I’ve been trying to figure out what it is that makes Joe Kapp behave the way he does, but it’s quite complicated. Let’s look at the series of events that took place leading up to the fight

1. Joe pulls out a flimsy set of flowers for Angelo.
2. Angelo, not amused, says “Put it up your ass.”
3. Crowd laughs hysterically.

If this were a Chappelle Show skit, the camera would freeze on Joe Kapp’s face and the announcer would say:

Though he could have ignored this off-putting comment from his former rival, sat back down at his seat, and continued with the discussion, Joe decided to … keep it real.

So Joe kept it real and put the flowers in Angelo’s face. How did Angelo take that? Not well, but he doesn’t really overreact and semi-responsibly swats Joe’s microphone out of his face. Joe, now in full “keep it real” mode, immediately starts a microphone sword fight with Angelo, which starts the rumble.

The Chappelle Show segment is called “When Keeping It Real Goes Wrong” for a reason. That reason: Keeping it real never goes right. Something in Joe’s brain told him starting a fight with an old man with a cane was going to win him some fans in the crowd. Dearest Joe, when has that ever been true? Apparently Joe’s brain hates Joe’s reputation, because what takes place over the next seven minutes is Joe becoming less and less likable in the eyes of the crowd and the online viewing public.

Why, Joe? Why, at an event partially honoring you and the sport you excelled in for so many years? Why pick a fight at such a happy occasion? It reminds me of a story. I’m going to tell this story right now.

In January 2009, I went down to Washington, D.C., for Barack Obama’s inauguration. I only brought a suit for the three-day event because I was determined to sneak into every ball and gala event that weekend. Like clockwork, I was denied entry in most places, but the one I did gain access to was the VIBE Hip-Hop Summit post-inauguration party. My girl Annabel and I made it in and, no lie, I was pretty pumped to celebrate the monumentus occasion with hundreds of happy, joyous black people. Let’s just say these naive feelings lasted for about 1.2 Heineken Lights, because 20 minutes into the regal reception, a fight broke out on the top floor, and people were being escorted out left and right. The thought, Can’t we just take a fight break for one day, people? kept running through my mind. That was the day I learned we can never take a break, not even on the night of the inauguration of America’s first black president.

Joe Kapp, while probably absent for the VIBE Hip-Hop Summit post-inauguration party, would have been thrilled with the fight that took place. Joe Kapp does not believe in taking a fight break for one day.

The reason he and Angelo were in the room together was because it was a reception for the 99th Grey Cup. His beef with Angelo Mosca stems from the 51st Grey Cup. That was like 200 years ago. I’ve already squashed my morning beef with Shannon, the Starbucks barista who put whipped cream in my Caramel Brulée Latte after I specifically told her “No whipped cream, Shannon,” but good ol’ Joe can’t not fight a dude with a cane that he’s disliked since his 20s.

Angelo, despite getting a pretty righteous smackdown, I applaud you. You are the clear winner in this battle. While Joe did knock you to the mat in the first round and it was unclear if you’d ever get back up, by the end of the eight-minute bout, you definitely won in a decision. As for you, Joe, I hope you have learned your lesson. I say that fully knowing that you never will, but I will continue to hope. While I think your days of getting publicly honored are over, if they are ever casting for Gran Torino 2 and Clint doesn’t want the role, expect your phone to ring, you mean, agile curmudgeon.