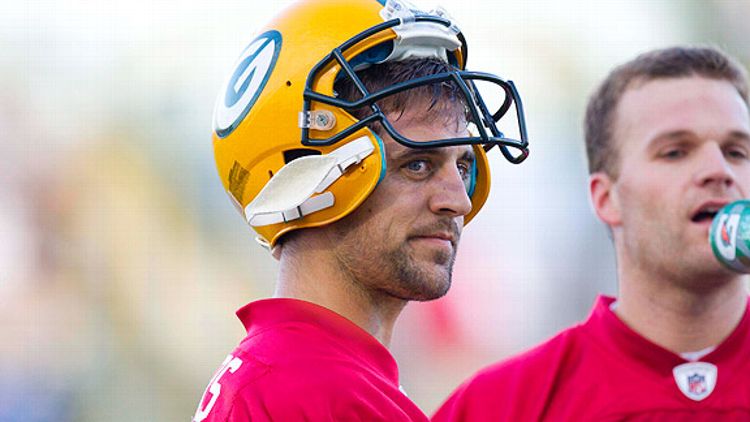 During the NFL lockout, there was no shortage of stories about player-organized workouts, with team leaders like Michael Vick and Mark Sanchez running unofficial practices for their squads. So why are we getting the distinct impression that those player-organized practices were maybe just dudes playing ping pong, pranking one another, and watching Flipping Out reruns?

If you could describe the collective performances of NFL offenses in this during this training camp in one word, you wouldn’t use a word. You’d just let out a guttural sigh.

Let’s take a look around the league and see who is dropping passes.

The Baltimore Ravens have seen veterans Willis McGahee and Derrick Mason beat it for Denver and New York, respectively. The result? You have the conch, Baltimore Sun writer Mike Preston: “On the offense, the Ravens are ugly. Passes are dropped. Timing is off. Pass protection has been poor, downright brutal at times.”

The Huddle: News and Notes From the NFL

Anthony Gonzalez Has Something to Say About HGH and Limitless

It’s a new day in Minnesota, with new coach Leslie Frazier, new offensive coordinator Bill Musgrave, and new quarterback Donovan McNabb. How’s that working out? “We’re not anywhere close to where we need to be in terms of precision in the passing game,” says Musgrave.

Meanwhile in Philadelphia, brotherly love is being expressed by the defense in the form of cleaning Vick’s clock in scrimmages. According to former Eagle and radio personality Garry Cobb: “One time Vick was hit by a bulldozer yesterday when the inside blocking got run back into his lap on one play versus the blitz.” More good news for the Birds offense, again, via Cobb: “Backup quarterback Vince Young has been struggling to learn the system. At times his group seems to struggle getting out of the huddle. A number of times when they did get out of the huddle, somebody was lining up wrong.”

In Cleveland, it’s Colt McCoy vs. The World. McCoy is trying to establish himself as QB1 for the Browns, a process made all the more difficult due to top receiver Mohamed Massaquoi being injured and rookie wideout Greg Little not being able to catch. Added to which, there are rumors that Terrelle Pryor could be Dawg Pound bound after the supplemental draft. So, yeah, McCoy is practically bathing in support over there.

You’d think the Green Bay Packers could just pick up where they left off. You would be wrong. How’s the Aaron Rodgers-led offense looking? Take it away, coach Mike McCarthy! “I don’t want to disrespect any of my players here, but we look great on paper. There’s no doubt about it. But we’re not close to where we need to be as a football team. We realize that. We have a lot of work to do.” Save the inspirational speeches for when they really count, coach!

It sounds like the NFL’s much-vaunted, pass-happy, electrifying, and entertaining offenses might take a few more weeks to gel. That being said, some players aren’t too broken up about the situation. When confronted with his coach’s less-than-rosy evaluation of his team’s play, Packers quarterback Rodgers invoked the God of Taking It Easy: Allen Iverson. “Practice?” he said. “We’re talking about practice? Not talking about the game, talking about practice, right?”

Much mirth was had in the press pool, then Rodgers explained, “We got tired … and there was a lot of mental mistakes. So we’ve got to pick up the urgency, I think.”

That sound you hear is McCarthy, storming off to Costco for a year’s supply of Zantac.