Derek Jeter’s Diary: We’re Not Even Talking About That A-Rod Thing 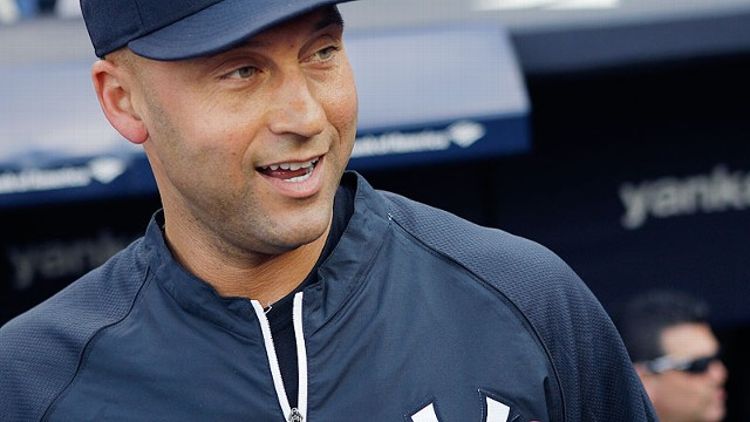 Before the game, I talked to the media about how things are going with my rehab. I know I’ve said in the past that I was done talking about it, and that it’s going to take as long as it takes, that I will be back as soon as superhumanly possible. You’re tired of standing there and giving the same sound bite, but everyone has a job to do, whether it’s the beat reporter who needs to write his 20th story on the progress of my ankle, or the shortstop who has to answer the same question over and over again, even though maybe he sometimes wishes that he could send a clone to hold its own press conference while the original Captain plays catch with his teammates during warm-ups. You know that the technology’s probably not there yet for that clone scenario to happen, but you’ve supplied the DNA to the appropriate parties just in case there’s a major breakthrough while you’re busy in physical therapy. You’d hate to miss out on that kind of exciting opportunity because you weren’t willing to part with a tissue swab from your cheek. It’d be worth it just to get out of one more round of ankle questions, and to potentially grow another decoy to send to create a distraction at a Starbucks on the other side of town so you could finally get your latte in peace. Maybe you’d even name the coffee clone “Philip,” not that you’d thought much about that or if the clones would be up for helping you juggle your social life, even though the mind has a lot of time to wander while you’re on the trainer’s table. You’ve always gotta stay focused on the task at hand and take it one therapeutic flexion session at a time.

But today you’d much rather be thinking about miracles in genetic engineering than the results of the game. David Phelps is a good kid, but he didn’t get out of the first inning. I don’t have the stats handy, but you’re not going to win much when your starter can’t even get two outs before he gets pulled. As Captain, you’re glad you’re around at moments like this in a young player’s development, so you can stop by his locker after the game, give him a pat on the back, and whisper a supportive, “We towed your Accord to Flushing. Better start walking now.” You hope he gets the message about embarrassing us against the Mets, and that he gets to the World’s Fair Grounds before the squatters make his car into a tiny mobile home.

You never want to say the word “sweep,” except when you’re using it to talk about your own domination of a rival. The opposite usage just isn’t in your vocabulary. You might see some brooms in the stands and hear the chants, but you can’t connect that to reality. Those people must be fans the Mets bused in from Queens who had to come straight to the Stadium from their janitorial jobs. Good on the Mets for showing that kind of appreciation to their local fan base, but security really should have confiscated the brooms. We could have set up a broom-check area for them, maybe given them baseball cards of all-time great Mets like Larry Berra and Daryl Boston so they could get the right broom back after the game. You’d hate it if people had to miss a day of work because they lost their brooms here.

It’s not been a good stretch for us at all. If the Boss were still alive, he probably would have fired Joe Girardi in the fifth inning, then tried to trade for Lucas Duda and Dillon Gee. I’m not saying that’s the answer. I don’t even know who Lucas Duda and Dillon Gee are. All I know is that Hal and Hank tend to be a little more relaxed than their father, who was the greatest owner in the history of sports, even if he occasionally overreacted to slumps by personally making back-page death threats through the tabloids. He just wanted to win more than the next guy, unless the next guy was me. No one wants to win more than I do, even Mr. Steinbrenner up in heaven, throwing his halo through his cloud-television because of the way his team is playing right now.

Tex and Youk are finally back. CC whiffed 10 and outpitched Jon Lester. Mo shook off his last outing and slammed the door in the ninth. That’s how it’s supposed to be. Well, except for the part where Jayson Nix is playing short. But there’s plenty of time to do this the right way from July through September. The All-Star break will be here before you know it. Well, not before I know it. I’m very aware of my rehab schedule. I’ve taken everything off the walls of my apartment in Manhattan except a giant calendar where I mark off every day I’m not playing with a red W, because it’s important to visualize every day you’re closer to getting back on the field as a win. I’m mentally undefeated since Opening Day and leading the rehabilitation division by 14 and a half games. In about a week I’m going to clinch home-field advantage throughout the playoffs. The Ws keep piling up.

If I had clones, I’d assign one to follow Kevin Youkilis around at all times. It might be nothing, but I don’t like the way he was making eye contact with Dustin Pedroia throughout the game. You want to see fire in those eyes when an opposing player dares to look in your dugout, but the fire’s just not there. A clone spy would be able to tell us if they’re secretly meeting up after the game and violating the Yankees’ very strict no-fraternization policy. The visiting team is your opponent, your enemy. You’re not supposed to sharing a bone-in rib eye at Peter Luger’s, laughing about the old days back in Boston. The clone could tell me if they ordered creamed spinach and extra thick-cut bacon. And things like if he’s giving them our signs, like the one someone gave Napoli when he hit that grand slam off of Hughesy. A clone could be really useful in situations like these. I’m sending in another cheek-swab tomorrow.

I could also probably train a clone to pitch. The physical ability is unquestionably there in our DNA; we just never really harnessed it that way, because we’ve always wanted to play shortstop for the Yankees. Fast-track a clone through the minors and in two to three years he’s a top-of-the-rotation starter. Maybe you even accelerate the development schedule and break him in through the bullpen after Mo retires. We’ll have a glaring need there next season if David Robertson doesn’t pan out. The possibilities are limitless. Closer by day, spy by night.

There’s no reason this can’t happen. It almost has to happen. I was thinking too small on the Starbucks clone. I see that now.

You have to feel bad for Nick Swisher. You see him trying so hard to look like he’s having fun with the Indians, but you can tell it kills him to come to the Stadium and not be a Yankee anymore. There’s a light gone from his eyes. He really loved New York, and New York loved him back when he wasn’t choking in the postseason. That’s just the way it is here. There’s nothing wrong with conditional love if the condition is getting back to the World Series.

No one forced him to sign that big contract. He probably could have come back to us for a massive pay cut. Money’s not everything. Winning is. You hope he’s enjoying all those trips to the Rock and Roll Hall of Fame, but you suspect it gets kind of old after the ninth or 10th time you wind up there because the Steamship Mather museum’s already closed for barnacle maintenance.

“Don’t go on the Internet right now, Jetes. There’s some bad stuff out there. I don’t want you to read it.”

“What are you talking about?”

“No matter what happens.”

“I’m in my safe place. No one can get me here. Just promise, Jetes.”

“I promise our relationship will remain the same.”

“Thanks, Jetes. I knew I could count on you.”