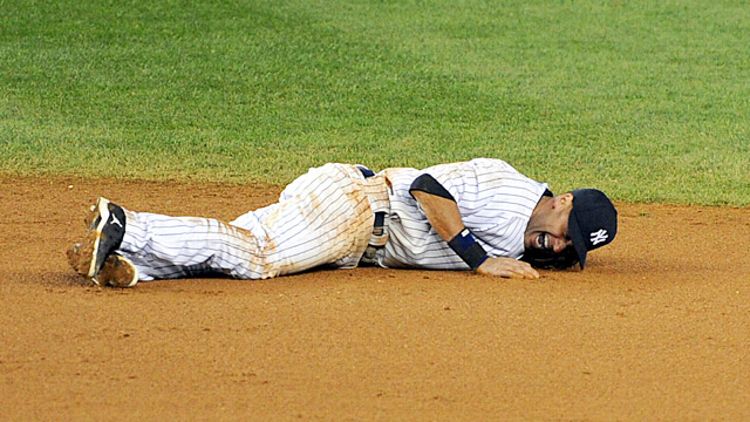 Games like tonight’s are why you play baseball: to compete at the highest level, against the best competition, with everything on the line.

To be a part of the game’s incredible history, and to see history being made right in front of your eyes.

And to watch True Yankees being born.

Even down 2-1 in the bottom of the ninth, you never give up hope, because this is a team that never quits, a team that can produce a different hero every night. Usually you hope that the hero is going to be one of the regular heroes, the ones with the nine-figure contract, because that’s what the money is for. But sometimes it’s the guy you least expect. The guy off the bench. The guy pinch-hitting for a first-ballot Hall of Famer because of a manager’s gut feeling.

The guy who launches a game-tying homer in the ninth. The guy who follows it up with a game-winner in the 12th.

The guy who leaves the batter’s box a role player, a pinch hitter, a useful piece.

The guy who crosses the plate a True Yankee.

After a game in which a True Yankee is made, there’s a secret ceremony in the Chamber of Legends below the Stadium. As Captain, I’m not allowed to disclose what happens there. It might involve a blessing with Lou Gehrig’s shin bone, a deep gaze into the Babe’s petrified eyeballs, a light dusting with the Boss’s ashes. It could be all or none of those things. You don’t know. You’ll never know.

Because now he’s a Yankee forever.

Even if he winds up in Cleveland next season.

And on other nights, no new True Yankees are born. That’s because there’s a rule that we can create only one new True Yankee per five-game series. You never want to argue with traditions this sacred, but there are definitely times, like when Eric Chavez pinch-hit for Alex Rodriguez with two outs in the bottom of the 13th, where you might be tempted to hope for a little wiggle room on that. In an extra-innings pressure situation, it’s just not possible to assemble all the living members of the True Yankee Committee and vote on an exception. And there’s definitely no time to initiate the process of reviewing A-Rod’s True Yankee credentials that would normally be triggered by being replaced twice in two crucial games. This is all technical, procedural stuff you’re not even thinking about. You’re trying to win a ballgame. A playoff ballgame. The review process will happen in the offseason if necessary. We’ll fly everybody in, there’ll be a nice lunch at Yogi’s place, maybe a little light karaoke afterward (everyone does “New York, New York,” over and over), the whole deal. But not now. Now we’ve got a series to win.

The Big Man put us on his back and carried us into the next round. And we’re finally, finally free of the Orioles. They pushed us to the limit, hanging in there for 167 games and proving that they’re a very good baseball team. You have to tip your cap to Buck Showalter for the tremendous job he did with his club this season, but you also have to be careful he doesn’t steal any hair or scalp flakes from that cap, because for all you know his gypsy’s powers grow when she’s got some personal organic material from her target, and next year they’ll all come back even stronger. But if they do, we’ll be ready. We’ll have extra security for the hats. You can’t be too careful.

The mood in the clubhouse was ecstatic because it was a long, hard-fought series. By now everybody knows how I consider all locker room celebrations prior to the world championship ill-advised and premature, but as Captain, sometimes you’ve got to read the mood of your teammates, dilute the clinch-juice a little so at least people aren’t immediately vomiting it back up, and let the guys cut loose for a night.

And nobody was pretending to celebrate harder than A-Rod. You feel for the guy: pinch-hit for twice, benched in the deciding game, and now he’s got his arms draped around Raul and Chavvy’s shoulders like they’re some conjoined, three-way, $30 million-per-year platoon player.

“Hey, Jetes. Come hang with me and my playoff heroes!”

He squeezes them around the neck so hard they spit up their drinks.

But before I can join them, Swish dumps a bucket of Gatorade on my head. I think I hear Alex inviting them both over to his place to get their centaur portraits done, but I can’t be sure because Boonie’s already in my ear, asking if he can have my sweatbands.

The answer is no, by the way. It’s always no.

By now I assume that everyone’s heard the story. And I have to admit, if I were at home watching the game, I’d be pretty worried about me too. It’s probably upsetting for a lot of fans, especially since it all happened at the end of a game in which we had another amazing comeback (thanks, Raul), albeit one that fell a little short this time. That’s why I told Girardi, “Don’t carry me. I’m gonna do it myself.” I knew the image people would have in their minds if I didn’t walk off the field under my own power.

And so I did. I don’t know how I did it. I also don’t know how I watched myself do it from on top of the Mohegan Sun restaurant in center field, but it happened. I know it did. I got up, slowly, kicked the dirt out of my cleats, and made my way to the dugout, tipping my cap to the crowd as I disappeared down the steps. And then I looked back out into the Stadium before heading up the tunnel and saw, high in the night sky, the faces of Jorge Posada, Mo, and Pettitte. Nodding to me, like they knew something I would soon know. (Yeah, it was weird that Andy was up there, since he started the game. But you don’t question moments like this, you give yourself over to them.)

I went straight to the trainer’s room and locked the door. By the time Steve Donohue and Cashman found the key and forced their way in, I had already made my own splint from some gauze and the fresh shards of a commemorative “27 and Counting” bat hanging on the wall. I was ready to go. But they told me the game was over. They told me that I wouldn’t have been eligible to return anyway, ignoring the fact that the umpires definitely would have made an exception to the substitution rules given the circumstances.

They told me my ankle needs three months to heal, minimum.

They told me it was something I couldn’t play through.

They told me it was the end of my season.

They told me a lot of things.

And then I told them, in front of the entire clubhouse, a clubhouse now filled with an emotionally shattered team in need of its Captain after its darkest moment of the season, that I would be back. Playing shortstop.

And that’s when Reggie Jackson sneaked up behind me and jabbed me in the neck with a syringe full of elephant tranquilizer.

They tell me it took three shots before I went down. That I fought to the very end trying to show everybody how stable my improvised splint was. That I made an impassioned speech about never giving up, not even when Mr. October tries to kill you with Dumbo smack.

But it wasn’t enough. I still woke up handcuffed to a gurney in a heavily guarded private room at Columbia-Presbyterian, with Casey McGehee and Andruw Jones standing watch at the door, and spent most of the day being pulled in and out of various diagnostic tubes. You have a lot of time alone with your thoughts inside those things. And I thought only about returning to the team. About the things I would tell them before the game. Just go out there and win. About leading by the heroic example of escaping the forced captivity of a hospital bed. About how I would bribe Casey to take a walk to the commissary, slip by a napping Andruw, and make it to the Stadium before the first pitch. About beating the Tigers, finishing out the ALCS, and getting to the Series. About how my plan was unstoppable.

And then they wheeled me back to my room.

Where Reggie was waiting with another syringe.

Yesterday’s game did not go well. And now I’m in North Carolina. You know what’s in North Carolina? Not the Yankees. Not the Tigers. Not any playoff baseball. Just a world-renowned foot and ankle specialist I’m seeing tomorrow. And some decent barbecue, which I cannot eat, because in October I am nourished only by winning. It’s also possible the tranquilizers are suppressing my appetite as they work through my system.

I am not loving North Carolina.

It’s almost sick that I’m aching so badly for Detroit.

I’ve made something of a compromise with the team and the medical staff: They let me appear in the clubhouse before the game via FaceTime, and I promise no further escape attempts. Last night got a bit hairy. I’m not going to get into it, but let’s just say some people will do almost anything for a signed jersey.

So there I was, on an iPad in Detroit, back with the team. I said some things. They said some things. Boonie may have sobbed like his family died in a wildfire. But that’s all between me and the guys. Just go out there and win. Captain’s privilege will let me reveal only that much. Then everybody scattered to go prepare for the game.

He grabbed the iPad and brought it to a quiet corner of the locker room.

“I have to confess something, Jetes. I did something bad, and they caught me.”

He reads me the New York Post story about how he tossed a baseball to some girls to get their numbers. After Girardi took him out of the game. The game where I got hurt.

“I’m sorry, Jetes. You weren’t hurt yet. When you got hurt I stopped trying to have sex with them. I swear it.”

“Did you eventually have sex with them?”

“No, it turns out neither of them work out that much. What do I do, Jetes? The media is all over me.”

“When they ask, say nothing.”

“Even if they ask more than once.”

“Even if you really, really want to tell everybody all about how cute they were, and how you invited them back to the hotel to sit on a saddle on your back while you do push-ups.”

“Verlander is hell on righties.”

“Be ready if you get the call.”

Alex never got the call. Verlander was hell on everybody.