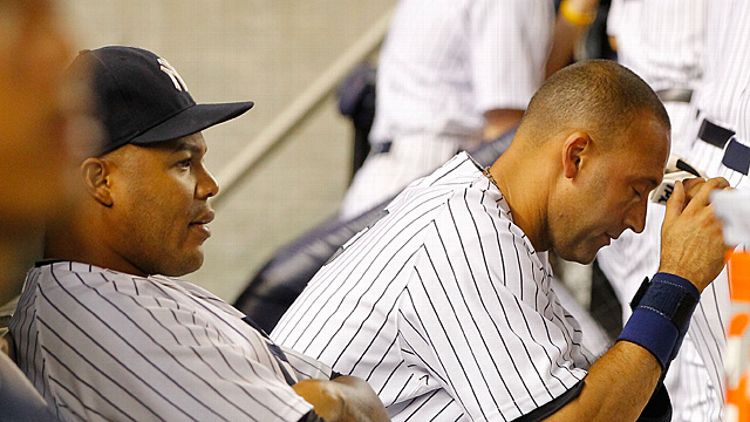 A baseball team is 25 guys. No one player can win a game all by himself, not even the Captain, whose job is to go out there and do his best with whatever combination of future Hall of Famers, superstars, current All-Stars, former All-stars, guys who will soon be All-Stars, and random, interchangeable bench/bullpen guys the manager surrounds him with on any given night. Look at the W itself: It’s like two V’s stuck together, symbolizing teamwork, something that’s greater than the sum of its two V-parts. I’m not going to speculate on the symbolic meaning of the L, because that letter is not a part of my vocabulary. To even recognize its existence to make a larger point about the beauty of a team coming together in the name of winning makes me physically ill. As soon as I’m done with this sentence I’m going to pause and eat some five-grain toast to settle my stomach. OK, I’m back now.

This all was just an artful and considerate way to recognize the contribution of one of those nameless role players who made tonight’s win possible. So, Jayson Nix, thank you for the pinch-hit double that saved the game. With A-Rod out for a while, we’re going to need for you to run into one like that every so often, even if we kind of secretly hold our breath every time you step up to the plate or have to take a ground ball in the field. It’s not you, you seem like a solid kid, and you try very hard, it’s just that sometimes one gets a little nervous when a franchise with a $200 million payroll is putting a guy who makes less than Alex’s traveling tips-froster out there. But we’re glad you’re on the team. I wouldn’t have dedicated this diary entry to you if we weren’t.

Please don’t bring this up on the flight tonight and make it weird for me, part of being a good team player is accepting a compliment quietly, from the bench-player section of the cabin. If you want face-to-face validation, that’s what the fist bump is for.

Speaking of making things weird on the flight home, yesterday Alex sits down next to me, which usually never happens because I pay Cody Eppley $500 per plane trip to take the seat next to me and pretend to be asleep to prevent exactly this kind of encounter. But Cody had to use the bathroom — I forgot to offer him an extra $500 to hold it until we landed, so that’s on me — and A-Rod saw his opening.

“Will you sign my cast, Jetes? All the guys are.” He waves his cast at me. There are no names on it.
“How about you get Swish to go first? He signs big, I don’t want him to sign over my name.”
“It would really mean a lot to me if you went first.”
“I don’t have a Sharpie.”
“I have one right here.” He holds up a marker, and I notice he’s got a newspaper in his lap. He’s finished a Sudoku puzzle, but instead of numbers there are big red letters in all the boxes, spelling ARODAROD in every direction.
“All right.” I take the marker and go to sign.
“Wait!” He pulls the cast away. “I want you to write something special.”
“I was going to go with ‘DJ2’.”
“Not special enough. Come on, Jetes.”
“How about, ‘Get well soon — DJ2’?”
“Can you do ‘I miss you out there already. All my best, Derek.’ And write out the Derek, no initials, it’s more personal.”
I write exactly that.
“And maybe just add an exclamation point after ‘already’? It’ll feel more heartfelt, like you can’t wait to get me back.”
I add the exclamation point. He rips the marker out of my hand and draws a ring of stars around the area I signed.
“Pretty special, Jetes.”
He returns to his seat without asking anyone else to sign the cast.
When Eppley gets back from the bathroom, I take my $500 back.

10-3, a good win at home against the Sox, not much to see there. Ichiro’s first game as a Yankee at the Stadium, it must have been nice to finally go out there to right field and not have the Bleacher Creatures constantly threatening to fly to Japan to kidnap his family. Yeah, they get a little carried away sometimes, but you can say this for the Creatures: Once you put on the pinstripes, the threats to your loved ones’ personal safety tend to slow down significantly.

Got home and watched the Olympic Opening Ceremony. I love the Olympics, even if 90 percent of the competitions don’t involve real sports and they’re run by a bunch of short-sighted monsters who removed baseball from the medal program. Think about that: Baseball is the most popular sport in the entire world, if you don’t count all the economically underdeveloped countries where kids grow up playing soccer with animal skulls because that’s all they can afford. How can they skip baseball for the Games? You hate to be the type of person who dreams up very plausible conspiracy theories, but it’s hard to ignore the feeling that Bud Selig probably engineered the whole thing so that the Olympics wouldn’t mess up the MLB schedule. It’s unpatriotic to deny players the opportunity to play for their country’s pride or to beg off with nagging injuries so that they can rest up for the stretch run. You just don’t take that decision out of our hands, even if you’ve secretly appointed yourself Commissioner for Life and colluded with the IOC to treat baseball like it’s less important than dancing with ribbons. Which is beautiful, don’t get me wrong, but come on.

Anyway, the Opening Ceremony was fantastic. I didn’t care much for the part about ancient British history, but the modern history stuff where James Bond and the Queen jumped out of the helicopter was pretty exciting. She’s in amazing shape for her age. You love to see older monarchs staying active like that, it’s so easy for them to get lazy and just ride around in those heavy thrones on giant sticks the peasants have to carry around.

Tough one we’re not going to dwell on. It’s a long season, you have games that don’t go your way at the end.

Word came down that the Angels — we all hate the Angels — traded for Zack Greinke. Yeah, I know that there were a lot of people who thought that Greinke’s not cut out to play in New York, but even if your front office isn’t interested you hate to see him go to a team you might see in the playoffs. After the game Mike Trout texts me (I threw out that phone he gave me but somehow he got my number, kid’s got hustle), and we have this exchange:

Don’t worry, I had someone check on Greinke. He’s OK. No stab.

The Olympics can be really rough, man. Your heart goes out to that poor Jordyn Wieber girl on the gymnastics team. You do everything right, you’re the reigning champion, and then you watch your dreams ripped away from you. Personally, I can’t relate to the feelings she must be experiencing because I’ve achieved every one of my dreams in the most spectacular ways imaginable. But I can still recognize that living in a universe where a break might not go your way must be a very hard thing to come to terms with. I think I’m going to lend her my ’96 Series ring. I know it always makes me feel better.

The less said about this recent problem we have with one-run games, the better. Let’s just say this: It’s bad luck. You just go out there and play as hard as you can, and at the end of the day, you hope you’re the team getting the breaks in the close ones. Not even the gypsy has the power to influence scores down to this specific kind of level. If she could do that, wouldn’t she move to Vegas and become some kind of sports-book gypsy billionaire? People don’t think about that side of it when they get obsessed with the power of black magic. Maybe if they were as powerful as we all fear, their main income wouldn’t be illegal Yankee Stadium souvenir sales.

That being said, now Tex is hurt. You don’t want to say there’s something sinister about all these players going down, especially because maybe you obsessed on the idea so much last week that you spent more time than you’d like to admit Googling “reverse evil injury death curse fast playoffs soon.” Just FYI, you’re not going to find quality hex reversals on Yahoo Answers or eHow. Mostly it’s a lot of “dont anger gypsies LOL.” Thanks for nothing, Internet.

Ivan Nova gets in these weird stretches where he seems to lose his focus and forgets how to pitch. In the middle of that seven-run inning, he stepped off the mound like he was going to the rosin bag, but then he just kept walking toward the outfield. I thought he wanted a conference, so I go over to him, and he’s all, “What? Oh. I thought I saw a butterfly out here, I wanted to say hello to it.” The bases were loaded at that point. In that kind of a situation, you have to put the butterfly out of your mind and execute your pitches. Your new butterfly friend will probably still be there between innings if you’ve got something really important to say to it.

Before the game, Cashman made another move, getting Casey McGehee for Chad Qualls, who we were about to cut anyway. It’ll be nice to have another guy to fill in for Alex while he’s decorating his cast. The trade deadline’s a weird time. Sometimes you suddenly find yourself with a bunch of new teammates to help with the stretch run, and then you hope those players realize they’ve been traded into a great situation, and they don’t dwell on the part of the transaction that basically says, “My old team didn’t want me anymore, so they started making these sad phone calls where they ask, ‘Hey, what will you give me for this bag of garbage, maybe it has some value to you?'” That’s just the wrong attitude to take. There’s that saying: “One man’s garbage is another’s treasure.” You’re now our treasure. The part-time, role-playing kind that we’ll toss out at the end of the season, but treasure nonetheless. Be the treasure, not the garbage.

And I hate to say I told you so, but the ring worked. I knew it would.